A Lyric Mapping Of "The Revolution Will Not Be Televised" 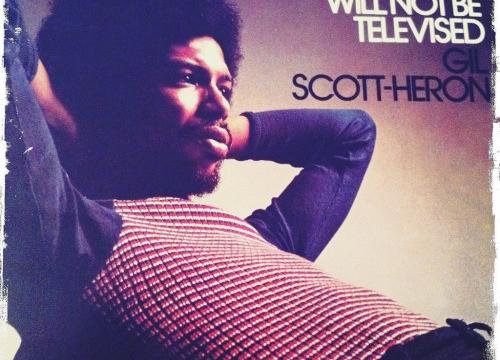 We are still fresh from grief regarding soul-and-jazz poet Gil Scott-Heron, who passed away just this last summer in May of 2011. But here, we will attempt the awesome task of paying proper due to "The Revolution Will Not Be Televised", his most famous work. It started as a poem, then was translated to a song and released on the debut album Pieces of a Man released in 1971. "The Revolution" was of course a general reference to the counter-culture movement and its hopes of overcoming consumer capitalism... with quite a heavy reference to the Black Power movement. It's more of a motor-mouth rap, delivered almost in the style of a hopped-up street preacher, jamming and cramming 1970-era cultural references into every single line.

The overall meaning: In interviews, Gil Scott-Heron pointed out that the message is that people who want change need to make it happen themselves. They cannot sit at home on the couch and wait for the revolution to come out of their TV sets. Now, in 2011, think about the Internet activism of today, where online rallies result in web poll jamming, website hacking, DDoS attacks, "money bombs", online petitions, angry blog posts, ranting YouTube videos, and the occasional in-person protest... attended by about ten kids in Guy Fawkes masks who don't even know who Guy Fawkes was, but only bought the masks because they came from a comic-book movie. Can you smell the modern cultural relevance? Today, we can just as easily say "the revolution will not be blogged".

LSD evangelist Timothy Leary coined the expression "tune in, turn on, and drop out" for the experience of expanding the mind with psychedelics.

"You will not be able to lose yourself on skag,
And skip out for beer during commercials,"

"Skag" is a slang term for the drug heroin. "Commercials" are of course TV commercials. just about everything here references some then-current meme in television, particularly commercials, most of it now lost to history.

"The revolution will not be brought to you by Xerox
In 4 parts without commercial interruptions."

Network "movie specials" typically boasted of limited commercial interruptions - if you watch a flick on video sites like Hulu.com today, they spiel almost the exact same line! Xerox is a photocopier company... Back before the whole computer revolution, photocopying documents, together with the electric typewriter and, later, the mighty FAX machine, was the whole basis for information exchange in our society. Remember, this was 1970. Ken Thompson and Dennis Richie had just invented Unix and the C programming language the previous year!

"The revolution will not show you pictures of Nixon
blowing a bugle and leading a charge by John
Mitchell, General Abrams and Spiro Agnew to eat
hog maws confiscated from a Harlem sanctuary."

Hoo-kay: Nixon is of course the 37th US president and was in office in 1970, but had yet to fall to the infamous Watergate scandal - however, his popularity was very low in the liberal and democratic ranks, even from the beginning.

John N. Mitchell was Attorney General under Nixon... and was one of the people who advocated wiretaps as a way to keep civil order (gee, that kind of backfired).

General Creighton Abrams was a prominent general in the Vietnam War. Kind of like General "Stormin'" Norman Schwarzkopf was in the 1990s Persian Gulf War, Abrams was the chosen media darling as far as the news cameras were concerned.

Spiro Agnew was vice-president under Nixon. Like later vice president Dan Quayle under George Bush the First, Agnew was frequently the butt of many jokes about his incompetence, especially after his "hatchet man" image, his speeches filled with Daffy-Duck-like alliteration, and his later criminal charges of accepting bribes while in office (no, really, he pled no contest and resigned!).

"Hog maws" were pork parts from the "soul food" parts of the pig, similar to "hog jowls" which you can get in most stores even today. And the "Harlem sanctuary" would be a shelter / soup-kitchen in the poor parts of the neighborhood of Harlem, Manhattan.

"The revolution will not be brought to you by the
Schaefer Award Theater and will not star Natalie
Woods and Steve McQueen or Bullwinkle and Julia."

Schaefer Award Theater was a TV program airing box-office films from 1959 to 1970 - it was also hosted by Dick Clark. It was sponsored by Schaefer Beer - and guess what? Their airings of films were advertised as being shown "in four parts without commercial interruptions"! See how it's coming together? Woods and McQueen are actors you already know, "Bullwinkle" was the cartoon character from The Adventures of Rocky and Bullwinkle and Julia was not an actress but a TV sitcom airing from 1968 to 1971 - controversial at the time for its depiction of racial relations.

"There will be no pictures of you and Willie Mays
pushing that shopping cart down the block on the dead run,
or trying to slide that color television into a stolen ambulance."

Willie Mays, African-American major-league baseball player. "Sliding a color TV into a stolen ambulance" might be a line to evoke the 1965 Watts riots and other riots sparked by racial unrest in the '60s and '70s.

"NBC will not be able predict the winner at 8:32 or report from 29 districts."

"Pigs" was common slang for the police. "Brothers" was the common slang for black people. Yes, as with those aforementioned racial riots, police did indeed shoot rioting blacks. "Instant replay" was a then-new feature of sports broadcasting, where they'd re-show a clip of an interesting play in slow-motion. Hence - clever joke! - the line is repeated twice!

"There will be no pictures of Whitney Young being
run out of Harlem on a rail with a brand new process.
There will be no slow motion or still life of Roy
Wilkens strolling through Watts in a Red, Black and
Green liberation jumpsuit that he had been saving
For just the proper occasion."

By now, you should have tumbled to the idea (see the "overall meaning" section at the beginning) that these are humorous, sarcastic scenarios that would have happened had the revolution been televised. But since it isn't, they aren't happening. If this were in a modern context, we'd be saying something like "Your favorite political candidate will not become president of the Internet if you upvote his post on Digg.com".

"Green Acres, The Beverly Hillbillies, and Hooterville
Junction will no longer be so damned relevant, and
women will not care if Dick finally gets down with
Jane on Search for Tomorrow because Black people
will be in the street looking for a brighter day."

Green Acres and The Beverly Hillbillies were both TV sitcoms poking fun at American rural life - the former about city folk who move to the country and the latter about country bumpkins who strike oil, get rich, and move to the city. "Hooterville Junction" was the fictional setting for both Green Acres and another TV sitcom, Petticoat Junction, which seems to have been shut out of the reruns unlike the former two shows. Search for Tomorrow was a TV soap opera running from 1951 to 1986.

"There will be no highlights on the eleven o'clock
news and no pictures of hairy-armed women
liberationists and Jackie Onassis blowing her nose."

OK, feminists are not all hyper-masculine lesbians as implied by "hairy-armed", but this was a common expression then. Jackie Onassis was Kennedy's widow, and her taped interviews were just recently making a big splash in the news - ironically considering this song, Jackie O is purported to have described MLK as "horrible". Keep in mind she was in shock from her husband's assassination. The images of her crying at her husband's funeral were very fresh on the public's minds in 1970, having happened in 1963.

"The theme song will not be written by Jim Webb,
Francis Scott Key, nor sung by Glen Campbell, Tom
Jones, Johnny Cash, Englebert Humperdink, or the Rare Earth."

Well, finally, we're back in our home element here on Lyric Interpretations! Jim Webb was a singer-songwriter known best for "By the Time I Get to Phoenix" and "MacArthur Park". Francis Scott Key wrote our national anthem. Campbell, Jones, and Cash need no introduction here; we wish we could say likewise for Englebert Humperdink, a UK pop star who had some popularity in the US in the 1970s. Finally, Rare Earth, a Detroit, Michigan group, was the first all-white pop band signed to Motown Records, best-known for their song "I Just Want to Celebrate", but current in 1970 for their debut charting single hit "Get Ready".

For our finale rack of pop-culture commercial references, "White tornado" = Ajax cleanser, "White lightning" = the original name for the beverage we know today as "Mountain Dew", "Dove" = Dove antiperspirant, "Tiger in your tank" = Exxon gasoline, "Giant in your toilet bowl" = Ty-D-Bol toilet cleaner, Coke is the same pop you have now, "Germs that may cause bad breath" = Listerine mouth wash, "Put you in the driver's seat" = Hertz rental car.

That's it, folks! Hope it was fun!

Now for a final bonus buck: Literary types, go dig up a copy of Harlan Ellison's short story collection Strange Wine and read the introduction (it goes on for some ten-twenty pages). It is titled "Revealed at Last! What Killed the Dinosaurs! And You Don't Look So Terrific Yourself!" and it's another anti-television rant. It bears mentioning because it was written in the 1970s as well, and Ellison, himself very much a civil-rights supporter, sounds like he was picking up right where Gil Scott-Heron left off.