Are You In The Moog To Read About This Synthesizer? 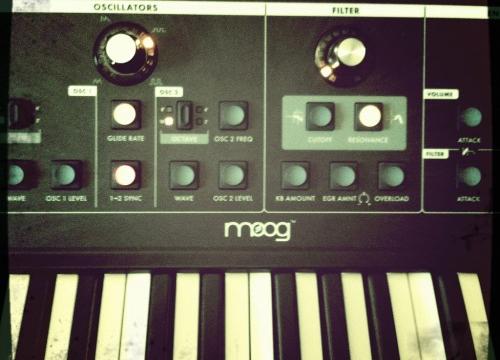 What do the films Tron, The Shining, and A Clockwork Orange all have in common? Besides all having synthesizers in the soundtrack, they all had the same composer whose work shows up in the score. That would be Wendy Carlos - but more about her in a minute.

Last April of 2011 marked the 40th anniversary of the first live performance of the Mini-Moog synthesizer, which opened the door for rock bands to tote a Moog around with them on tour - previously, your standard synthesizer filled a room. Emerson Lake & Palmer, Manfred Mann's Earth Band, Kraftwerk, and Parliament/Funkadelic would all feature Mini-Moogs heavily in their work. As recently as 2011, Radiohead used a Mini-Moog on their The King of Limbs album, so the wave hasn't receded a bit.

But, oh, what a strange and colorful sound it has, and so it is fitting that a strange and colorful character would have the force of personality to drive it into the popular mainstream. So we come back to Walter Carlos, a composer and electronic musician - no mistake with the name, watch and we'll show you a magic trick later! He worked closely in the studio with Robert Moog, the synthesizer's inventor. Carlos' first claim to fame was the 1968 album Switched-On Bach, featuring a Moog synthesizer rendering classical pieces by Johann Sebastian Bach.

Switched-On Bach went on to become one of the first classical albums to sell 500,000 copies and go platinum. It hit the Billboard album charts running and stayed in the Top 40 for seventeen weeks. Finally, it took home three Grammys in 1970. Nevertheless, it took a lot of nerve in 1968 to run an old master's work through such a specey, new-age-sounding instrument and confidently release the results.

Walter Carlos had a lot of nerve. And so, in mid-career, Carlos underwent a sex-change operation and became - presto! - Wendy Carlos, and then kept right on going with her career like nothing had happened. Well, she did do an interview for Playboy magazine on the subject, in which she told about how she'd felt like a girl trapped in a boy's body since age six. She later regretted make such a public spectacle of her variable gender, however, and has been semi-retired from the media since then, while continuing to quietly work on her music.

Her studio, in the bottom of a renovated New York brownstone, is entirely enclosed in a Faraday cage, just so that outside radio and television can't disrupt recording sessions. Wendy Carlos does nothing halfway.