BEWARE! Monster Riffage On The Loose! 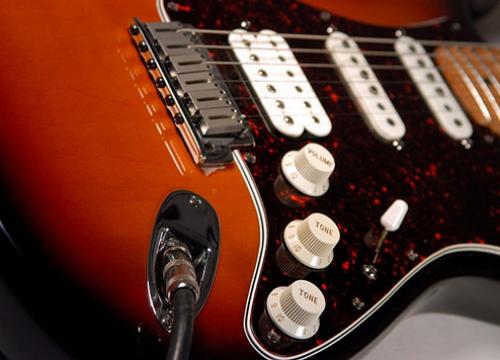 Call it musical profiling, but there is a certain demographic (male, white, early-40s to late-50s) that has a love affair with The Riff.  If you grew up anytime from the early 70s to the early 90s, you might just have an unnatural desire to hear rock riffs.  It's probably an incurable condition; especially if it survived New Wave, post-Punk, and Grunge.  From Jimmy Page to Angus Young to the late Steve Clark (Def Leppard) and beyond, the riff has served as the appetite-wetter before the full course of the song.  Indeed, some songs don't live up to the riff that serves as the vanguard.  Want to have some fun, ladies?  Ok, do this at your next social gathering where members of the aforementioned demographic, replete in the their khaki cargo shorts and golf shirts, stand around mulling over the latest episode of Top Gear: slip Judas Priest's British Steel CD into the party boom-box, select "Breaking The Law," and prepare thyself for a massive amount of "Oh, duuuuuuuuuude!", metal horns waving, and balding heads a-banging.  There's something visceral about a GREAT riff.  We men of a certain age (cough) will react instinctively and in gloriously hilarious ways when we hear certain notes and chords.  Now, there are some songs that are already in the Riff Hall of Fame: Welcome to the Jungle, Back In Black, Crazy Train, the aforementioned Breaking the Law, etc.  I won't waste our time by going over them here; they've earned the pass directly into Rock history.  Instead, I'll look at some underappreciated, perhaps unknown riffs and offer them up for Hall of Fame consideration.

First, we need to define the "riff."  It can be a series of single notes, played in a pattern that has more hooks in it than my dad's old tacklebox.  Or, it could be some single notes combined with chords, played aggressively.  For example, Welcome To The Jungle is an example of the former, while Back In Black represents the latter approach.  It is usually only a single guitar, with the other instruments joining in once the ROCK has been established, or sparingly and in accompaniment to the guitar.  The Merriam-Webster online dictionary defines "Riff" as: "1. an ostinato phrase (as in jazz) typically supporting a solo improvisation; also: a piece based on such a phrase."  Yeah, that's about right, only replace "jazz" with "rock" and you're closer to my meaning.  It's a phrase, a segment of music to kick off the song.  Usually, the riff is provided by the lead guitarist, but there are a few bassists who contribute some stellar intros, as well.  Here is a selection of fist-pumping riffs that perhaps you know, but perhaps not. Paperback Writer- The Beatles.  "The Beatles?!?" I hear you say.  Yep- gonna go old, OLD school with my first listing.  After the acapella vocal intro, there's this brief, but tasty riff, probably from George, to get the song going.  The song is a bit fluffy, but you can't deny the feeling you get from hearing an overdriven Gibson SG being pumped through a Vox amp.  The video shown here, though tame by today's standards, was purported to be the first ever music video created.

Mob Rules- Black Sabbath.  I passed over the already inducted Black Sabbath songs (Paranoid, War Pigs, etc.) and instead included this song featuring the late (and always great) Ronnie James Dio.  Ok, maybe it's already in the Hall of Fame, but Mob Rules has one of those intros that immediately gets you in the mood for headbanging.  Tony Iommi remains one of the masters of metal guitar and this song is a testament to his maximum riffage.

Limelight- Rush.  Rush comes across as intellectual, urbane, stylish, and above the nitty-gritty of all-out rock.  Which, is mostly true- these three incredibly talented individuals compose some of the most complex and thought-provoking music, and have for decades.  During the 80s, they laid on the synthesizers pretty heavily, watering down their sound and making it even more progressive.  That said, this song off of 1981's Moving Pictures, contains one of the greatest, if not THE greatest, Alex Lifeson riff in their catalog.

Wrathchild- Iron Maiden.  One of two bass riff intros in this entry, this song is a must for this list, as Steve Harris is among a handful of bass players who can hold their own against any lead guitarist in terms of musical impact (with Geddy Lee, Glenn Hughes, Billy Sheehan, etc.).  Harris writes, or has a hand in writing, almost all the songs for his band, and writes on his bass, not a guitar.  As such, bass lines such as this, and the trademark "gallop" that Maiden is known for, showcase his playing style: fingers flying (he never uses a pick) and bone-rattling.  This riff is short and definitely sweet.

You've Got Another Thing Coming- Judas Priest.  More chording than riffing, this still qualifies, IMO.  Instead of a dominating pattern by Glen Tipton, here we have the whole band joining in.  Tipton's a phenomenal guitarist, and the rest of the band isn't chopped liver, is it?  The sort of drive, the chugging pattern of the riff became a staple of heavy metal as the 80s dawned.  Many of the bands lumped into the NWOBHM (New Wave Of British Heavy Metal) owe a great debt to Priest, though they themselves were considered the "old guard" by the early 80s.

All Nightmare Long- Metallica.  Ok, this song breaks convention by starting out with a soft intro (non-riff), but at :47 begins a wonderful guitargasm.  Hetfield can really write some bone-crunching stuff and this is a prime example.  There's so much to choose from with Metallica, but perhaps this song, which comes from their Death Magnetic CD, might have passed by some headbangers who haven't yet forgiven the Metallica lads for Load and Re-Load.  Maybe I'm in the minority, but this whole CD is killer.

Black Country- Black Country Communion.  One more bass riff to finish things up.  This is a sort of new-ish group (formed in 2009); a supergroup some would say.  The man on the bass is Glenn Hughes, an icon of hard rock and metal.  Joining him in the riffage after Glenn's part is Joe Bonamassa, a fretwizard who made his name early on as a blues player.  The drums are handled by Jason Bonham, a fine drummer in his own right, but you might know his daddy as the drummer for Led Zepplin.  Finally, Derek Sherinian, a former member of prog metallers Dream Theater, handles the keys.  Talented?  You bet.  Riffmasters?  You're damn right!

Other songs with great riffs:

Get Up and Go- Damone

Nailed to the Gun- Fight

The Devil You Know- Anthrax