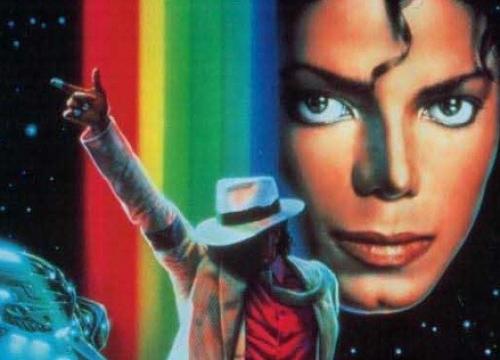 What was the epitome of craziness in pop music culture history? You could nominate a few incidents - The Beatles' out-of-context quote that they were "bigger than Jesus", Lady Gaga showing up in a meat dress, or The Monkees' Head. Those are all good. But for me, what tops it is Michael Jackson's period between Captain EO and the last gasp of his Moonwalker days.

What makes this so special is that Jackson's ego had inflated to the point where he could play space buccaneers and mystical fantasy superheros and take it all seriously. At the same time, it is crucial to note, he was really, really good at it and everybody loved him for it. The more outrageous he got, the more popular he became, and nobody was on the sidelines saying "Oh for God's sake this is ridiculous!" the way they were long about Elvis' 13th movie or so.

Michael Jackson sweated cool in the '80s. He could do no wrong. His legal troubles and scary masked eccentricities were in the future yet, but he was still having a blast being the outrageously rich playboy.

First, he became a ride at Disneyland:

While it isn't 3D, here's the full thing:

Captain EO was little more than an extended music video at 17 minutes. However, the production cost a whopping $30 million.

You'll notice a common theme through all these works: Michael Jackson plays a character whom is only empowered by music. And when thus empowered, he can shoot some kind of energy beam out of his hands. He also makes his enemies join him for a dance, through some kind of mind-control or just the sheer power of his charisma. Oh, and a perfectly executed moonwalk amidst the dance numbers. You'll see all of these tropes again.

Then he became a straight-up mythical figure

Moonwalker premiered in 1988, to squealing fans everywhere. It grossed close to $67 million worldwide, after production costs of $22 million. During this time, Jackson had slowed the pace of his recording career; Thriller was 6 years earlier, and Bad had just come out, with Dangerous still 3 years in the future. But he still maintained his magical energy and popularity.

And then he became a video game

It seemed Jackson could even outdo KISS at self-promoting hyper-marketing. No, don't go thinking that Jackson alone would be the only rock star to have his own video game - there's the arcade Revolution X (Aerosmith), the Genesis pinball game Crue Ball (Motley Crue), and KISS arcade pinball, and that's not even touching the dancing / rhythm games.

But most other rock-star-themed video games had, up to that point, but cheap knock-offs of on-rails shooters or pinball machines. Big deal, you took an existing games and added decals / sprites plus changed the soundtrack. But with Michael Jackson's Moonwalker, you had a completely original game, with cutting edge production values for 1989. Jackson reprises his character from the "Smooth Criminal" segment of Moonwalker, being a dancing, singing, beam-shooting figure who defeats various henchmen on his way to rescue kids from Mr. Big (rather cliched name for a villain, no?).

Here's a whole play-through on the most superior version, the arcade machine:

And that's still playable today, given the right install of the XMame emulator and a bootleg ROM. (Ssssh, didn't hear it from us!)

It was shortly afterward that Jackson truly began his fall from grace. While a few murmurs of scandals had begun to dog him, and he was already responding to them in the "Leave Me Alone" segment of Moonwalker, he still had to together enough to be on top of the world, even if a little eccentric. Perhaps we all simply... loved him too much?

Somewhere in the ancient sutras (whether Hindu or Buddhist), there must be a word for the level Jackson reached during this period. He tapped into a cultural undercurrent, and merged with it perfectly. We don't get to see this often, no matter how many pork chops Lady Gaga wears.