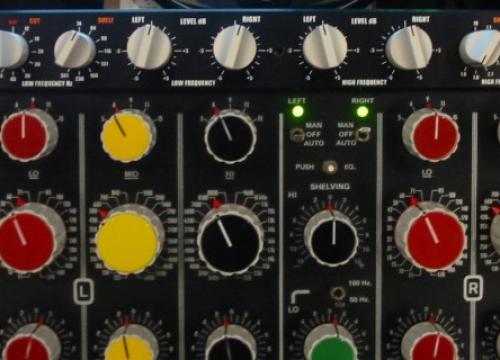 "There's a man who lives a life of danger..." So goes the song "Secret Agent Man". But what about music itself - can it be dangerous? Not just irritating or obnoxious, but actually present danger to the mind and body? We say no, and anybody who says different is full of bunk.

But here, presented for your objective speculation, is the list of the closest things we can find to music that meets the potential definition of "dangerous". So steel your nerve, gentle readers, as you prepare to explore the most threatening sounds we know of! And WARNING: Uh, this is completely full of bunk, but if you're sensitive, prone to epilepsy or cardiac problems, or have a peanut allergy or something, we urge caution before you go hunting any of these audio elements on YouTube.

This is the latest thing with the kids now that it's no longer fashionable to smoke incense or snort bath salts. Binaural beats are auditory rhythms which allegedly can have the same effects on people as recreational drugs. We can't wait for this defense to be used in court. Anyway, it's supposed to stimulate beta brain waves or hypnagogic states or something.

This reeks of those sensationalist "warnings" they posted about horror films back in the '50s where they warned people that they could die of fright when the mummy came onscreen. But The Flaming Lips' 1997 album Zaireeka was chock-full of weird experimental stuff, and came with an actual warning sticker that its six track had a mix of high and low frequencies that could trigger "premonitions". Ri-i-ight. Nevertheless, a sudden premonition while you're, say, driving could distract you enough to plow into a parked car, so we'll just caution you not to Flaming Lips and drive.

Along with the massive moral panic in the Western Hemisphere about teen suicides and demon possession in heavy metal music, a song by Hungarian pianist Rezso Seress is also known as "The Hungarian Suicide Song", because press reports in the 1930s alleged about 19 suicides with the song. Just like our fabled Ozzy Osbourne, you just have to hear this song blaring out of a radio nearby and it's off the balcony you go. Incidentally, the composer himself did commit suicide - first attempt was jumping out of a window, then, upon waking up in the hospital injured but still pulling oxygen, stifled his disappointment by seizing a nearby wire to strangle himself, hence finishing the job. So we'll give this song a five-star rating on this list, since at least it might have killed somebody.

Anything played on a glass armonica - Danger: Insanity

As you can see, we're willing to bend around any criterion to include something on this list, so we'll go with an instrument which itself is rumored to be dangerous. Now, the original belief was that playing it for a career could give you "melancholy" - in other words, giving you a general case of the Mondays. But modern opinions have it that playing the glass armonica gives you lead poisoning because you spend all that time rubbing lead glass. Huh.

A performance of the Blaster Beam - Danger: Female, um, stimulation

When it comes to dangerous threats from music, as well as something that comes straight out of a cyberpunk novel, you can't beat "sonic rape". But that's basically what allegedly happens to your girly bits when you sit in front of the Blaster Beam. Reportedly, females were stimulated by the vibrations at a live concert once, which prompted a radio station in Australia to play "The Beam" on a loop and ask the gals to call in if they felt anything (and, presumably, if it was good for them). The attempt at radio sex, alas, did nothing for the ladies this time, which means either the effect is only felt live... or the station just needs to get a bigger broadcast tower, if you know what we mean.

"My Way" - Danger: Performing it can get you killed

In the Philippines, karaoke performances of Frank Sinatra's hit "My Way" lead to altercations and outright murders so often that My Way Killings are an actual thing. In fact, see, "karaoke rage" is even a thing. Since karaoke is so universally hated, even by vegetables, without even shedding blood over it, we'll guess that you should extend the precaution of not selecting "My Way" to just not doing karaoke at all. There, that solved that.

"The Elements: Fire" - Danger: It can drive Brian Wilson nuts

It may not be dangerous to you, but it was the studio rehearsal of this song, from the infamous "Smile" album, that led Brian Wilson of former Beach Boys fame to go loony when a coincidental fire broke out nearby. Wilson suffered from the delusion that his song had a magic curse and could start fire whenever it was played. Any one of us would say, "Hey! Alternative energy source!" but Wilson went into a fugue of depression and drugs and paranoia and all the bad mental things we know happened to him.

There are tons of urban legends about various sound frequencies. There's high frequencies, low frequencies, everything in between. They're supposed to do anything from make you feel creepy to give you uncontrollable cramps to drive you to vote Republican. There's also a related set of frequencies variously cited to be the infamous "brown note". But through it all, you can research these and come up with no confirming evidence to any of it. One of the most common cited "sonic assault" frequencies is 17 Hertz - this is supposed to be the magic number which is just below the normal range of human hearing, but your... um, guess you could say "subconscious ear" can hear it and it makes your hindbrain freak out and think you see ghosts. OK, here's a link, here's another link, examples probably won't be effective on your phone, tablet, or laptop, so good luck verifying any of this.

In fact, good luck verifying about any of that entire list.

If anything, Adam looks like he kinda... enjoyed that... in a Blaster Beam sort of way.