Do We Really Need All These Punk Genres? 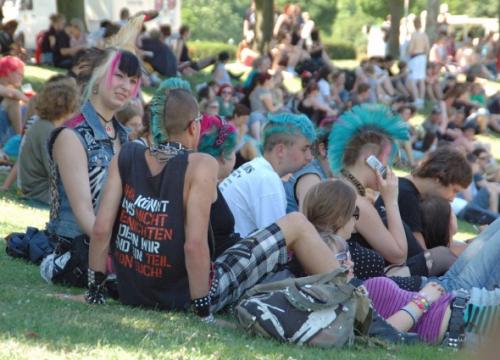 Apparently, punk is the cheese of the music world; you can make any kind of punk genre just by taking an existing genre, slapping on some humor, anger, or irreverence, and calling it the punk version.

But you have to wonder sometimes if they've carried this just a little too far.

Christian Punk - Before you start laughing, check out The Crucified. Look, if you're going to do Christian rock (a genre from which even most Christians recoil in horror), you might as well make it sound good, right? The Crucified, long-since broken up, hailed from Fresno California in 1984, which basically makes them the Velvet Underground of Christian rock, and extra hardcore for having come from a middle-of-nowhere place like Fresno.

Glam Punk - Granted, we have New York Dolls, and then we have... well, those New York Dolls are something, aren't they? They're good - Check them out in "Jet Boy," they know what they're there to do and they do it. But, seriously, who dances to this? Who pops a New York Dolls album on while they're commuting to work?

Taqwacore - That little clip you're watching is from an upcoming documentary on taqwacore - Islam punk. Why let Christians have all the punk fun? You have to love how the literature states that Muslim punk dates all the way back to 1979 - really? All the way back to the beginning of the '80s? Were there people then? Watching the trailer, even Che Guevara, the T-shirt icon, can't believe it.

Chicano Punk - We've got to admit, Chicano rock sounds damned good when it gets punky. It's just such a tiny genre that you have to wonder why they don't just call all of it Chicano rock and be done with it. But here you will find such delights as Tito & Tarantula, who were good enough to appear in From Dusk Til Dawn, the Cruzados, who don't want you to remember that their music was part of Roadhouse, or the enviable The Plugz up there giving you the Spanish version of "Secret Agent Man," which was part of the soundtrack to Repo Man, which automatically grants them hardcore punk status forever even if they do nothing but accordion polkas for the rest of their lives.

Cowpunk - You're picturing a Holstein with a mohawk and pierced udder (this milk tastes like... Aquanet), but this is actually punk's answer to country, making country music even goofier and cornier than it already is. You're probably thinking "Cotton Eyed Joe" is a good example, and you're right - but Rednex actually made that for a novelty song and in Germany they're bigger than the Beatles while remaining a one-hitter over Stateside, so we'll leave their story for another day (pst! "Old Pop In An Oak" is almost the exact same song anyway). So instead we'll give you Goober and the Peas, with their hit "Hot Women (Cold Beer)."

Psychobilly - This genre is a surprise, because you take '50s rockabilly and combine it with '70s punk, and you get a pretty smooth fusion when you were expecting a mess. Add in that the lyrics tend to sound like your '50s-era innocence and optimism, which you then stabbed in the brain with a dagger made of pure methamphetamine which left a wound that was allowed to get infected. So instead we'll just let you glimpse "Zombie Dance" by The Cramps, like you haven't heard it a billion times before.