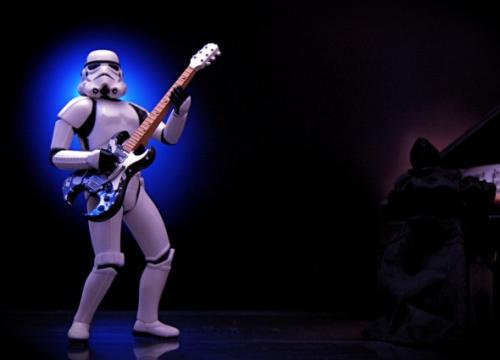 Few things impress your peers with your geeky knowledge of music trivia better than knowing a band mascot's name. Because then you can drop the name in conversation, everybody goes 'who?' and you get to point at the album cover. Oh. Him. They've been looking at the same face for six albums now and never thought to wonder what its name was. Now lean back and smirk.

By far, the most famous example. Eddie is that snarling, bug-eyed, sorta-mummy / sorta-zombie monster adorning the cover art of most Iron Maiden albums. He's wielding a katana on Maiden Japan, he's pulling the devil's strings on The Number of the Beast, and is chained, straight-jacketed, bald, and screaming on Piece of Mind, plus a slew of other appearances too numerous to count. Sometimes he's even playing a role, such as an Egyptian pharaoh on Powerslave and a dragon-like creature on Live at Donington. A model of Eddie is onstage at most any Iron Maiden concert - sometimes even animated!

Vic is a skeletal figure with patches riveted (or otherwise fastened) over the eyes, ears, and mouth, signifying the three-monkeys trope "see no evil, hear no evil, speak no evil." The mascot was originally created by Dave Mustaine himself. Vic is part of a skull design on Killing Is My Business... and Business Is Good!, a real-estate agent in front of an apocalyptic scene on Peace Sells... but Who's Buying?, armed for combat on So Far, So Good... So What!, and in real style on Rust in Peace in a slick business suit along with world leaders, presiding over a cryogenic coffin and brandishing a glowing emerald... whatever that means.

Snaggletooth is a kind of (boar / bear / gorilla)... beast combination always shown with prominent tusks and fangs, usually also sporting German-military-style helmet, spikes, and chains. It always invokes biker and leather culture. First seen on the cover of their self-titled second album, turning into a glowing effigy for Overkill, becoming one of the rings on the hand of Iron Fist, transforming into a train from hell on Orgasmatron, and various other incarnations. Also called "War Pig."

Murray is the demonic horned figure on many of Dio's albums. On Holy Diver, he's the one swinging the chain and appearing to be drowning a priest, appearing as a vision in the sky for The Last in Line, and looming in the bedroom window for Dream Evil.

Little more is known about it than its name and appearance, but this is the little face with spiky eyebrows and mustache and always seen sporting a twisted, raving smile. Sported on many a T-shirt. A unique case, because he's not usually shown on album covers.