Little Boxes and the Horror of Sterilized Suburbia 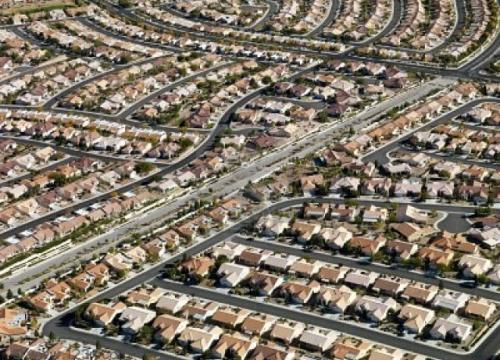 If the bland, saccharine nightmare of Ira Levin's The Stepford Wives didn't hammer home what a skewed utopia lies at the heart of the American dream, the culture wasteland depicted in the suburbs of the film Edward Scissorhands bears further testament. Something very reminiscent of pod-people lies deeply embedded in American culture. And one woman knew it.

Malvina Reynolds was a folk singer and activist throughout the '60s. She wrote songs for the likes of Joan Baez, Harry Belafonte, and Pete Seeger. While she wasn't Billboard chart material, her work was considered important enough to be commemorated by the Smithsonian Folkways label.

One of those songs was "Little Boxes", which became a bit of a hit for Seeger. Here's the whole she-bang:

It should come as no surprise that Reynolds was inspired to the song after getting a look at Daly City, California, which does indeed resemble the typical suburban sprawl. But there's no reason to single out just that city; the state of California is practically tiled with them, with Orange County being a great example with the tranquilized cities of Irvine and Mission Viejo. But then there's Seaside and Celebration in Florida. And Detroit and Flint, Michigan, whose present state should attest to what's wrong with creating vast housing-tract deserts. And there's New Berlin, Wisconsin, and there's Darien, Connecticut, where one of the movie versions of The Stepford Wives was filmed. And the gentle reader could probably name about three or four suburbs near them which fit this trope, too.

They all look just the same, don't they? The Hivemind. The Borg. The conformists, the plastic people... Frank Zappa, peace be upon him, had a song about the "Plastic People" residents of the little boxes:

And from those houses all the same, we move to the desks all the same in the classrooms all the same, and get jobs in cubicles all the same... oh, were you reading this in your cubicle? Oh, pay no attention to this crazy doublethinking nonconformist blog! We really do love Big Brother! Return to your work, drone #45027-K4D1, and continue your progress to the realization of our glorious empire!

Here's a bit of a (student-made?) history lesson about Pete Seeger and "Little Boxes", including its use in the hit Showtime TV series Weeds:

Now, you have to ask, is the "Little Boxes" effect still happening today, and has it had an effect on the people who have now had a couple of generation to take it for granted? Well, here's a couple of recent news stories answering just that question:

So Many Hands to Hold in the Classroom

As Children's Freedom Has Declined, So Has Their Creativity

I'm sure you could all find more, but really, what's the point? This post has already grown as dreadful and depressing as Holocaust statistics, in the combination of terror and despair in reaction to the modern age which I like to call "Industrial Gothic". But don't let it bother you! You go on and get a good night's sleep now, in your bed with the white sheets and white pillowcase and down comforter on a wood frame with its back to a windowless part of the wall... just like all the other beds.