Me and My Wine - Getting in the Spirit of Things 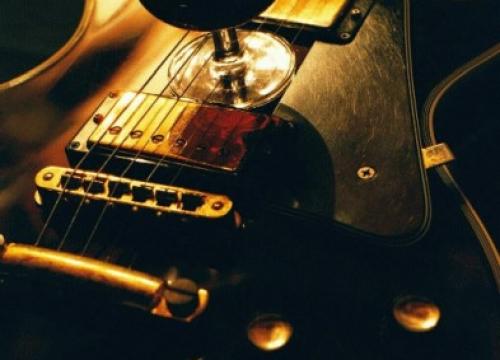 Music, love, and life have been linked to alcohol since the days the ancient Greeks used to call upon Bacchus for a revel or two.  Excess of one will usually lead to another, I've found.  Too much to drink?  That's the perfect time to strike up a conversation with whoever has caught your eye.  Love troubles?  Drown your misery in a pint or twelve.  Sitting around singing some old tunes with friends?  Ah, the ol' throat gets parched and needs a libation.  Had far too many shots of tequila?  Why yes, I *would* love to hear your karaoke version of "Someone Like You."  You see the connection, as have countless artists and musicians before us.  While the old Rocker mantra is "Sex, Drugs, and Rock-n-Roll," one could be forgiven if the "drug" of choice is fermented, brewed, or distilled, rather than grown or manufactured in a lab.  At the heart of the matter, love (or lust), alcohol, and music can, and often do, provoke in us feelings of euphoria and the quest for the existential- what are we here for and can we not just capture this moment and hold it as our guiding principle?  Obviously, no, or else we'd be relying on drunk and/or horny engineers to build bridges that were prone to "going limp" at the wrong moment.  Nonetheless, life is made up of a string of connections and experiences that lead us, inexorably, to our terminus.  Somewhat depressing, I'll agree, but it's the journey, set to wine and song, that we should focus on, not the destination.  However, as Freddy Mercury once sang, "Too much love will kill you," and Bon Scott proved, too much booze will do you in as well.  Let's take a brief moment to examine the instances where music and alcohol coincide.

Well, to be accurate, Neil Diamond came up with the track originally, but the UB40 version was most popular during my impressionable youth in the mid-80s.  It's a sad tale of lost love and how our hero copes with the sadness by drinking copious amounts of red wine.  I think we have all either been in that position, or know someone who "self-medicates."  Don't think I'm promoting this treatment method, mind you- I've been sober for over a year now.  But, before I hopped on the wagon, I used to drown my sorrows with a tumbler (or three) of bourbon every night.  The more upright among us would say "drink never makes your problems go away," which I find to be only partially true.  Getting good and hammered could quiet the angels and demons sitting on your shoulders and help put it all in perspective.  "Red, red wine . . . it's up to you-ooo-oo . . . "

Me and My Wine- Def Leppard

I have a love/hate relationship with Def Leppard.  I love the first album and half of the 2nd, but then hate everything they did after that.  Well, "love" in this case is perhaps too strong a word, but I must follow the form of the old saying.  "Like (or tolerate)/Hate relationship" just doesn't have the same ring to it.  This song, from the 1984 re-issue of the aforementioned 2nd album (High-n-Dry) is *not* among those that I "love."  In fact, it sets the pattern for Def Leppard over the rest of their career: Joe Elliot's screechy, no-range vocals, pop-sensible hooks, rousing, sing-along choruses, inane, meaningless lyrics, and an accompanying video that shows the lads in all their "I'm so drunk and we're such lads" clownishness.  Mutt Lange, proper marketing, and minor variations on these themes pretty much helped catapult Def Leppard into the ranks of both "superstardom" and "music irrelevancy."  But, here they are singing about boozing it up and how, waking up bleary-eyed and hungover, they're "doing fine . . . just me and my wine!"  It's nice to know that, when all else goes wrong, you can still count on the numbing, euphoric effects of high-potency wine to make it all better.  Unless, of course, you drink a shitload of the vino and then decide to go tearing off down the road in a vehicle, right Rick?

One Bourbon, One Scotch, One Beer- George Thoroughgood

Thoroughgood, a rétro troubadour who appears to revel in his status as the spokesperson for The Association of the Perpetually Inebriated, provides us with this rollicking, raucous ode to three of the finest things in life: bourbon, Scotch, and beer.  I can certainly vouch for the first of the three- I used to love the product of Kentucky to a dangerous degree.  Here, George bemoans his cash flow (he doesn't have any), which leads to him getting tossed out by "the landlady."  Where does he wind up?  Why at the local watering hole, of course (after first trying to crash on a buddy's couch, but that was a no-go with his buddy's wife)!  Life is not looking good for our anonymous hero.  But, he knows the secret combination which can make it all better: 1 bourbon, 1 Scotch, 1 beer.  Round after round this appears to go on and he develops a chummy relationship with the bartender- "Look here man, come down here.  He got down there.  So what you want?  One bourbon, one Scotch, one beer."  It all seems so simple, but is mixing all those varieties of alcohol a good thing?  Granted, bourbon and Scotch are from the same family, but who invited beer to the party?  They should know that mixing is never a good thing.

Here's comedian Jim Breuer to tell us all about the party in your stomach . . .

Too Young to Die, Too Drunk to Live- Alcatrazz

Another volatile mix, this time Yngwie Malmsteen (guitar) and Graham Bonnet (vocals), could produce sparks and this is one of those songs.  This is more of a Public Service Announcement on steroids, with Bonnet drawing the connection between substance abuse and the stress of modern life and of growing up as a kid with massive peer pressure.  Early in the song, Bonnet sings about "chemical kids lost in the street, looking for some kind of savior."  But the real payoff is the glimpse of the future, where the adults may be "alive," but they're not really living.  "Ten years from, look how they've changed- they're so mature and respected . . . makes them laugh, they were such fools, so unaware of the real, live world . . . 'Honey I'm home, fix me a drink, It's been a long, hard day and the boss drove me crazy' . . . Watching the clock on the wall for the happy hour"- he sings, noting ruefully that while adults may sneer at kids for boozing it up, they're not much different.  It's all just a matter of coping methods, I guess.  Though, for others, it's a final way out . . .

Perhaps the ultimate poster child for substance abuse, Father Ozzy talks to us about the dangers of alcohol.  Of course, Ozzy battled his demons in a very public way (unfortunately) and now it's somewhat cliche to pick on him, but this song is still a powerful reminder that the bottle can also be a dead end (literally).  Now, I'm not preaching- this is just one of the songs that I happen to love, so I included it.  This video is a brilliant live performance, featuring the late (and still great) Randy Rhoads on guitar.  Right off the bat, you know this isn't going to be a happy, feel-good song: "Wine is fine, but whiskey's quicker . . . suicide is slow with liquor."  Yeahhhhh, it doesn't really translate well to a holiday greeting card.  I hear this song and always think of Nic Cage in Leaving Las Vegas.  Listen closely though, and you'll hear that Ozzy is telling people: you may think drinking yourself to death is a way out, but it's not, it's just nothing.  "Take a bottle, drown your sorrows, but it floods away tomorrow's."

Whiskey In The Jar- Thin Lizzy (as performed by Gary Moore and Friends from "One Night In Dublin: A Tribute To Phil Lynott")

I don't think I could write an article about drinking songs without including an Irish artist because, seriously, the Irish treat drinking like an Olympic sport.  I was a student in London back in the 80s and sat in a pub with 3 friends (Americans) and 1 Irishman (Ray, I just remember his name).  It was a brilliant night and, after what seemed like *millions* of gallons of beer later, we 4 Americans barely staggered out, while Ray was hardly bothered.  Anyway, I digress.  In this video, part of a concert celebrating the life and music of Thin Lizzy frontman Phil Lynott, his old Irish countrymen Gary Moore, Eric Bell, and Brian Downey play an old Irish folksong the band made popular (forget Metallica) back in the early 70s.  Like all good Irish stories, this song involves whiskey, a treacherous woman, and a jail sentence.  The hero of this song relieves a certain Captain Faro of his gold, takes it to his lady, Molly, whereupon they proceed to enjoy the night.  Morning, however, reveals his error- he placed too much trust in Molly, who is has connived with Captain Faro and brought him to meet up with our hero.  Well, it comes to a sticky end, as the hero shoots Faro "with both barrels" (not sure if Phil was being cheeky with this as a double entendre or not) and winds up in prison with a "ball and chain."  Phil, a lovable rogue if ever there was one, passed away in 1986 from substance abuse, but he would have appreciated this beautiful version of the song.

wasn't even good . . . *trust* me."  She much prefers Chivas, a wonderful, top-shelf whiskey, to being with that old boyfriend.  The album version of this song is good, but there's such a playfulness in this live take, plus the fact that she pulls this off, live, without any difficulty, that I had to go with this.

There are loads and loads of songs about alcohol out there; this is just the tip of the iceberg (or a drop in a bottle!).  All this talk about drinks should have me reaching for the bottle myself, but . . . I made a promise to be sober, soooooo.  But, you all can lift a glass of Merlot, or Maker's Mark, or whatever your choice may be and for whatever reason.  Just keep Father Ozzy in mind and try not to damage yourselves.  Cheers!