Musical Mythbusting: The Origins Of The Pogo Dance 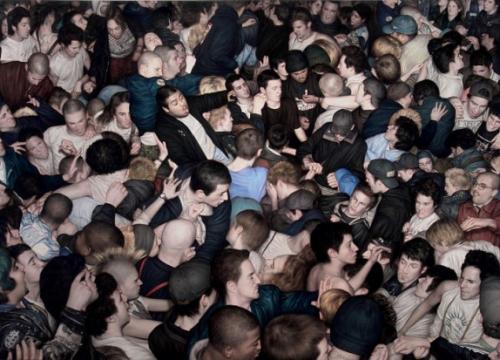 Ever notice that whenever some ancient artifact from the Stone Age gets unearthed in some archaeological dig, they always explain it as having some religious significance? It's always an idol, or part of a religious ritual, or an altar to make sacrifices, or something else in that vein. We get this picture over time that everybody from 4000 years ago spent all their time in church, to the neglect of tending crops, building houses, and raising children.

They'll do the same thing with all the artifacts from our own time. Archaeologists in the year 6000 will be pawing through our landfills going:

So it is with our understanding of the trappings of music subcultures. It will be really hilarious when they get to the punk rocker mohawk: "Hungry concert attendants used their hair to skewer marshmallows and hot dogs to roast over an open fire at outdoor concerts. They also served as a defensive weapon. Two punk males competing for the affection of a female would charge each other head-down, locking their spiked hairdos together in a struggle for dominance."

Take the famous pogo dance. We all know that early fans of punk rock (and sometimes new wave) would dance in place by hopping up and down like a pogo stick. What isn't clear, and is therefore subject to all kinds of fancy half-baked theories, is why they did this.

Gather round, children, and let's explain THE TRUTH ABOUT THE POGO DANCE as clearly as we can:

1. You have a new underground music style that's sweeping the world, OK?

2. But because it's still underground, it's not a big-ticket style where your band can fill a stadium. Hence, you are consigned to tiny bars and basements.

3. As a result, your have something like 300 fans packed into a space the size of a motel room. Are you all still with us? There's no room, you can barely move without bumping into the band.

4. In addition, your audience is very youthful (hence, very energetic), and your music style is raw, energetic, violent, thrashing, high-energy.

5. As a result, you're packed in like sardines shoulder to shoulder while being blasted with high-energy, aggressive music. You're pumped up and yet restricted at the same time. There's no room on any side of you, so the only way to move is up and down. It's that, or stand there like a row of cornstalks.

Now then, from there it's only logical that moshing derives from the pogo. Because as more punk rock fans began to take to the pogo, more incidents occurred where uncoordinated pogo-ers jumped askew and crashed into each other. But it was nothing personal, everybody treated it as an expected thing because you're all getting claustrophobia.

That's it, that's all there is to it. Go forth, armed with this new knowledge, and conquer urban legend. And for further music mythbusting, check out our post on False Music Cliches.