Pit Your Brains Against These Highbrow Artists 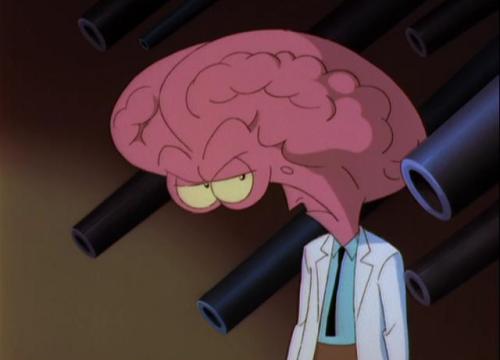 Ah, you are the discriminating individual, sitting there puffing on your meerschaum pipe and sipping your scotch, with your distinguished monocle and top hat - which looks silly with that sundress and those pink bunny slippers - but you're searching for more intellectual fare? Yes, brainy individual that you are, this paragraph couldn't send you scampering for the dictionary even if it undertook to surfeit you with a tsunami of sesquipedalian verbiage grandiose in its bombastic pomposity amidst its very pretentious fustian.

OK, we get it, you're a brain. Here's some brainy bands for a change:

First off, they do nothing but concept albums and rock operas, and at that, it's all fantasy and science fiction themes. Oh, and they also go heavy on the symbolism and metaphor in the lyrics. Lastly, they're Japanese, anime influenced, and their songs may be in any one of six different Eastern languages. That won't slow you down, right? Weep with awe at their beauty:

The last word in British progressive rock (and self-indulgence), Gentle Giant cheerfully admitted right on their album sleeves that they were out to push the boundaries of high-concept pop and didn't care beans if their albums didn't sell because of it. Cut from the same cloth as King Crimson, here's one of their more accessible pieces, "Quiet and Cold":

Frank Zappa, peace be upon him

Now, most of you don't think of the prophet Zappa, peace be upon him, as a highbrow - what with "Dancin' Fool" over there and "Don't Eat the Yellow Snow" over here. In fact, he could hold his own chops with just about any school of music you could think of, and covered most of it at some point of another. Bawdy lyrics, but instrumentals chock full of musical jokes, puns, homages, and references - and dauntingly difficult for all but the top musicians of his time to play. Here's "G-Spot Tornado," his composition, conducted by the prophet himself with the Ensemble Modern in Frankfurt, Germany:

For those of you back there thinking of this group when you were listening to Gentle Giant, this is the US version: Stage performers all, with violins and accordions, singing long-winded ballads about gypsies and pirates and sailors. They're a smash hit with the Ren Faire crowd. In case you haven't heard it to death already, here's "The Mariner's Revenge Song" right here in their living room:

Bonus Buck: Is your brain worn out for all this thinky-winky stuff? Tom-Tom Club's "Genius of Love," while having a title that would lead you to believe it's highbrow fare, is actually a relaxing bubblegum rhythm ditty from 1981 with an adorable animated video: