"Raiders of the Lost Ark" and the Saturday Afternoon Cinema 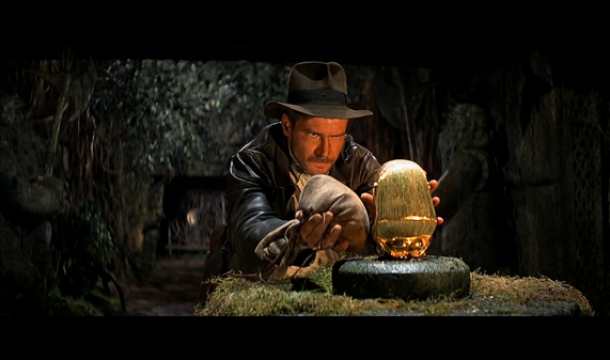 While we're waiting for the crowds to gather here at our shiny new movie blog, we stumbled upon this post over at Reddit.com. Somebody asks if 1981's Raiders of the Lost Ark is really all that great. The person recounts the experience of being an enthusiastic fan of the film, and (as all us film zealots are likely to do) dragging a friend to see it. Said friend (as is the typical result when we do this) was unimpressed, even so far as to call it "boring." That makes the person question their own tastes in the film.

Now, how anybody can describe Raiders as boring is beyond us. It's packed with fun. It's not meant to be deep. It's something fun to munch popcorn to. It has a sense of humor all the way through, doesn't take itself too seriously while also not undermining itself, and pulls off some iconic scenes which are instantly recognizable to everyone. I defy anyone to happen upon the scene where Indy is about to flinch that golden idol and simply leave the room before the big stone ball rolls on down.

But what caught our eye is the part where said friend of film buff had the impression that the snake pits and the vengeful spirits bursting out of the ancient relic were lifted from this film by the people who made the Harry Potter films. Over and over again, new generations are cursed with a lack of perspective when films do this. We see references and in-jokes that are lost without the context. We see whole scenes and think they were the original creation of the artist, only to discover later that they were referencing a far earlier work.

The Indiana Jones franchise is a homage, en grande, to Saturday afternoon serial movies of the 1930s-to-1950s. See, back then, most people didn't go to the movies until the evening hours, and the theater couldn't figure out how to fill those seats in the daytime. So they started showing serial films, which were shorter and played for about an hour each. They'd show for one week and then move on to the next chapter - remember, this was before the Internet, before most people had television in their homes even, so movie theaters were kind of a bigger deal then.

Anyway, they ended up being mostly for kids, since theater owners noticed that only kids had nothing else to do at 2PM Saturday. Great, then, let's market to the kids! And so was born the formulaic cliffhanger series. They were very much pulp fiction (no, not that Pulp Fiction), tales of heroes, adventure, cowboys, spacemen, and that sort of thing. Even if they aren't a widely known form now, they have a heavy influence on our modern-day culture. See if you recognize these names:

Yeah, all those characters were born in the era of Saturday afternoon matinee. You've heard the expression "Custer's Last Stand" a dozen times, but never knew that it was popularized in a 1936 short film of the same name.

Now how about some "Raiders" references? Because the word "raiders" pops up in a lot of titles from that era. There's Universal's 1941 Sea Raiders and Sky Raiders, 1944 Raiders of Ghost City, Columbia's 1945 Jungle Raiders, to name a few.

George Lucas in fact made Star Wars in exactly the same spirit: homages to Saturday afternoon serials. In the case of Star Wars, it was an obvious reference to the original Flash Gordon franchise. Indy is more an amalgam of everything from Raiders of Ghost City to Universal's 1945 Jungle Queen. But the biggest influence on Indy's character is probably Allan Quatermain. Quartermain is the character created by author H. Rider Haggard in a series of pulp fiction novels for young people published back in the 1880s. He's a member of the English gentry who prefers to spend his time big game hunting in darkest Africa, where he gets into various adventures including - in the novel King Solomon's Mines - searching for treasure in an ancient abandoned ruin, complete with booby traps and double-crosses from member of his own party.

It's a very different cultural context - the 1950s were a different time - but you'd have to be blind not to catch the resemblance.