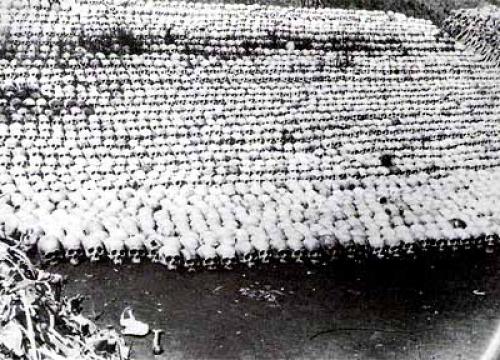 "Holiday in Cambodia" was the second single released by the Dead Kennedys and one of the most definitive Dead Kennedys' songs. While it barely charted at the time, it got included on their first album Fresh Fruit for Rotting Vegetables and is seen today as one of their signature songs. It also has enduring popularity: Foo Fighters covered it onstage at the 2007 MTV Music Awards, it's gotten cover versions by Atreyu since then, and it's been part of the soundtracks for the films Class(1979), Neighbors(1981), and Spider and Rose(1994), as well as recieving its due in the 2007 documentary film Punk's Not Dead.

It's a song that depends upon historic events for its context, so the point may whoosh over the heads of modern listeners. Let's see if we can clear things up...

First, the history: Khmer Rouge was the radical Communist party of Cambodia, who imposed a totalitarian regime on the country throughout the second half of the '70s, after winning a military coup - including a good old fashioned revolutionary assassination of previous general secretary Tou Samout. Led by Pol Pot and a group of his "brothers", they wrecked havoc on the country with a bloody dictatorship that shocked the world. Between one and two million citizens died under Khmer Rouge, either through execution, starvation, or disease.

The chilling part is the details and methods. If you've paid attention to recent American news and socio-political movements - Occupy Wall Street, "the 1%", hacktivism, Anonymous - you'll notice the similarities in ideology.

Khmer Rouge set out to create a classless society ruled by an iron fist. Money was abolished, books were burned, religion was outlawed, private enterprise was outlawed. Khmer Rouge rounded up and shot every intellectual in the country - doctors, teachers, librarians, professors, writers, artists, journalists, anybody with a white collar career. They were the ones Khmer Rouge called "elitists". Then they enslaved the entire rest of the population and forced them to work in farms. The farms didn't do too well, which beget a deadly cycle of starvation, soldiers blaming the problems on subversion, rounding up peasants to be shot for undermining the farming, more starvation, etc. People could be imprisoned, tortured, or shot (usually all three in that order) for having sex, communicating with a family member, or what the hell, even eating with anything but a spoon.

Hence the name of the event, "The Killing Fields". An excellent recap of the atrocities there, let's not dwell on it. On to the Dead Kennedys' song:

The song is a warning of the dangers of populist extremism, particularly applied with all ideology and no common sense. Pol Pot, named in the song, was an admirer of Chairman Mao of "Great Leap Forward" fame, and we all know how well that ended. Khmer Rouge stands today alongside the Chinese "Great Leap" disaster and the Soviet famine under Stalin as political disasters. Modern audiences might grin when the banks get blown up at the end of Fight Club, but forget just how grim the track record is for countries where revolutionaries try to truly reboot their system from scratch.

To quote the child of one victim of Khmer Rouge: "The Khmer Rouge legacy should not be neglected or overlooked because it was the past. It should be a monumental lesson for our future generation. Such an atrocity should never be allowed to reoccur. But it should never be forgotten."