Song Spotlight: You Are A Pirate 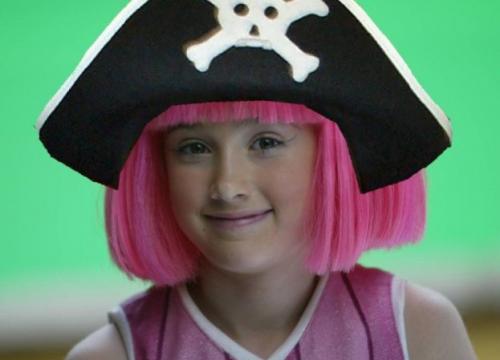 Pirates have captured the world's imagination for decades, but, like cowboys and Santa Claus and hackers, their popular depiction bears no resemblance to reality whatsoever. Never mind; "pirate" is now an archetype character as much as a zombie or a vampire is. It's a Halloween costume, signifying its complete absorption into Western pop culture.

It also has a new meaning, thanks to the Internet age. That meaning being the illegitimate acquisition of digital media for the purpose of mutual peer-to-peer trade. Like the classic definition, this is an international collaboration and hence very difficult for any individual government to reign in. Right about the time digital piracy got to be a "thing" in popular culture, the song "You Are A Pirate" came out. The video, at 1.5 million views on YouTube:

The song comes from the Iceland-based children's TV show LazyTown, which has gained worldwide popularity for its colorful characters, catchy songs, and overall appeal to all age groups. But aside from that, this song from the 12th episode of LazyTown, titled "Rottenbeard," came out in 2004, right when the rising popularity of digital file-sharing clashed with big-media industry's attempts to curtail it. The song accidentally became an anthem for digital pirates everywhere, even to the point of mashup videos including the name "LimeWire" (a peer-to-peer file-sharing site) just in case you'd miss the reference.

Fans of the show probably know that the series is written, directed, and produced by Magnus Scheving, but for this song, the name to know is the very Icelandic name of Mani Svavarsson, who composes these catchy tunes. Svavarsson (be careful not to break your lips pronouncing that) won Daytime Emmy award in 2007 for "Outstanding Achievement in Music Direction & Composition". The songs have had such stand-alone popularity that LazyTown soundtracks sell quite well on their own - the single version of the show's closing theme, "Bing Bang (Time to Dance)", even charted to #4 in the UK.

The lyrics are quite tricky. They sound strained and awkward on paper, but fit perfectly once you hear the music. A few terms to know:

And now, for the cover version by Alestorm, who bill themselves as a "pirate metal" band and we can't disagree:

Seek out a few other songs by Alestorm (oh, "Rum" for instance) and you'll have to agree that even for a novelty act, they have this pirate metal thing nailed.

While you're here, you also might like our article on Scrumpy and Western, which explains a lot about where our misconceptions about pirates (particularly the way they talk) comes from.