Songs About Birthdays and Aging 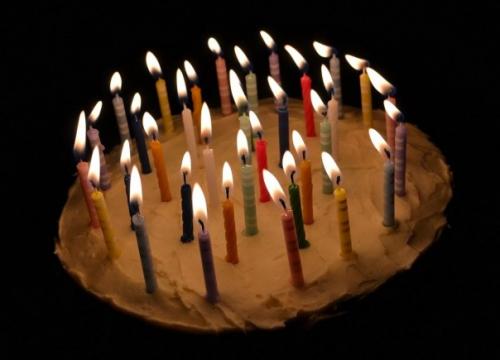 It's inevitable.  Unavoidable.  Unrelenting.  Every year it creeps up on you then . . . BAM!  (in dour, unexcited voice) "Happy birthday."  (sound of party favor horn being half-heartedly blown)  Yep, the birthday- the waypoint markers between a bawling, messy birth and a crummy, feeble death.  Cheery, right?  :)  Instead of "dust to dust," maybe the eulogy should read from "diaper to diaper?"    Hey, unless you're 20-something, reasonably fit, and unburdened by the madness of the REAL world, birthdays are just a reminder that you're getting old.  Older.  Oldest.  Or, you could be a perpetual child, like I am, and birthdays don't always get you down.  Oh sure, I'm not the spring chicken I once was, but why wallow in misery when there's still living to be done?  Birthdays are usually a party- complete with drinks, dancing, and . . . music!  Some songs are tailor-made for such celebrations.  Now, not all of these songs embrace aging with the same Peter Pan-esque cheery attitude.  Some are a bit of a downer.  But, that's life, right?

We start off with a trio of songs from the Beatles.  It's always good to start with the classics, right?  The upbeat, peppiness of "Birthday" makes this a natural selection and reinforces the celebratory air that should accompany birthdays.  This song finds the lads from Liverpool singing "They say it's your birthday . . . It's my birthday too, yeah!"  Who doesn't want to join in the birthday cake and the sharing of good vibes?  The second song is a bit more tongue in cheek, but finds Paul crooning about his (then) distant future, when he reaches the ripe old age of "64."  It's the downside of the male gender on display- "will you still love me, when I'm 64?"  Ah, aging and insecurities.  On a more somber note, the final song expresses the sometimes circuitous route life and love can take.  "The Long And Winding Road" was also written near the end of the Beatles as a group, perhaps reflecting the tensions at work in the band?  We must also place the Beatles and their songs in the proper context: in the 1960s, there was much more of a generational gap between young and old.  The new(ish) Rock-n-Roll which spoke to teens, did not sit well with the parents and there was much misunderstanding between the two groups.  Thus, Paul's use of the age of "64" as if it were a fictional world or something altogether foreign to the youth of the 60s needs to be understood in these terms.

"The Long and Winding Road"- The Beatles

The carefree nature of the Beatles' "Birthday" is echoed here in a song by early alternative rockers Concrete Blonde. Johnette Napolitano, the singer/bassist, frolics about the room in her PJs, ticking off a litany of things going wrong- "Outside in the hall there's a catfight.  It's just after midnight.  I guess I'll be alright."  She remains buoyant despite all the shenanigans going on around her.  It's her day and nothing is going to bring her, it seems!  Now there, that's the spirit!  One year older isn't all that bad, now is it?  Well, in the next song, Johnette talks about feeling "100 years old" and how "the years have not been kind to me, I know."  I dunno, she looks fantastic to me (at the time, early 90s)!  Why?  She just looks normal, natural and a comfortable woman in her early/mid 30s.  Nothing wrong with that and at least she's not a hyper-inflated Barbie doll.  I think, though, she's talking about the mental battles and psychic scarring that can drag anybody down.

"Heal It Up"- Concrete Blonde

With "I Think I'm Going Bald," we leave it to our brainy trio from Canada to add a bit of levity to a, ahem, sensitive subject, eh?  Ah, the lament of aging men: going grey, or worse yet, losing our hair!  The flowing locks, or lack thereof, form the center of this slightly cheeky song about that day you look in the mirror and it hits you- you're getting older.  In the song, this evokes memories of youth and times gone by, the responsibilities that come with getting older (family), and (speaking to the larger issues), giving up the dreams and ideals of youth for a job and "Wall Street shuffles."  For men, though, the title alone is enough to evoke shivers.  Sadly, we've heard a woman or two dismiss potential mates because they lack their original hair or teeth.  I say, turn that negative into a positive- tell them your bald spot is a solar panel for a sex machine!  Yeah, I don't think that will work, either.  The second song from Rush is even more bleak (apologies, I am trying to keep this upbeat).  "Losing It" details the point when you're not just getting older, but you've reach the downslope of life.  The song paints portraits of two individuals (a dancer and a writer) who were once very talented, perhaps among the best at their professions, but who now struggle in their old age.  I know, not exactly a happy thought, but perhaps this is a prompt for us to look at the elderly with more compassion and empathy?  It's also a call for us to age naturally and gracefully (take THAT, Rogain!) as the end is coming for us all; our choice is how we walk along the path to meet it.

In my youth, Bruce Springsteen was somehow elevated as the blue-collar voice of the generation.  Much of his message was misconstrued by the Right (see "Born in the U.S.A."), but he seemed a safe emblem for the working man.  Among the many things we do as we crawl through our mid-life is to think back to our youth and tell tall tales.  Our victories are magnified, our defeats seem to fade into the mists of time.  Springsteen astutely touched on that small-town, never-been-big sort of angst among boomers with his song "Glory Days."  This is all done in a friendly sort of way- a chance meeting with an old friend for drinks, a not-so-chance encounter with an old flame (more drinks!), and above all, the retelling of stories (myths?).  As The Boss reminds us, our Glory Days are passing by, we should grab ahold of them while we can and have a laugh or two.

Another boomer(ish) icon of music, Paul Simon, sang a sad song about aging and then coping with that in "Still Crazy After All These Years."  His is a slow, moody reverie about meeting old lovers, being set in his ways, and resisting the siren song of romance.  He sings: "And I aint no fool for love songs, that whisper in my ears" as much to bolster himself as to ward off the memories of lovers gone by.  These all too human thoughts and feelings he passes off as "crazy."  Then again, maybe he was just crazy.

"Still Crazy After All These Years"- Paul Simon

Let's try to end this piece on an up note, shall we?  One of the bands I really like, and so too does my son (no generation gap there, folks) is Paramore.  I wanted to include something from them because their music is upbeat and Hayley Williams is such fun to listen to.  On this song, we find our heroine in a post-22 funk, but instead of dwelling on the bad, she forcefully pushes on, wanting to be the catalyst of change and positivity in her world.  If my rough math is correct, this song came out after the Farro brothers left Paramore.  They then began a slagging campaign against their former bandmates, especially Williams.  Down?  Yes.  Out?  Not by a long shot.  This is the Gen Y roadmap for a more positive future, one could say.  Anyway, this a fun song and perfect way to wrap things up!  Happy birthday to you all and (echoing the words of Blue Oyster Cult) don't fear the Reaper!

"Tears At The Birthday Party"- Elvis Costello (with Burt Bacharach)

"Sunday (The Day Before My Birthday)"- Moby

"My Generation"- The Who

"As the Years Go Passing By"- Gary Moore

"These are the days of our lives" - Queen

ED note: Due to a scheduling mix-up, this is the post that should have gone up on 9/9.