The 50th Anniversary of Dr. Strangelove - What you didn't know 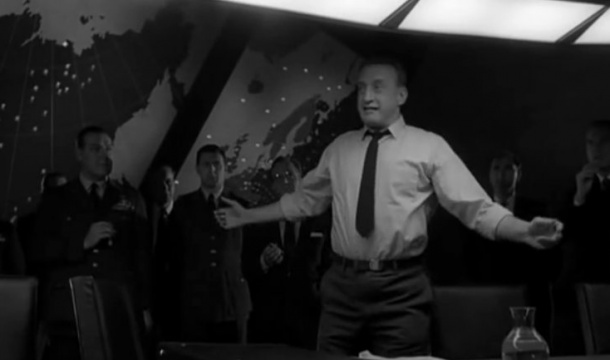 This month marks the 50th anniversary of one of cinema's most celebrated black comedy classics, Stanley Kubrick's Dr. Strangelove or: How I Learned to Stop Worrying and Love the Bomb. And while younger generations continue to discover and grow fond of this dark masterpiece, its historic contexts could use some explaining...

The movie release was delayed because of President Kennedy's assassination. Similar to how many 2001 films were held back or cut because of the World Trade Center attacks, the studio couldn't bring itself to put out a film involving a president as a central character so heavily so soon after Kennedy's assassination. Not only that, but a scene was cut from the film where everyone in the war room would have ended up in a big pie fight, complete with the character of the president getting hit with a pie and somebody commenting that he'd been "struck down in his prime." For another stunning coincidence, Major Kong's original line when reading out the packing list of survival contents was "A fella could have a pretty good weekend in Dallas with all that stuff!" The line was later changed.

The film was also conceived as a parody of the Cuban missile crisis. This event, the peak of the Cold War, was fresh in the minds of the public after only 2 years.

General Ripper's paranoid conspiracy theory about water fluoridation continues in real life. Wikipedia has a whole section on it, and you can doubtless find many more examples online.

The "War Room" set was designed by art director Ken Adam. You can see more of his work in several James Bond movies, including Dr. No, Goldfinger, and Moonraker.

George c. Scott was tricked into hamming it up. Notorious control freak director wanted Scott to play Turgidson as a war-crazed wacko, but Scott was reluctant to be so boisterous. So Kubrick told him to do a few over-the-top takes for "practice," then secretly filmed these takes and included those in the film. Scott later admitted that while this ruffled his feathers, he had grudging respect for Kubrick's vision. Not only that, but Slim Pickens in his role of Major Kong was unaware that the film was to be a comedy - his role was played better straight.

The sexual double-meanings are intentional. Including the names "Merkin Muffley" (a 'merkin' is a fake pubic hair wig), "General Turgidson" ('turgid' can describe an erection), "Jack D. Ripper" (named after the serial killer who mutilated women), Russian ambassador "DeSadesky" (named after famous historic pervert Marquis De Sade), the bomb going down ridden between Major Kong's legs towards the target at Laputa (a Spanish work meaning 'prostitute'), and the stock footage in the opening sequence of a mid-air plane refueling that looks like two planes having intercourse.

The characters of both General Ripper and General Turgidson draw from a real life US General. That would be one Edwin Walker, a noted John Birch-society member, who was criticized by both presidents Eisenhower and Kennedy for taking an independent political stance within the US military contrary to the prevailing government, before finally being forced to resign. Furthermore, President Muffley's character was based on UN ambassador Adlai Stevenson, whom Walker frequently antagonized.

The motto "Peace is our Profession" is the real-life motto of a British air force squadron. citation, better known by its Latin name "Pax Opus Nostrum."