The New Sounds of Strife 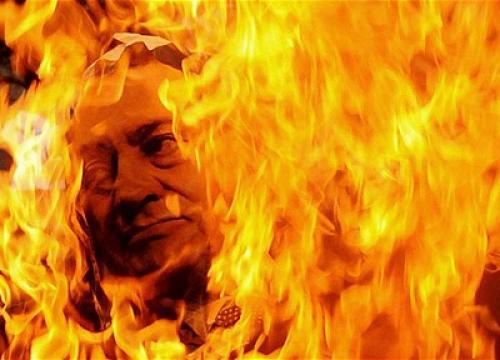 Over the last few weeks, the world has seen a string of revolts, rebellions, and even a revolution in the Middle East. What the end result of any of these conflicts will be is guesswork at best, but we thought it would be a good time to look at some Middle Eastern lyrical and musical themes.

Sure, we’ve all heard traditional Arabic music - indeed, we hear much of it in films, in news broadcasts, and all across popular culture. What is less publicized, however, is that the Arabic world also embraces the same musical undercurrents of anger and frustration as Western countries do - with metal, punk, and other varieties of aggressive sound.

Arguably the nation that has been in the news the most over the last few weeks is Egypt, and it’s no wonder why: a protest movement spanning many weeks, hundreds of thousands of people, and an ousted president, Egypt has been through a lot. While we’ve heard a lot of traditional Arabic music during the Egyptian revolution coverage on the cable news network, we probably haven’t heard much Egyptian death metal. Enter Scarab (video link: //www.youtube.com/watch?v=D_OfPIRxP6M&feature=related).

Lyrically, Scarab’s unique brand of death metal revolves around “spirituality, theories, and philosophies in how they perceive the world around them and how to survive and deal with the chaotic human nature.” (http://www.scarabegypt.com/) Musically? Brutal, fast, and grimy - if there is a better band to have provide the soundtrack to a revolution, I’m not sure that I’ve heard it.

Where death metal tends to have a polished, in-your-face sound and mentality, it can fall short when dealing with the more subtle blends of emotion. While Scarab fantastically emulates the anger felt by its members, the Bahraini band Narjahanam clings much more closely to a black metal ethos: sorrow, misery, and hate. A country undergoing something similar to what Egypt has emerged from, Bahrain could be on the brink of a revolution, and bands like Narjahanam express these concepts beautifully.

With lyrical themes revolving around “ancient Middle Eastern history, the bloodshed of wars, religions, cultures, the destruction of mankind and the end of the world,” it’s easy to see bands like Narjahanam as a rejection of the old order and a pursuit of something new, and of something different.

Although the Syrian revolution didn’t kick off as planned, that doesn’t mean that people aren’t angry - or that there aren’t bands expressing that anger. While the various forms of metal have picked up in the Arabic World in the last few years, Arabic punk is still a rarity - and Mazhott, hailing from Damascus, are carrying the flag (video link: //www.youtube.com/watch?v=pAwGp9R8O_k).

Mazhott build music around traditional punk themes as seen through the lens of the Damascus landscape: instead of shouting about Ronald Reagan and the system, Mazhott’s anger focuses on the difficulty of getting an education, “fathers forcing young daughters to marry older men,” and a generation that has been lost and doesn’t know where to turn. (http://taqwacore.wordpress.com/2009/12/03/diy-damascus-interview-with-syrian-punk-band-mazhott/)

Despite lacking even the most rudimentary of equipment, like guitar amps or even a regular place to practice, Mazhott has built a sound that would be at home in any NYC punk rock venue.

Due to a wide variety of US trade embargoes, incredibly harsh local laws that govern what can and cannot be said, and obscene penalties for all transgressions, countercultural music in the Arabic World is difficult to come by. While that is changing, the fact that these bands are often risking their lives to speak their mind and play their souls is something to be lauded - and rocked out to.