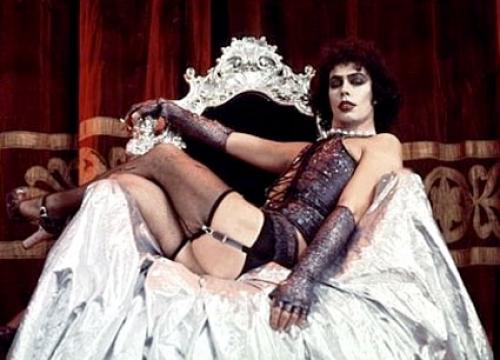 What is it about villains that make them so fun? Heroes have to be so Apollonian, so straight-edge, so boring. Villains get to be the ID run amok, indulging every hedonistic impulse. And when that's your role (and you might as well have fun, since you're gonna lose in the end anyway), you get to have the most rockin' songs. Nice guys finish last, and bad guys get the hottest dance numbers.

Rules for this list: Has to be in an actual fictional story, in a medium that, duh, allows music.

She's not even a villain - she's just a depraved kind of therapist who offers to help Tommy, after all. But when you put Tina Turner behind a song like this, you'll be begging for her to dominate you in her syringe-studded iron maiden too. We already raved about her once here.

Well, what can you say after you've said "Tim Curry"? The only thing that stops this from being higher on the list is that seriously, Dr. Frank-N-Furter isn't all that evil, and hence, not all that menacing. Twisted, perverted, and depraved, yes. Wants to rape you and make you like it, no matter your gender or orientation, yes. But just not the same kind of heavyweight that your typical villain is.

We're definitely talking about the 1986 one here. Levi Stubbs just chews up the whole show and runs away with it, giving us the most irresistibly hammy killer plant ever. You end up rooting for it anyway, just because it makes being wrong so fun that it has to be right.

#4 "Up There" Satan, South Park: Bigger, Longer and Uncut

How do you play the devil? All hissing and wicked and blah ha ha, right? Well, meet the '70s soul brother of devils, as Trey Parker comes out of left field in a brilliantly counter-intuitive sympathetic song that genuinely has you rooting for the poor bastard by the end of the song.

What steals this scene is the characterization. The sadly underrated Martha Wentworth turns in the most hysterical, daffy, eccentric performance ever, while playing an old-school witch. From the get-go, you do not doubt for a second that she's both scary powerful and completely unhinged. Insane villains, as a rule, don't generally climb to the scary side of the scale simply because, duh, insanity is a handicap. But Mim brings it all the way around by being so unpredictable that she's fifty kinds of loose cannon - and loving every minute of it.

#2 "You're a Mean One, Mr. Grinch" - Narrator, How the Grinch Stole Christmas

Ah, this was when they knew how to make Christmas specials! The immortal Thurl Ravenscroft pulls this off with his glorious iron-bellows baritone, glibly thundering line after line of Theodor Geisel's purple poetry. Notice how many pictures this song puts in your head? "Seasick crocodile", "bad banana with a greasy black peel", "garlic in your soul"? The rest of us can barely muster a few cuss words - wouldn't it be great to be able to tell somebody off this masterfully?

Disney has a long tradition of doing their villains big and hammy, and we can think of a lot of Disney villain songs that deserve a nod. But damn them anyway, because this is the one that can still give a grown adult the chills. It's got a combination that adds up to more than its parts: Voiced by the unearthly-talented Pat Carroll with lip-smacking relish, a genuinely slimy character, operatic score, and lyrics that are pure evil by the pound.

Notice that Ursula doesn't really lie outright - even being clear on the point that her deals can turn sour - but just paints the truth a jaundiced shade of biased. This villain could win any argument and trick you into any bargain, even while you know she's evil. She's just that slick. And so good, we had to put it at #1 even though it physically hurt to put ol' Thurl in second place.