Top 7 Songs You Only Hear In Chick Flicks 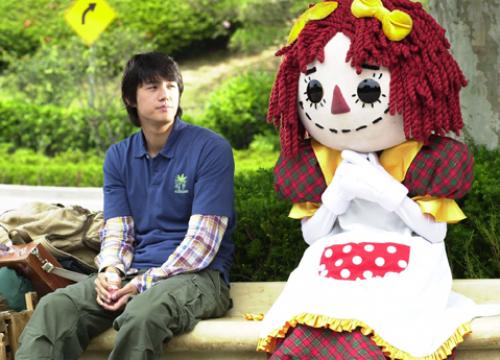 Imagine diving into a Hollywood-sized swimming pool - filled to the brim with pure estrogen! That's what listening to any of these songs is like. Ladies, if your guy suddenly becomes slightly less, um, passionate when the radio's on, check to see if one of these songs came on. Chances are he's associated the song with so many of the movies you make him watch with you, that just hearing it becomes Kryptonite for his masculinity.

Of course, this is quite a feminist anthem, and Aretha Franklin did a bang-up job belting it out. But then it gets degraded by being used in films where women become accessories to people like Hugh Grant. Hugh Grant's very name is so repulsive to the male gender that you can shout it out loud to scare off a mugger.

Time Of My Life

Notable in: Dirty Dancing, Going the Distance, Heartbreaker
Enjoy with: A Carnivale cruise

You couldn't make a song like this and not think you're going to get into every chick flick ever made in the future. It's like when Kiss made "Rock and Roll All Nite" and knew that every PG-rated film featuring a frat house party forever would be contractually required to play it.

Notable in: One Fine Day, Because I Said So, It's Complicated
Enjoy with: Monday morning coffee at the office

Ah, yes, the wisdom of mothers passed on from generation to generation. In real life, mothers say things like "I'm going to count to three!", "Not 'til you've finished your dinner, young man!", and "If all your friends jumped off a cliff, would you do it too?"

Notable in: One Fine Day (duh!), The Wedding Date, Flipped
Enjoy with: Your tear-soaked teddy bear

This song is kind of on the sulky side, even though it triumphantly declares that the man is going to love the woman for herself. Yes, but what if you're wrong? Because there has never been a woman who was dumped and did not hum this on her way back to the bench, and they can't all be right.

These Boots Are Made for Walking

Notable in: Now and Then, Delusion
Enjoy with: A plate of baby-back ribs and a Corona

This is almost as tough as a chick-flick song gets. Even though it has a sassy, why-don't-you-put-me-in-my-place vibe to it. On the one hand, it was also used in Full Metal Jacket. But it is featured in Now and Then, which is such an uber-chick-flick that it actually drains the testosterone out of Full Metal Jacket just by association.

Notable in: Now and Then, Waking Up in Reno, A Guy Thing
Enjoy with: A bottle of strawberry pop

Here's Now and Then again! This entire film is about girls riding bicycles and singing along to Brill Building oldies, so every song on it qualifies as the uber-chick-flick soundtrack. And who would guess that a song which is a romantic comedy would be used in romantic comedy films?

When a Man Loves a Woman

Notable in: When a Man Loves a Woman (duh!), Stella, The Rose, Valentine's Day
Enjoy with: Your period - nothing else is even female enough