What Makes A Punk Song Punk? 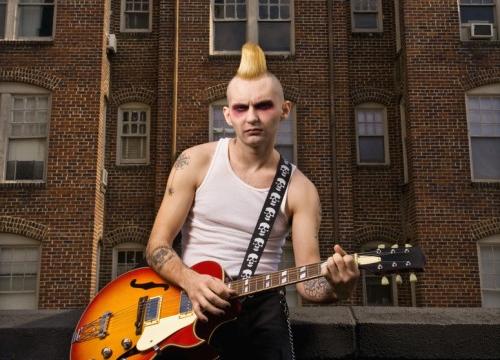 While vanilla punk rock is either dead or kept alive by a host of revival bands, there's still a thriving bunch of punk-crossover genres. We've covered some of the remarkable odd-ball categories in our post on Do We Really Need All These Punk Genres?

But it's also debatable what makes a punk song punk. It's more of a style than a genre in its own right - just like you can play the reggae or polka version of any song, you can take any song and "punk it up" at least in musical style. But punk, itself, has some stylistic markers all its own:

There are no punk songs about finishing your homework, paying your taxes, graduating college, wearing a suit and tie, starting a family, saving for retirement, and living in a home in the suburbs with a white-picket fence around it. (Not counting "straight edge", which is an exception that proves the rule, being punk about punk.) It's all about blowing apart that establishment, pushing back against the military-industrial complex, shouting down all of the mainstream attitudes. To be punk is to swim against the tide. Even when the tide is punk, punk will just turn hipster and rebel against itself.

Similarly, just as country-and-western is largely the domain of the right-wing, punk is squarely in the left-wing. Simply piles of punk songs are protest songs, punk rockers themselves being a very politically aware niche. Just sitting through a Dead Kennedys album feels like attending a sermon. You name the hallmark of conservative thinking, and there's a punk song viciously tearing it apart. In this way, punk became the new folk.

A sense of humor

This is an aspect that everyone seems to forget. Very, very little of punk music takes itself seriously - it throws in jokes, puns, satire, bizarre music styles, and off-beat experimentation. Even in the names of punk bands, you find that they pick a name that's deliberately off-putting. It's impossible to be self-righteous and dignified while calling yourself "The Germs", "The Weirdos", or "The Sex Pistols". Most of the humor is satire, directed at culture and current events.

Punk bands and punk-crossover bands seem to be in an informal contest to prove who can be the most outraged and depressed. There's also a cheerful dash of hedonism - sex, drugs, and rock-n-roll, rather than a celebration, is acknowledged as an escape, a sedative to dull the pain of existence. Most punk songs have an attitude that says "the world is coming to an and, and not a moment too soon!"

You might think of it as "stylistic suck". Punk music started out foremost as a rebellion against the music industry itself. Who needs those over-produced studio albums? We'll do it in our garage! We only know three chords, and we don't care. Furthermore, we'll do it onstage with crazy hair, ripped-up clothes, and paint-splattered, beat-up instruments. The idea is to make it sound primal and savage, with a stripped-down sound that doesn't get in the way of the message.

There, that's our little pocket guide. But be warned, there are almost as many ways to interpret the genre as there are songs in it. Check the comments for other suggestions as to what defines the genre.