Who Is This Santa Claus Guy Anyway? 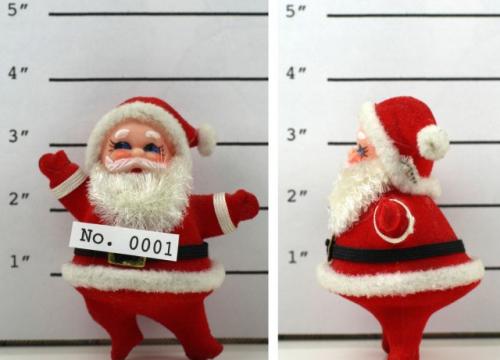 If you've been shopping at the mall lately, doubtless you've been bombarded by the usual barrage of Christmas songs, some of them a little too loud and a little too pushy with how jolly they are. Quite a few of them revolve around Santa Claus: "Santa Claus Is Coming to Town", "Rudolph the Red-Nosed Reindeer", "I Saw Mommy Kissing Santa Claus", "Here Comes Santa Claus", and "Santa Baby", just for starters. Santa is probably one of the most popular mythical figures in music.

Well, just who is this big lug, anyway? Most likely, you thought this article was going to be about this bishop in the country of Turkey name of Nicholas who gave a bag of money to three sisters so they could get married, and so he became "Saint Nick", and so on and so on. If so, we here at Lyric Interpretations would like to warn you now: strap on a helmet so you don't make a mess when we blow your mind!

Forget "Saint Nick". Santa Clause is, in fact, more Thor than anything else. Yes, you know the Marvel Comics character who recently got his own film in 2011? We don't mean the Canadian heavy metal band, nor the album by Wizard. We mean the Norse god, the flying guy with the big hammer. Keep reading, because we have a lot of explaining to do:

In Norse mythology, Thor was the son of the god Odin. Thor is associated with thunder, lightning, strength, oak trees (because they're strong), and protection from the forces of darkness and the occasional frost giant. In fact, he was known by many names (just as the Christian God is also called Jehovah and Yahweh); Thor also answers to "Punzar" (which literally translates to 'thunder'), "Jupiter" if he's in Germany, "Donar" in West Germany, Porr in the Norse, and in Old English as Punor.

Now, let's pause for a minute here. You should know that there's an odd relation between Christian holidays and Pagan holidays. Just about every religious holiday in the United States has a one-to-one mapping with old European Pagan holidays. That's because middle-ages Christians set out to spread Christianity, but had a hard time turning Pagans away from the fun holidays they celebrated. Particularly in the case of the children. Can you imagine telling your kids "Sorry, we're converting to Buddhism, so no Christmas this year!" You couldn't do that - you'd have to spin it like this: "Um... The tree now represents Buddha, the presents under it are Nirvana, the decorative lights represent the light of Satori, and December 25th was also the Bodhisattva's day of reincarnation." The kids shrug and go: "We still get presents and two weeks off from school?" Yeah, of course. "Cool with me then."

That's exactly what happened with Christian holidays and Paganism. That's why we have bunnies and eggs on Easter (used to mean a Pagan celebration of the rebirth of nature, now means resurrection of Christ), spooks on Halloween (used to mean going into the Pagan 'dark half' of the year on Samhain, now means evil haunting the world before All Saints save us on the morning of November 1st), and trees and lights on Christmas (used to be the Pagan Yule log and the lights / fires are to drive away darkness on the longest night of the year).

And that's what happened with a lot of Christian figures as well. Mythology has a way of staying embedded in our culture right under our nose without our realizing it, such as the days of the week being named after various old world gods. Hey, you know why Sunday is "the Lord's day"? It used to be "sun's day" for Pagan sun worship. Great, everybody still gets the day off!

OK, but wait a minute, how do we get from a stern Norse guy who talks funny, battles ice giants, and swings a hammer around, to a fat, jolly guy in a red suit who brings presents? Follow the time-line: Thor had red hair and beard, like many Germans, and received his first re-translation in Wagner's opera "Der Ring des Nibelungen" under the name of "Donner" and brother-in-law to Wotan (king of the gods). Thor wore white, but about here, Christians came along and retreaded Thor as "Saint Nicholas" with all their bishops-and-dowry nonsense, and that changed the coat to bishop's frock red. Next, author Washington Irving (also the author of Ichabod Crane and Rip Van Winkle) popularized Christmas in America by writing of the Yuletide celebrations of Bracebridge Hall in England. The inevitable cross-cultural bridge was constructed for Santa Claus to travel. Next, Clement Clarke Moore wrote "The Night Before Christmas", and boy howdy, did he ever take liberties with the European Saint Nick! He changed Saint Nicholas' hair from red to white, changed the sleigh-pullers from goats to deer, and made him fat and jolly instead of stern and muscular, all in the name of making him more appealing to American audiences. The Coca-Cola commercial came along... and that brings us right about here.

Ready for the last mind-blower? Original, classic Thor rode a cart through the sky pulled by a couple of flying goats. Now, think of the poem The Night Before Christmas. Think about the reindeer's names. Meditate on them for a minute. You know how Thor is the god of thunder and lightning? Find your nearest German-speaker and ask them the German words for "thunder" and "lightning".