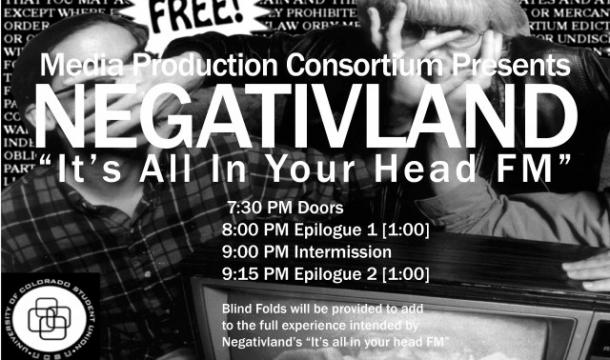 You've never heard of Negativland, and you'll be well into this post before you understand why we're even covering them on a music blog, when they were hardly even musicians (at least when they started out). Yet so much of what they did is relative to the modern concepts of punk rock, music sampling, Fair Use copyright debates, digital freedom, and Occupy Wall Street that there ought to be shrines to them anywhere where these interests congregate.

In the first place, they invented the concept of "culture jamming." No, really, check the Wikipedia page on culture jamming, and there they are: "The term was coined in 1984 by the sound collage band Negativland, with the release of their album JamCon '84." Ah, note the Wikipedia category sidebar on that page: "Anarchy." You know, as in Sex Pistols' "Anarchy in the UK," did somebody say 'punk'? See, punk rock also started as a rebellion, and when it got political, it picked the evils of capitalism and consumerism as its opening target. Which is just what culture-jamming does.

Now for a look at the spirit of Negativland's work, here's one excellent piece, an early film of there's called "No Other Possibility":

Now that that hour of madness has broken your mind, let's explain what just happened. That is a media piece that combines parody, documentary, avant-garde theater, and sound collage - plus a kitchen sink or three - to make a statement about our times and our relation to the media within the context of consumerism. It would have tickled Andy Warhol purple and fascinated Marshall McLuhan. It's also no accident that Robert Anton Wilson is often mentioned in the same blogs as Negativland.

Do we even have to explain that this group came out of San Francisco? You can see a smidgen of a famous 'Frisco landmark on the cover art for their 1987 album "Escape From Noise," which we'll dump out right here for you now:

Did you survive that? How about that sample of actor Jim Backus as Mr. Magoo towards the end of that first track, was that brilliant or what? And the long name-drop of just about every relevant musician at the time this was made? Oh, did we mention that copies of this album came with a bumper sticker which read "CAR BOMB"? How about (Internet atheists, listen up!) the song track "Christianity Is Stupid," which the band gleefully used to focus controversy when they later claimed the song to be responsible for the David Brom murders? Oh, and that "Nesbitt's Lime Soda Song," how folky was that? And Jello Biafra's toilet flushing at the end of "The Playboy Channel," how cool was that?

What other anti-consumerist, anarchist culture connections are there here? Pick an aspect, any aspect. Their record label, Seeland Records, was indeed named after the micro-nation of Sealand, the most punk nation in the world. Another label they released under was SST, better known as the home record label for punk acts like Black Flag. Oh, they're also members of the Church of the Subgenius, the most punk religion in the world. And of course, Negativland's continuous "subvertizing" - where you take advertising media and twist it to its opposite ends - is also the central point of groups like Adbusters. You might have heard of them. They started Occupy Wall Street!

We'll leave you with a couple last pieces to shake you up, a pure instrumental work "Perfect Little Cookies" from their most recent album, 2008's " Thigmotactic", and a fan-made video to go with their audio piece "Guns":

Yes, "thigmotactic" is a real word. You're supposed to Google it now. You know, we all use the word "Google" as a verb now. Ever notice that? A corporation has the power to shape the thoughts in your head, the language that you speak. The same corporation that lead you here, because how else did you find this blog? Now go be a good little consumer and buy something from one of our advertisers. That's the whole reason this blog exists, you know, is just to make money. That's your purpose in life as a consumer. You move money. You're a money conductor.