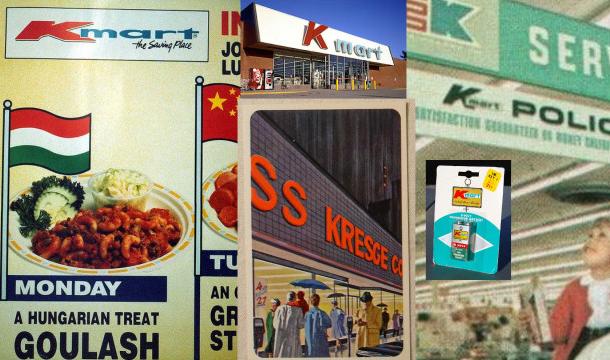 Get ready to let some daylight into your eyeballs, my Chrsitmas cosmic blueberries, because this story I'm about to tell you will streak across your radar like a vision of Santa's sleigh on NORAD.

Close your eyes and recall your earliest childhood memories of Christmas, and chances are you'll think of the department store music playing across decorated aisles at… well, KMart, of course, because we're talking about 20th-century times. Substitute your local Sears, J.C. Penney, Woolworth's, or generic mall anchor as appropriate, before these retail hulks were boarded up and abandoned. But we'll focus on KMart, home of the blue light special, because of the connection with this distinguished gentlemen of 20th-century Boomer business: S. S. Kresge. 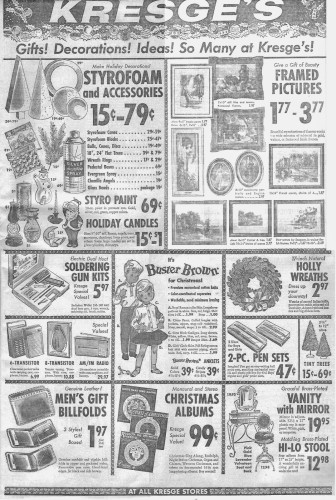 S.S. Kresge is the man lending his monogram to the "K" in the recently-demised retail chain "KMart," renamed from earlier forms as "S.S. Kresge Company" (1912) and "Kresge-Newark" (1923). Not only is there a city named after his family, but Kresge was also billed as a member of the "four Masonic lodges and the Ancient Arabic Order of the Nobles of the Mystic Shrine, YMCA, the Detroit Athletic, Boat, and Golf Clubs, Rotary, and various commercial and automobiling societies." How's that for well-connected? Kresge passed away at age 99 in 1966, having secured his seminal retail empire and, doubtless, enjoying the ring of heavenly cash registers to this day. 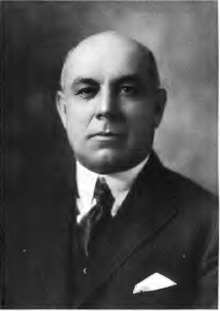 The Works of S.S. Kresge

Start with the Internet Archive's (have you donated today?) cache of KMart in-store music, titled "Attention KMart Shoppers!" This legendary 2015 find among archivists was the work of Mark Davis, former employee, who went to the trouble of preserving original cassette media of in-store "Muzak," the bland, boring style playing over many a sleepy afternoon shopper.

So far, so self-explanatory. But a scroll on the ol' tape archive starts turning up both record albums and video slideshows or in-store employee training. All of it credited thusly: 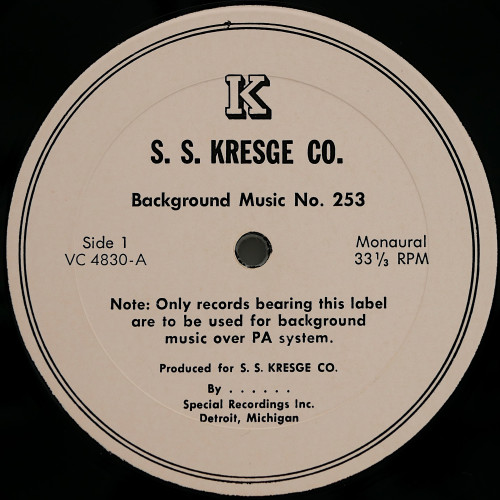 Ah yes, Background Music Record No. 253, the refreshing sound of bottled late-20th Consumer hivemind! From the opening (frankly, a little creepy) slowed-down music-box effect of "Edelweiss" to the hearty, festive banjo and accordion of David Rose and his Orchestra, this music was playing on 2,400 stores across the USA - right at the crest of the retail boom, before the 21st century recessions started the "retail apocalypse." There are dozens of these albums there.

But there is much more to this picture. Credited as the producer "for S.S. Kresge CO." is "Special Recordings, Inc., Detroit, Michigan." Huh. The labeling couldn't be more industrial were it spray-painted upon a barrel of crude oil. History's Dumpster (love that title!) has a mention, but our research trail runs thin thereafter.

So we have next to no idea what musicians were credited separately, under the anonymous house brand. We certainly recognize some recordings as credited to Lawrence Welk, but we'd wager he was too busy with his champagne-bubble-strewn TV show to drop by Special Recordings. What anonymous musicians were in these orchestras? Is there a heart for every broken bulb in a retail shopping center sign?

Who Worked For Special Recordings? Where Are They Today?

The "Detroit, Michigan" location for such an anonymously-named company might as well be a ghost by now. Such is the fate of much corporate "Nothing Music," to coin a phrase from YouTube star Tantacrul.

We presume that many of the orchestra leaders credited on KMart recordings, including the Dallas Symphony, Marty Gold, Percy Faith, Peter Nero et. al., were variously studio session musicians working for "Special Recordings Inc." We'll also figure that this company, given that it seems to have produced exclusively at S.S. Kresge's bidding, was a subsidiary of his holdings. Before we get back to him, we haven't talked about the training videos:

"Shade Talk" - Witness the charming 1950s aesthetics of this little soap opera. Here we have additional credits to this production, also on the Archive, if you hunt through the images: 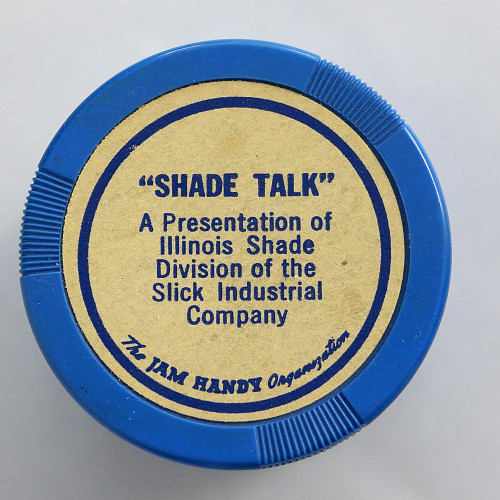 Printed on a custom poker chip, no less, doubtless preserved from a convention (perhaps even employee training retreat) that met in Las Vegas or perhaps Laughlin & Reno. As we can see, plummeting down the credits rabbit hole will only net us an endless stack of tiny sub-corporations, like a cobweb in the corner of an abandoned mall. But these videos are true vintage kitsch masochism in brewed, distilled form. Brcae yourself for...

Katy! Katy is the model S.S. Kresge employee training mascot! Look at her sexy bandleader's outfit (carefully coordinated in Scots-print) and rousing leitmotif! You want to be Katy. You pledge your life to seek the path of true Katy. Katy, Katy, Katy! Mr. Kresge prefers Katys. Kneal and worship at the altar of KATY!!!

Don't let Katy fool you, her arm-pumping sing-a-long is the opening for the most yawn-inducing 20 minutes of customer service management training in the history of Midwestern commerce. By the end of this video, you hate this Katy goodie-two-shoes and wish her a fiery death in the Black Friday cauldron of Mammon. But I digress.

It's hard not to be charmed by this much production effort. The visuals, at least, are stunningly rendered, though bland, vintage graphic art. And lest we judge all S.S. Kresge + Special Recordings output by the teeth-grating Katy, there's this masterpiece of audio drama:

The Diary of Lady Luck

She almost makes up for Katy, a thoughtful and identifiable character penning her diary. What a delightful flight of fancy! Contrast the utterly bland Kresge Section care "You're in Show Business," because that's about the full range of Special Recordings' efforts. Treasure what crumbs of joy among this flotsam ye may.

The background music to these audio productions does occasionally snag the attention, but alas, we will lose touch with these industrious talents, doubtless moving on to better paychecks if not careers. All we can do is bask in the glory of the fading economic Babylon.

Or perhaps just us next time for part II of our weekend holiday special here at LyricInterpretations, featuring Archive Musical Rabbit-Holes! 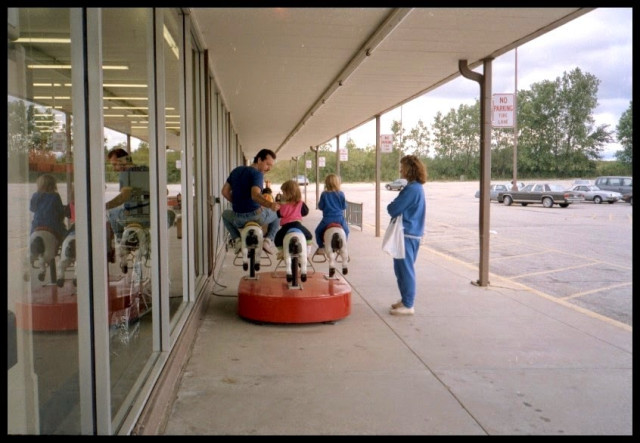