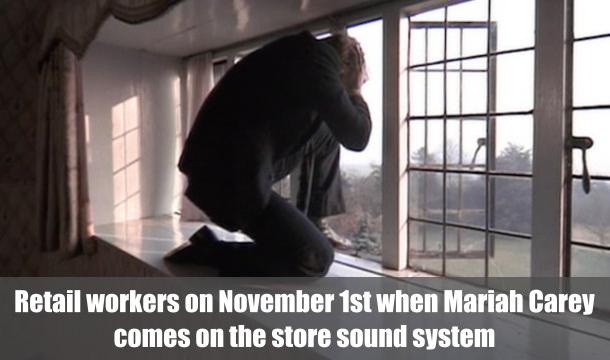 Hey Borgs and gorillas, it's November 2nd, and you know what that means? That means (and memes) that you can't get enough of this song:

Or maybe, to hear the Internet tell it, this song has the same effect on you that it had on Malcolm McDowell in Clockwork Orange. Like listening to it is such torture that you'd rather jump out a second story window.

And Mariah Carey is probably downstairs all: 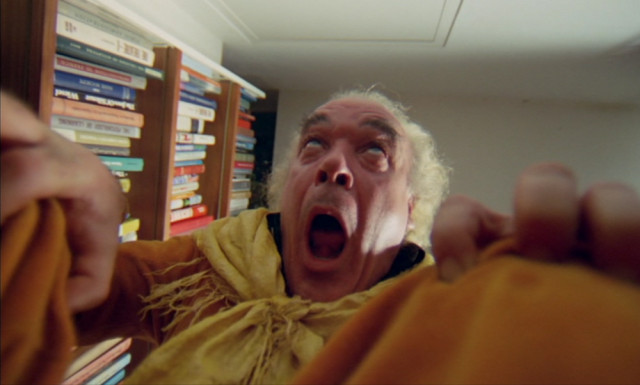 What is it about Mariah Carey and Christmas anyway?

Personally, none of us have much against Mariah Carey herself. She is a very talented performer, with many a popular hit out there. Your humble blogging drone is the biggest grouchy Grinch in the world, and even I have to admit that the above video is well-produced and nails the holiday spirit.

Mariah Carey's 1994 hit "All I Want For Christmas Is You" would be nice to listen to during the week of, say, December 22nd to the 28th, and then it's time to think about New Years. On rotation with other songs, of course. You know. OTHER SONGS.

Wait a minute, don't come at me. Quit pointing that sharpened candy cane at my throat. I can see you're upset. Let's discuss why.

Let me put it this way: You will get sick of anything, no matter how much you love it, if it's forced on you day and night. Say you love chocolate cake, right? Well what if soldiers marched to your door every morning at 6 AM and held you down screaming to ram every orifice full of chocolate cake with a piledriver? Every day, rain or shine, no escape? Take my word for it: Not long after having endured said ordeal, you would experience some pretty negative feelings about the situation, some of which would inevitably spill over onto the matter of chocolate cake itself.

If you hate store and radio music in general, chances are that you're just burned out over the repetitious replay of the same tiny selection of songs. All the stations do it; everybody complains, but the stations keep doing it. Bottom line: licensing a song costs royalty money, and songs need to be popular so sponsors will be satisfied that somebody will still be listening when an ad comes on. You can't take risks on a niche song only a few people will like at that rate. So the combined financial forces create a list drilled down to songs that have the most profitable value per second of airtime.

Now take that same effect, and narrow it down to Christmas music, that narrowest of genres.

It's not like they don't make other Christmas music

Mariah Carey's Christmas song is just the jingle which they jangle too often currently. What did they play before 1994? Oh, songs like Bing Crosby's "White Christmas":

Just ask anybody Generation X (that's me!) or older. They got just as sick of Bing as you do of Mariah. If it wasn't Bing, it was "Little Drummer Boy":

I mean, in the first place, it sounds like an abbey full of nuns singing at a funeral. Next, literally every chorus is "bah rump a bump bum." A phrase which, as written, makes its own gravy with all the obvious ribald parody possibilities, but repeated over and over makes you want to take the drumsticks to the drummer boy's head.

This shows a problem with Christmas music: It is a religious holiday, so lots of the songs are meant to be played in church and the rest are under obligation to show a religious degree of respect. But at the same time, not everybody listening is necessarily a devotee of just that branch of religion.

Before anybody comes at me about spoilsport Atheists, lots more religions besides American Evangelical Protestant Christianity believe in Jesus. That includes Islam. They just don't feel the necessity to pipe baby Jesus's diaper rash into every store speaker for 61 days every year.

So: You have to balance this out. Besides, many really religious hymns about Christmas are slow-paced, choirboy-chorus affairs, which clash with the Black Friday shopping atmosphere. You'll never run down the aisle with your shopping cart to the cash register at the languid pace of "Angels We Have Heard On High." You need an R&B beat, something to shake your booty to.

But still, plenty of contemporary Christmas songs have been made. God knows, every music artist seems to have their own Christmas album. At least half of them have covered "Rockin' Around the Christmas Tree."

Why can't we play that one to death every year? Oops, we did, back in the '80s, and everybody got sick of that one too. 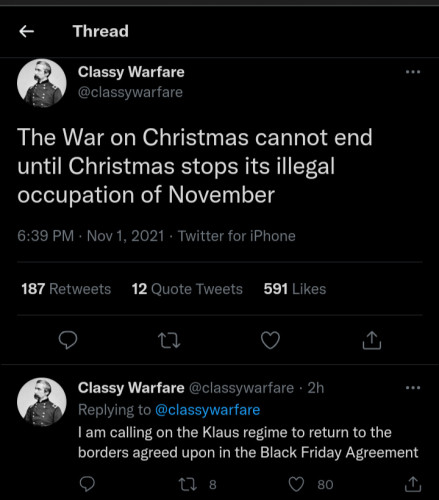 All of the above makes us ask:

Why should one holiday get its own genre anyway?

Honestly, plain old regular upbeat music works fine for Christmas too. Hey, look at Thanksgiving. What songs does it get? Who wants to hear a song about turkey? Are there Thanksgiving songs?

Oh. Oh my God. Wake me up in January.