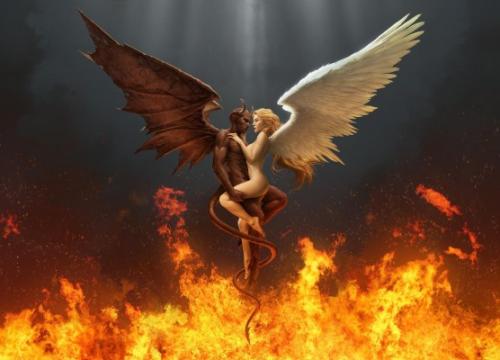 Alright, nerds, put away your D&D dice and your Magic cards, it's time to get serious.  Today, we'll discuss the important topic of . . . Angels, Devils, and Demons in rock music.  I know, *serious* stuff, right?  Ok, sarcasm off, it does seem that the use of the words (or embodiment) of Angel, Devil, and Demon show up quite a bit in, ahem, certain genre of music (looks at the long-haired, grubby metal dudes in the corner).  This iconography can be taken quite literally, in a good vs. evil religious context (Angels- flowing white robes, wings, halos, etc., Devils/Demons- cloven hooves, pointy tails, dark or red, horns, etc.), but the terms can also be used much more figuratively and whimsically.  For instance, pop singers have called the object of their desire "Angel" (usually denoting a female, but not always), or, if jilted, they might refer to them as "Devils."  I'll touch on a few of the ways music has co-opted these terms for their own use and what cultural significance they impart.

As integral to Western culture as religion is/was, it's no surprise that it winds up in our pop culture.  The images and artifacts of the personification of "good" and "evil" are reflective of our own, ingrained religiosity; whether we are believers or not.  Say the word "angel" and invariably we think of something good or benevolent.  Conversely, say "devil" and the wrinkled nose or furrowed brow denote negative connotations and an automatic dour response.  Creative license being what it is, music is able to take those binary representations- angel vs. devil, good vs. evil- and use them as they stand, or shape them into something new and different, even less threatening or less goody-goody.    The middle ground is the fallen angel or sympathetic devil- both good and bad.  Or, musicians could do a complete role reversal- a very bad, deadly angel (think of a Weeping Angel from Dr. Who- don't blink!), or perhaps a sexy, loving' lil devil.  Where to start?  Let's start with those bands/musicians we would expect to play on the good vs. evil themes, then move further afield as we go.

Black Sabbath, Priest were pioneers in heavy metal and also established the use of religion/the demonic as a theme in Heavy Metal.  Yeah, with band names like that, you can just count on their inclusion in this blog entry.  However, the first song, "Angel," evokes the image of an angel as compassionate and personal.  The lyrics ask for the "angel" to return, to offer succor, to "put sad wings around me now" (a reference to their early album, Sad Wings of Destiny, which places a fallen angel in Hell), and to "Hold me inside your wings and stay."  It's a softer side of Judas Priest, to say the least, even though the image seen in the video is their interpretation of what an “angel” is- metallic, with sharp, razor edges, and on menacing.  With "Devil's Child," Priest sticks to the devil = bad script.  This could, however, simply fall into the relationship gone bad trope and this devil's progeny is merely human, but oh so evil.  Rob sings of "her"- "Oh no, you're so damn wicked, you got me by the throat . . . Oh no, gotcha claws stuck in me, you never let me go!"  Sounds bad.  Essentially, these are relationship songs, but with a veneer of religious symbolism.  Other songs from Judas Priest that draw on the angel/devil/demon themes- "Deal With The Devil," "Green Manalishi," and "Demonizer," among others.

Iron Maiden.  There's a whole lot of devils and angels to choose from in the music of Iron Maiden, but instead of going for the expected (666- Number of the Beast), or the inane (Angel and the Gambler), I'll go with a more . . . grey treatment of this topic.  Here an angel is corrupted in the continuing struggle between Heaven and Hell, with some notion of an earthly "Chosen One" involved as well.  The band works over familiar ground- Armageddon, the end times, etc- while wrapping the "hero" up in the mantel of a savior figure- someone who has a very important role to play when the time comes.  Is he really that important, or merely a pawn?  Well, despite the incorrect perception that the boys in Maiden are all baby-eating Satanists (absolutely NOT true), the overall vibe of this song, and others from them, is positive and (generally) good, in nature.

INXS sang about "every single one of us, the Devil inside," Gary Moore wailed on "Devil In Her Heart."  And, it being political season here in the U.S., we should heed the words of Anthrax and go with "The Devil That You Know"- not a great choice, but . . ..  While those very religiously disposed believe in a real Devil and real Angels (or God), I think we personify the good or evil that resides within us, or in others if we want to denigrate/elevate them.  It comes out in all sorts of ways in music, too.

previous blog (sailing/sailors), I touched on the notion of travel over a body of water as an expression of escape, or change, or a transformation to something new.  The motif of travel can be combined with the personification of those up above and down below.  Perhaps that's a nod toward Hell's Angels, the notorious biker gang?  The Rolling Stones would do well to re-think having "Sympathy for the Devil" for these monsters of Altamont.  Keeping with the motorcycle/devil combo, there's Bruce Dickinson's "Devil on a Hog," a story where the devil gets to tell his tale, though somewhat arrogantly.  "Leave my rivals in the dirt, I've seen your world and I got the shirt," Bruce sings of this cheeky horned monster.  In an earlier band, this time Samson, he gives a ride to the other side of the proverbial coin in "Riding with the Angels."  At least he's fair.  Perhaps the ultimate song of hanging with the henchmen of good and evil goes to Van Halen with "Running With The Devil."  In this instances, travel, as a motif, isn't so much transformative, but rather, liberating.  A chance to break away from the norm, do something you wouldn't ordinarily do.

Finally, and in that vein, what happens when musicians flip the script, and turn a negative into a positive, and vice versa?  Way back in the day, The Cult sang "C'mon Lil' Devil, be my little Angel" (appropriately, in the song "Lil Devil").  This speaks more man's fixation with bad girls and women who can be both naughty and nice more than anything metaphysical.  I think Ian Astbury's leather trousers would be your tipoff here that he was merely being salacious, not spiritual.  Conversely, other artists may decide that angels have been given too much leniency and what if, when all is said and done, they fail us?  One of my fav bands from Finland, Machine Men (no longer active, sadly), posited that perhaps "there's no angels, to save us . . . the world is unfair, and there is no one who cares" in the song "Betrayed By Angels."  I think I'd rather deal with the succubus and the possibility of losing my soul rather than being stabbed in the back by an Angel.

Scorpions want heaven to "Send Me An Angel," and Gary Moore states that "If The Devil Made Whisky, he surely made my woman too."  Good, bad, evil, or divine, music has mined the themes with a variety that probably borders on the blasphemous.  Oh well, it's all just rock-n-roll, nothing to start a riot over, right? TheFourthStoog1.  I don't have much to say or follow many people, but perhaps in the future I will.