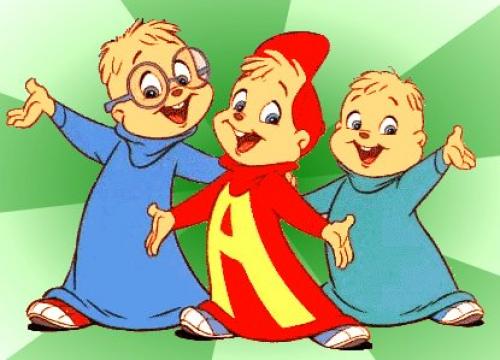 Last time in the land of fictional cartoon bands, we covered The Archies and all their spin-offs. This time we'd like to explore some unrelated bands from the cartoon and comic world. So grab your Jolly Ranchers and join us for this strum down Saturday morning cartoon land...

Note that we're not going to include every time a real-life band appeared in cartoon form - that would take a book. These are fictional cartoon bands. We also aren't including every time a regular animated series had a character launch a music career for just one episode or sing a song as part of a musical presentation in just one scene - just the Simpsons and South Park episodes alone would fill a book. We mean fictional animated characters that were portrayed as having their own band / music-career and performed at least one song per episode on average.

God tier: These acts rise above the rest by virtue of being their own original trendsetters.

Alvin and the Chipmunks

The whole "speed up a voice by playing it faster" thing was a special effect practically born with the first record player, and had a long history with novelty songs before Alvin was ever heard from. But these are the most successful of this genre. The cartoon series ran from 1983 to 1990 and spawned a few films and TV specials, along with a whole franchise.

Bet you'd forgotten about her, didn't you? This flapper-era acetone diva wooed movie theater audiences with her pouty charm, brought to life by the legendary Fleischer brothers Dave and Max. Betty Boop was practically the first recognized cartoon character ever, starting in the 1930s and staying solid through WW2. She's got seniority around here, so don't diss her!

They would be much lower on the totem pole, if they hadn't had the sense to license the top Motown hits for their performances. They claymation pitchmen were led by the voice of Buddy Miles, a Jimi Hendrix alumni as well as founding member of The Electric Flag. The little wrinkled brown guys went on to market a whole line of merchandise, and appear in everything from comic books to video games.

Fat Albert and the Cosby Kids

Being a Filmation series, of course it had to have the characters organized into a band to sing a song at the end of each episode! Filmation sledgehammered this trope into every single product it possibly could - it would be worth the while to find out what horrible threats Gene Roddenberry used to keep their trademark trope off the animated Star Trek series. Anyway, this one makes God tier solely on the strength of The Cos.

Yeah, CT knew how to serve up Space Ghost! Here's the crew of Space Ghost, Brak, and Zorak. Are you sure you've been good enough to deserve this?

B-sides: Keep your hat on, because it's all downhill from here.

The only thing worse than the Bradys living light-years past their jump-the-shark date was coming back as a wacky cartoon with just the kids and singing even more mediocre, tepid, fill-in songs. Here they are in all their groovy '70s glory with "In No Hurry."

Barely a blip on the radar, these guys filled out the bottom half of a combination Hanna-Barbera double-bill TV series, Frankenstein, Jr. and The Impossibles. Both mini-shows were about crime-fighting superhero cartoon characters; the latter actually used posing as a Beatles / Monkees type band as their secret identities. The Impossibles were Fluid Man (who could turn into water), Coil Man (hopping around on a spring), and Multi Man (who could duplicate himself indefinitely. Here's the Big Cartoon Database entry to prove that we're not making this up or stark raving bonkers.

Jem and the Holograms

It ran for just three years in the late 1980s and even '80s kids don't seem to remember it, but Hasbro put the same merchandise-franchise machine that succeeded with G.I. Joe to work to try to market to the female demographic. It only party worked, and though it has a niche cult following today, Mattel fought back by making Barbie an idol singer too, and the sales of both suffered. Here's its Hub page. Surprisingly, the songs were above par for this kind of production, with the series hosting several bands and individual characters with their own styles, genres, and songs.

A Disney channel combo: half live-action and half-animation, with the main character a hapless, awkward teen who fantasizes of becoming a rock star, and said fantasies are shown as animated sequences. We all remember it only too well, as it just came out in the 2000s. Even less successful as a franchise than the above-mentioned Jem.

Yes, Sonic the Hedgehog, the video game, became a cartoon, and said cartoon depicted the characters in a band. Nobody knows why.

So obscure they've never even heard of themselves: From here, it gets ever sillier!

Our research staff just starting curling up on the floor in the fetal position and bawling at about this point. But yes, there was a rip-off of The Beatles in animated dog form, done by CBS as a direct time-slot competitor to the animated Beatles running on ABC. Furthermore, the doggy duo impersonated Dean Martin and Jerry Lewis, to the bafflement of all. Good thing ToonTracker found a video on YouTube for us, or you'd never believe it.

We'll just dump you off on Wikipedia's doorstep for this one. You're on your own. The series only lasted for nine episodes between 1969 and 1971, having a career shorter than The Velvet Underground, which is really saying something.

The Amazing Chan and the Chan Clan

Even more obscure. Your first relationship with your junior-high-school crush lasted longer than this series, where a group of child detectives based on the character of Charlie Chan solved crimes and had a band. But one phone cam recording it off the TV is out there, so now we have to include it.

And you thought that '60s media was strung out on drugs. The gimmick with this late-'80s clunker was the White-Stripes type male/female duo, with the big fat guy as Meatballs and the skinny woman as Spaghetti. This credits sequence is literally the only proof we could find that this show existed, so watch it gently. Toonarific shares your hallucination.

A late-'70s entry from Hanna-Barbera rounds off our list, and is rightly at the bottom because even the nostalgic ones have to admit that this show sucked. Their band was The Neptunes, and the show was basically Josie and the Pussycats underwater with a shark mascot who... get ready to facepalm... stole his whole shtick from Rodney Dangerfield right down to the "I get no respect!" line. Lasted an amazing 16 episodes, a full year's worth. Oh, and there was a comic book...