How to be Scene 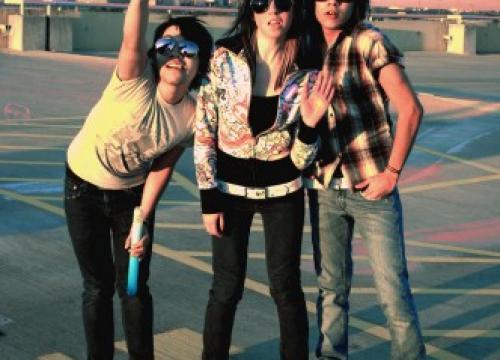 The only problem is, if you show up to a random small gig, you will likely end up standing at the back sipping your beer, and going home alone. That is, unless you follow this handy guide to being scene!

If you work a job where you have to be clean shaven and have respectable hair, it’s time to quit that job and embrace your new lifestyle. It’s a well-known fact that scene kids are bankrolled by their parents, so don’t worry about money. The first thing you need to do is research which hair styles are working right now.  Then go and spend $300 on getting pink and black tiger stripes on one side, with the other shaved artfully.

2 – Know Everything About Your Music

People who spend their weekends going to shows know all the lyrics to all the songs, and they want everyone else to know that they know these things.  Do your homework, buy their crappy self-recorded albums at the door, and learn to love their ear-bleeding sounds. Make sure that whenever you see a new band, you can sing along to everything they play the next time you go to watch them.

Standing at the back geek-bopping along won’t earn you any props in the scene, so you have to put on some sturdy shoes, remove all dangling piercings, and head to the front of the crowd.  No matter how sweaty and bruised you get, you have to stand there for the entire set, fighting others for your spot at the front of the stage.  Scream along to all the lyrics, air-punching for emphasis.

4 – Make Friends With the Bands

The entire point of being scene is being able to name-drop around other scene kids who are less well-connected. If you see a band member sweating without refreshment, buy them a cool beverage and hand it to them between songs. Bring extra weed. Once you are friendly enough with a band to be able to get up on stage and sing along to the anthem song they play at the end of every set, you can then move on to the next band.

This is also the only way, as a male, that you will be able to pick up scene girls.  If you’re not in a band, you need to be thought highly of by band members in order to scavenge their leavings.

It’s hard to start a trend in the scene, when all the good ones are already taken.  However, now that you have become accepted into this culture, it is time to assume your position as one of its leaders. Do something unique with your shoes, or get something horrific pierced.  Avoid trying to start hairstyle trends, as these usually filter down from celebrities.  Instead, go for colors nobody is wearing, ultra-retro if everything is ultra-modern, or incorporating elements of other subcultures’ styles into your own.

If you’ve done steps 1 – 4 right, the next time you go to a show you’ll be able to express disgust at how your unique style has gone “mainstream”.