Bands And Artists That Appeared on The Larry Sanders Show 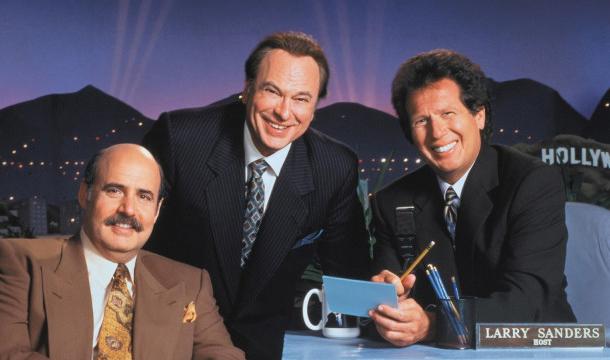 A whole generation has now come of age since the 1990s, and the highlights of that decade are sadly fading into the ether. What wonders will be lost to future generations, save the inquisitive rabbit-hole explorer? At least HBOMax streaming preserves the treasured classic that is The Larry Sanders Show, all 6 seasons.

For those of you who haven't seen it, this is the cable-aired sitcom creation of the late Gary Shandling, comedian, actor, writer, and prime impetus for this show. Here's the confusing (avant-garde for 90s) part: It's packaged like a late-night TV talk show, but it's actually a sitcom about the production team of a late-night TV talk show, with very little of the action happening onstage and most of it taking place in studio offices. The show was a mix of top-name talent at the time, each actor playing an impossibly wacky but deeply etched character. Hundreds of popular shows today owe a debt the The Larry Sanders Show for the ground it broke.

But the show within the show, the TV talk show, ran just like any production hosted by David Letterman or Jay Leno. It had guests (including yet more top name talent of its day dropping in to play cameos of themselves), and some of those were musical guests. Hence, with this contrived introduction, let's open the box and explore the treasures. No flipping!

First, there's this out-of-nowhere cameo with none other than the late Tom Petty, and you can see the clip with his part here. This is Petty acting, not singing, mind. He's pretty funny, getting into tussles with the other talent. The entire final episode was brimming with stars so we won't bother listing them, we'd be here all day.

Los Lobos was only the second musical guest in the show's history, appearing onstage for season 1 episode 2. They perform a clip from "Whiskey Trail" here. Los Lobos were no strangers to the camera, popping up in odd cameos in films like La Bamba (1987), Spy Kids (2001), and Colors (1988). But their music spans the soundtracks from hundreds of shows and films. Just because I'm a movie weirdo, here's Los Lobos' contribution to Eating Raoul (1982), "Diablo Con Mestizo Azul."

This was in season 2, episode 16, by which time The Larry Sanders Show had gotten more comfortable with itself and started playing with concepts. Here, the late Warren Zevon agrees to appear only on the condition that he not be asked to play "Werewolves of London" again - which of course is all he gets asked for after that.

Elvis Costello must have loved his time on the show, because he came back for seconds! First in season 3 episode 5 to perform "Little Atoms" on stage, clip here. Then again in season 5 episode 1, to take a more dramatic role directly involved in the plot.

One of these days, we have to do a whole piece on They Might Be Giants just to try to figure out their deal. Has there ever been a band with such mass audience appeal and yet no possible definable genre? TMBG appear in season 5 episode 13, performing a smoking hot jazz rendition of "SEXXY." Even Hank's assistant has to comment "good band" while Larry taps his pencil in time. Are you starting to see why this show was so cool?

Just to keep us on our toes, regular viewers are challenged with the psychedelic revival of Butthole Surfers, who appear onstage for season 5 episode 9. Larry is apparently not a fan this time, objecting to the group's pyrotechnic display with his usual deadpan sarcasm, and then later making a joke at the expense of their name - "butthole and surfing shouldn't be put together." Fair point, Larry.

Much to your undoubted amazement, Smash Mouth did not perform their hit "All Star" - because they hadn't written it yet! In season 6 episode 1 they instead play an earlier hit, Walkin' on the Sun." Here, this song itself gets a sliver of plot relevance; Winona Ryder is listening to the performance and Larry Sanders slithers up behind her to put a move on her, saying this is his favorite song. She calls his bluff by telling him name it then, and Larry is tongue tied, even during the part were Smash Mouth is singing the chorus… repeatedly.

The Larry Sanders Show is worth binging on streaming

If you're a fan of TV series like Parks and Recreation or Curb Your Enthusiasm, you should know that The Larry Sanders Show founded the "cringe comedy" genre. In your humble author's freelance career, I have to work with a wide cast of creatives to bring you all this blog and multimedia dazzle, so I can kind of identify on a weird level. In particular, since I hate being in charge but sometimes get shoved into the role, I identify with the character of Artie (played by the immortal late Rip Torn) on the show. So one more clipset of Artie at his Artiest, and we'll call that a wrap. You may now flip!