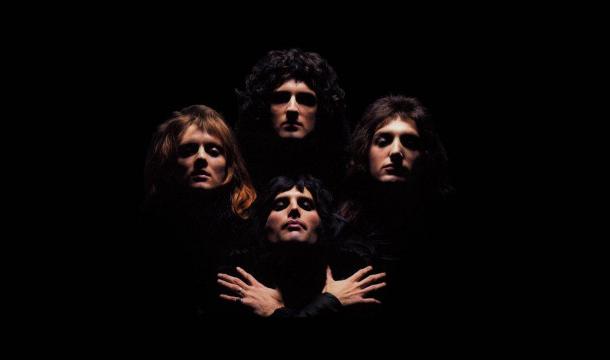 "Bohemian Rhapsody" by Queen is one of those songs that define the peaks of rock and roll history. It still has amazing popularity today, bolstered along by the late Freddie Mercury's enduring legacy extending to the movie Bohemian Rhapsody (2018). And how many songs can say they have a whole movie named after them (taking notes for future list post)? Of course we also have the Wayne's World (1992) homage / parody…

See, I have never been sitting on a bench on the street grogged out when a carload of bros loads me in and forces me to lip-synch opera. I don't know what I'm doing wrong.

How "Bohemian Rhapsody" Came Together…

The movie makes an effort to show us how the song was recorded in studio. This is a fictionalized account, of course, but surprisingly faithful to the story as it has come out.

Frank Moriarty's book Seventies Rock : The Decade of Creative Chaos lays out the definitive story of "Bohemian Rhapsody"'s composition. This book just so happens to have a forward written by none other than Queen guitarist and songwriter Brian May (check out Brian May's website! He even blogs!), so we can be confident that Moriarty had a good source. On "BR," we hear the story from Queen's longtime producer Roy Thomas Baker…

> "Freddie was sitting in his apartment] [and said 'I've got this idea for a song' and he sort of sat down and he sort of started playing the song. He was playing away and he stopped and he said 'Now dears, this is where the opera section comes in.'

The recording procedure, combining all these overdubs, pushed the limits of recording technology at the time. The tape was starting to wear through from all the playbacks. The song was included on their album A Night at the Opera, and would go on to break chart records in every direction, including a resurgence in popularity after Freddie Mercury's demise. Legendary Beach Boys producer Brian Wilson admits to an almost religious respect for the album.

First off, we have the typical musician assertion, reportedly uttered by Freddie Mercury himself, that the lyrics are just "rhyming nonsense." Sure, but that's what all the rock stars say.

The most face-value interpretation is that the song is a Faustian opera about a man who has accidentally killed another man, and is either on trial and sentenced to the death penalty, or has made a bargain with the devil to escape such fate. Whatever, this song is his lament and spiritual epiphany, on the eve of the subject's execution. Comparisons are made to Albert Camus's novel The Stranger, which has a similar plot.

Chris Smith, from the band Smile (the band which broke up and reformed with Mercury as Queen), relates that Mercury would often play snatches of songs he was thinking about and the second section of "Bohemian Rhapsody" ("Mama I've just killed a man") was originally something Mercury called "the cowboy song." This would have been an idea based on many an early Country & Western song in which the singer laments a life of crime and confesses to murder. For one example, see "Folsom Prison Blues" by Johnny Cash.

On the side of arguing for "rhyming nonsense," the opera section does indulge in some playful allusions to more famous works, kind of a meme-hash of opera, historic, and mythology tropes.

So this part throws us into a tangle of potential hidden meanings and interpretations, or it could simply be a case of "it sounded good with the music."

Mercury himself once said in a 1985 interview that this song was merely three song fragments that he wanted to do, and they ended up being mashed together.

Now we get down to brass tacks: Mercury, as we all know, was gay, and had issues with that identity based of course on the social stigma which that identification experiences in society, even in the UK. Music scholar Sheila Whiteley in her book Queering the Popular Pitch writes that Mercury had a turning point in his life when "Bohemian Rhapsody" was written. He had been living with a woman, Mary Austen, his "beard," but had just left her after seven years to embark on his first affair with a man. Whiteley indicates that the "mama" in the song is Mary Austen, while "I just killed a man" is his confession of love for a man.

Thus the whole song is a metaphor for "coming out" and facing the sodomy laws at the time. Is this reading too much into it? Freddie Mercury's lyrics never were that straight-forward, Mercury being far more concerned with the heat and energy of the song while focusing less on the lyrics.

As anyone can see… "Bohemian Rhapsody" is first off a fiercely creative work which was at the time a feat of recording engineering beyond anything attempted before. It is also one of the most atypical rock songs, with its various sections and shifts in tone. So even if it is truly "rhyming nonsense," it still justifies its existence as Queen proving that they could do anything they damned well pleased.

"Any way the wind blows."