Let's Hear a Round of Clicks For Six of the Internet's Favorite Meme Songs! 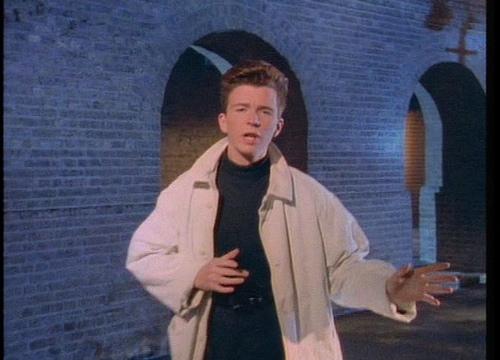 The most fun part of this article is that you'll be afraid to click on any of the links for fear of being Rickrolled!

There, we got that one out of the way. No, we're not going to mention "Never Gonna Give You Up," because that's the first one you expected to find, which goes to show that we don't even need to mention it. Except to point out that we're not mentioning it. But there's plenty more where those came from, and perhaps you've forgotten some of these favorites - maybe we can even look forward to a box set someday of The Internet's Greatest Hits!

I Am Your Gummy Bear - For a minor 2007 song released by a German artist name of Christian Schneider and mostly famous for being autotuned, this sure has turned into a cottage industry. Now there's an official Gummibar website. Suddenly, there's a band, commercials for an album, a DVD, coloring books, lyrics in 25 languages. What happened to our simple innocence?

The Assumption Song - By the Canadian musical comedy trio Arrogant Worms. These kinds of songs are actually quite common - ballads in which it always seems like the next verse has to say something naughty in order to rhyme and make sense. In fact, such songs are even common as hand-clapping schoolyard games.

Chocolate Rain - This is one case where an amateur musician released a song on YouTube and gained international acclaim from it. Commercials, promos, an appearance in a Weezer video, a Robot Chicken mention... It's a dream come true.

Mean Kitty Song - Another bedroom-indie who launched a career exclusively from the Internet. Cory Williams started out on Newgrounds and then MySpace, before his hit song about his cat 'Sparta' made him Internet-famous in 2007.

You Are A Pirate! - How did this Icelandic kid's TV show get such an international following? And, more to the point, who writes those catchy tunes for Lazy Town? That last one if easy: He's Mani Svavarsson, and he's got a fan page here.

Still Alive - If nobody has explained it to you yet, it's from a video game. Portal is a game based on the Half-Life franchise in which you escape from an underground laboratory using a gun that shoots dimensional rifts called 'portals,' all the while with a sadistic, sarcastic, artificially-intelligent computer trying to kill you. At the end, after you've escaped, the computer sings this song as its final experiment log entry, calling what has happened "a huge success." As was this song, which has swept world-wide popularity amongst people who've never even heard of Portal. But don't just put blind faith in that cake!