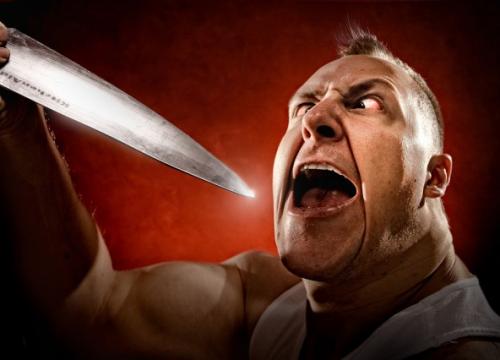 Some people hold it against a band when its members - or the main lead of the band - act in some divisive way. Whether you don't like the politics of the lead singer, or the bass player got into one too many drug scandals, or you just don't subscribe to the philosophy of the group members in general, you might find it impossible to enjoy their music because of that.

But for some of us, our attitude towards a band is colored by the fanbase instead. It's a complete mystery how a very talented group composed of perfectly nice people can draw such an antagonizing, annoying bunch of nitwits. But there you go. Especially in online interaction, if you play your band's fan-role too heavy, you'll scare people away from it. Which might be your intention, so you can keep your little cult following in your exclusive little club? If so, here's a guide to how to be a "fantard":

NEVER have a sense of humor.

Every single time you wade into an online discussion about your group or genre, take every single remark by anyone, no matter how trivial, as a declaration of WW III. Tolerate no jokes, ribbings, or even puns about the band's music, style, genre, fame, album cover art, or anything else. Allow no shade of gray to color your black-and-white thinking. Take everything as literally as possible, and rip the page about "sarcasm" from your dictionary.

Downvote and attack anyone who is not a fan of your band.

Because everyone who doesn't devote their lives to your band is a Bad Person. They're probably Nazis. They beat crippled children and drown kittens for fun. Allow no waffling here; even if they say they like the group, but just don't think of them as the second coming, the salvation of all mankind, and the cure for cancer, they're still villainous scum fit only to be relentlessly stalked and harassed all over the web for the rest of their lives.

Work your own personal whack-job politics into everything they do.

Have your own personal pet theories about the political significance of every song. Paint your obsessions over every discussion of their lyrics. Insist that the lead singer is a member of your political party or religion, or hammer their point of view into your own zealously-applied philosophy or sexual orientation. That way, you can even ostracize other fans, even though they love the band just as much as you do.

Never miss an opportunity to attack the members of a rival fanbase.

Because they're the worst enemy of all! Yes, the fact that they listen to a different band than you do is bad enough, but listening to a band that competes directly with yours is grounds for thermonuclear tactics. Showing up at The Enemy concert just to try to incite a riot isn't too much to ask. After all, you're out to prove to your band just how much you love them!

Hold onto your rabid fandom 20 years after the band's called it quits.

This is why you need to get tattoos of the band's name, logo, and lead members all over your hide. Never let them die! Decades after their star has faded, you'll still be in forums flaming at a third generation of new music fans about how They Just Don't Get It and never will. This is also where you get to pretend that the band was a much bigger deal than they actually were. Insist that these new kids can't appreciate how things were back then, the spirit and zeitgeist of the times, and how perfectly the band addressed it.

Declare yourself a TRUE FAN and constantly mock everybody who doesn't act just like you do.

After all, you're the only one who's right, and there's no other way to see things but from your point of view. You have to do something to stop these damn newbies from invading your turf! Be absolutely xenophobic about every attempt to brook your treasured fanbase. Nobody can really understand this band's music unless they have them on vinyl, own every T-shirt, have every lyric memorized, have burned incense at your shrine to the members every day, and have declared jihad on every non-fan, just like you do all the time.