My Music Story : Cage the Elephant 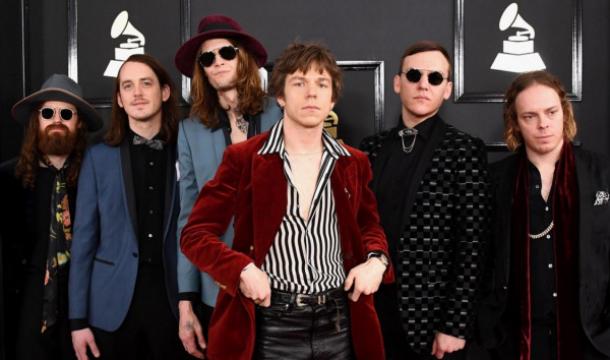 We're going to do something different today. Here at Lyric Interpretations, we obviously discuss the meaning of a song on our lively discussion boards. But what about the subjective meaning? People share that sometimes too, a personal story about how a song hits them, based on a specific life experience they had.

That is an interesting phenomenon! Most people have had this experience: A song is playing randomly within earshot, possibly the radio, a friend's shuffle list on stereo, the store muzak, etc. And then you have some impressive life event that attaches itself to that song, like a mental bookmark. Hearing the song years later triggers the memory, which might be sad, sweet, or just plain funny.

What would happen if we all shared our favorite "trigger song" stories? Well, that's what we aim to find out in our wild experiment at the Utility Muffin Research Kitchen! I'll go first…

My "Ain't No Rest For the Wicked" Story:

This would have been in the late-2000s / early-2010s, as one would expect since Cage the Elephant only dropped "Ain't No Rest For the Wicked" in 2008 as a CD single. And it's… kind of a lowlife story, so maybe consider this a trigger warning here for violence.

I'm sure everybody has that one "friend in trouble intervention" experience? For me, this involved, long story short, a friend of the family - my then-teenage daughter's boyfriend's cousin and her beau, if you care that far. I'll call her "Alice," this friend of the family, and him "Bob," her beau. I could have picked "Jack and Diane," but they weren't that kinda couple.

Lately in entertainment news, we have the media circus around Johnny Depp and Amber Heard and their big nasty divorce with charges of abuse and general domestic hell. Then we got the Oscars kerfluffle earlier this year at the Oscars, which raised the weird rumors about the, ah, "quirky" marriage of Will Smith and Jada Pinkett. Does this seem like a good time to discuss "toxic relationships"?

"Alice" and "Bob" were a highly toxic couple. Both of them were alcoholics, there was a kid that got taken away by CPS, they'd fallen farther down the skids trying to get the kid back, just a depressing junkie mess, the both of them. Now, by happenstance (it's a small town), I had known Alice for many years, and she had been a very bright young lady with some education and positive career prospects ahead of her. Then she met Bob and hit the skids down to bummerville. As for Bob, he had a head injury, which affected his personality and wasn't entirely his fault, but he was also a hardcore substance abuser, which made her one too. In fact, whenever they tried to clean up, the other dragged them back down. They were the worst kind of toxic relationship; in some kind of love, but still very bad influences on each other. Two poisonous scorpions reinfecting each other.

Of course, Alice and Bob would fight.

Now here's how this jig went down:

One young spring afternoon, my daughter's boyfriend was over to visit. His phone rings in his cargo shorts pocket, and it's Alice, crying hysterically and asking him to come over. Since there were quite a few of us lollygagging about the estate that day, answering this call immediately became a team mission: Me driving my daughter and her boyfriend over to sort out this Alice and Bob business. As we were briefed on the way over, Alice and Bob were just toxic for each other, both of them aggressors and abusers. Our mission was to separate them, move her out, and see to it they both got some counseling / detox.

Before you ask, yes of course, we also called the police 911 to meet us there.

Us three plus 2 cop cars convened at Alice and Bob's seedy downtown apartment. Both of them were outside yelling and cussing, both of them were beat up and scratched, and Alice had originally called us because she was afraid that she had KILLED Bob, after pushing him off a second-floor balcony just now while the two of them were tussling. Bob had taken a resultant tumble down a flight of outdoor wooden steps and now had blood coming out of his scalp. But maybe one head injury wasn't any worse than another, because he seemed less concerned about the situation than anybody else.

The scene of general mayhem you would be picturing in your head is just about exactly how this played out. Us 3 friends plus 2 cops peeled Alice and Bob apart, and the cops understood we were there to move Alice out. But this took time; we were running up and down steps clearing out Alice's stuff, Bob and Alice using the distraction to start up yelling at each other again and eventually straining against the cops to try to swing at each other.

These were nice Midwestern cops, you should understand, not prone to gun-happy violence like major city cops would be. But still, things were damn tense! Me and the 2 kids hustled Alice's stuff as fast as we could into our clunky minivan and finally got custody of Alice, while Bob would be taking a ride downtown first because, big surprise, he had warrants. But of course, nice Midwestern cops also play catch and release a lot, so we were certain that Bob would be back on the streets by the next day. As for Bob's tumble off the balcony, he wouldn't dream of pressing charges, he was convinced they could still work it out…

As the day's last dwindling sun set, we piled back in the car with Alice, who was a crying, hysterical mess. As I discovered once enclosed in a car with her, she was also drunk to epic extremes, barfing and ready to plunk on the bathroom floor or minutes from pissing herself. As we set out for home, I struggled to see out steamy minivan windows, between the Midwest humid spring air and enough alcohol fumes to cause an explosion if somebody lit a cigarette.

I cranked down the window and stuck my head out, driving the steering wheel at an arm's stretch, almost the only car on the road this evening. It was the only way I didn't pass out from the alcohol fumes. In between my gasps, we're all reassuring Alice it's gonna be OK, you're not gonna die, we'll get you fixed up, etc. So somebody cracked on the radio.

Cage the Elephant's "Ain't No Rest For the Wicked"

And out came "Ain't no rest for the wicked, money don't grow on trees! I got bills to pay, I got mouths to feed, there ain't nothing in this world for free…"

Oh, I could identify! Even though the song describes various people (a hooker, a robber, and a priest) taking the low path in life while explaining that life just sucks that way. I identified with it more with the general tone, crashing down in society, more problems than you know how to handle. I was smelling the lowlife level of it all, while the philosopher at the back of my mind pondered the bizarre, maleficent hold some people have over each other. By themselves and sober, Alice was, as I said, a very together person and a joy to know, and even Bob was tolerable under the same circumstances; God only knows how much of his behavior was up to a cracked skull.

Anyway, there we were, driving home at night, me poking my head out the window on one side while the kids helped get Alice's window down so she could barf out the window on the other side… hopefully… and "Ain't No Rest For the Wicked" lodged in my permanent memory as the only time I have ever heard this song come on the radio.

"Alice" stayed at our pad, we nursed her back to life after a couple days and dogpiled on her phone so she couldn't call "Bob" back. Our family rounded up a shelter for her to stay and sort out her affairs. Both Alice and Bob did get medical-grade intervention and are separated today, though the last I know Alice wasn't quite weaned off the sauce, but is still living at a higher standard these days. Bob, after shuttling from cops to hospital for observation, wandered off and I haven't heard another word about him since. But who knows. We all hope for the best for them.

I'm telling you all this with no implications. I don't say who is wrong or right. A hurt friend of the family called for help and we did what the police advised was for the best. Nobody here makes anything more of the incident than one more day of us rats scurrying through the maze of society.

Most of you will say that "Ain't No Rest For the Wicked" reminds you of the hit video game series Borderlands, or perhaps you heard Cage the Elephant perform this number on the David Letterman Show. The song has also been featured in a few film and TV soundtracks.

But this. This is my Cage the Elephant story. Every time I hear this damn song, I go right to a steamy humid night in the Midwest on an errand of mercy for people only remotely connected to me. I'm sure some of you can think of similar stories, because life sucks that way.