My Music Story: Alice in Chains 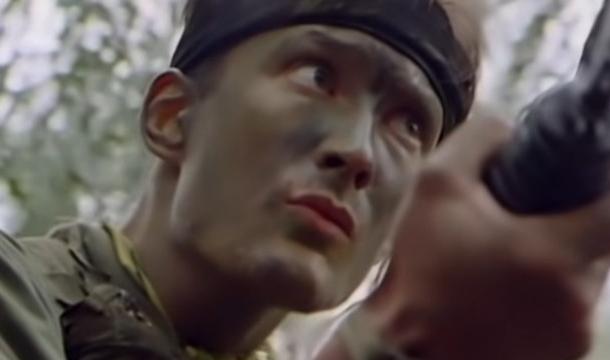 Just a few days ago as of this writing, Pearl Jam celebrated the 30th anniversary of the release of their album Ten, a landmark work which codified the emerging sound of the grunge genre. And let me tell you kids: The birth of grunge was something else. I don't know when else we'll get to experience the sudden spontaneous emergence of a brand new genre like we did with grunge. First there was no grunge, then Nirvana, and then the whole world went grunge-happy at once.

If you take Nirvana, Pearl Jam, and Soundgarden together, they are the holy triad of grunge music, the founding fathers, the originals. In the early 90s, I would be periodically going about my business when some friend would cruise up with a grange band track by one of those playing, and I'd drop everything to ask "What is that? It sounds amazing!" But for me, the moment I realized that grunge was here to stay was not ushered by a song from any of those three, but from a near-forgotten band today called Alice in Chains.

So this is the second installment in my "music story" mini-series, where I talk about a song's meaning in the subjective sense, what it means to me. Get out your buffalo wings barbecue sauce and wait to see the poultry specialty of the day.

This is the story of how I came to hear Alice in Chains' "Rooster" a hundred million zillion times. This is because the local alternative radio station played it at least once per hour all day every day for weeks. Even though I had to admit that it was an awesome song, I got bloody sick of it from the mass repetition.

But this was 1992, and I was still naively trying to fit into the normal world by being a corporate drone working wage jobs. As it happened, I was working night-shift security at a hotel, the now-defunct Days' Inn off the 91 freeway on the Fullerton / Anaheim border in California. The night clerk kept the lobby radio pegged to the local alternative station, and so "Rooster" randomly playing as 2AM whenever I'd breeze by for coffee between my rounds.

I was in security work because I was still pondering a full law enforcement career. And I could do worse than the Pinkerton agency - yes, the famous one - especially posted at this hotel. Just five minutes north of Disneyland, it counted on a steady stream of tourist traffic, while also occupying a slummy area with high crime and clashing rival gangs. To top it off, this place was ten times grander than any other hotel you'd think of when you think "Days' Inn," which is now known as a rock-bottom budget brand. It had previously been Griswolds, which in its day was fairly posh, but had now been bought out by Days' Inn after Griswold's chapter 11.

The hotel hit the skids hard after that. Griswolds' Inn boasted a six-story tower, pool and jacuzzi courtyard, gym, three spacious ballrooms, a pretty nice restaurant which had been named "Ruby Begonias" when it was a Griswold's property, and a bar fitted with widescreen TV and pool tables. The restaurant kitchen alone was gigantic. Days Inn bought the place and generally ran it like a Motel 6 off the interstate. It was I, a contracted security guard, working with a perpetually disgruntled night shift clerk, running the entire hotel from 10PM to 6AM. I got to know local cops on a first-name basis because we had to call them out so often.

Rattling around that place mostly by myself, it felt just like the Overlook Hotel from The Shining. I'd turn the corner in the hall expecting to see twin ghost girls beckoning me to my doom. When I wasn't throwing out yet another gang running drugs, chasing down perverts exposing themselves to families coming back from Disneyland, or trying to break up a drunken brawl that had broken out in a wedding reception in a ballroom, that is. Fun times. 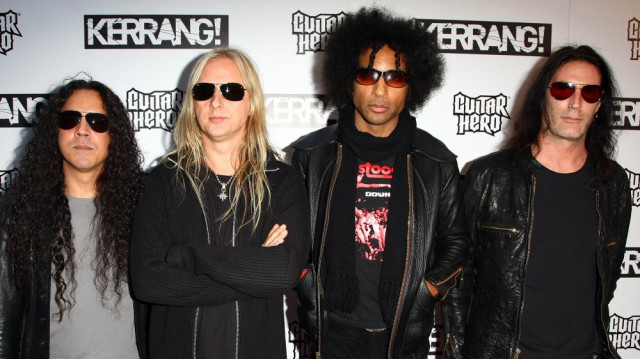 Alice in Chains "Rooster" is About Vietnam

Lead singer Jerry Cantrell wrote "Rooster" about his dad's experiences in Vietnam. He recounted his experience playing it for his dad for the first time:

> "He's only seen us play once, and I played this song for him when we were in this club opening for Iggy Pop. I'll never forget it. He was standing in the back and he heard all the words and stuff. Of course, I was never in Vietnam and he won't talk about it, but when I wrote this it felt right...like these were things he might have felt or thought. And I remember when we played it he was back by the soundboard and I could see him. He was back there with his big gray Stetson and his cowboy boots — he's a total Oklahoma man — and at the end, he took his hat off and just held it in the air. And he was crying the whole time. This song means a lot to me. A lot."

The American-Vietnam conflict was a historic event which cast a shadow over all of us born Generation X; we grew up hearing about it and living in the aftermath. For the longest time, Vietnam veterans struggled to be recognized for their sacrifices in this unpopular war. And the rest of us struggled to discover just what the heck it was about that war that had gotten under everybody's skin so bad. It was something difficult to communicate, which left us all feeling like something ghastly and atrocious had been dug up, examined, and then buried again without proper documentation.

So to be Generation X in the 1990s meant to be constantly working alongside Vietnam vets, many of whom suffered untreated PTSD, and then seeing the series of horrific movies about Vietnam coming one after another. But this had all happened when we were babies, so we had no idea. "Rooster" captures that in its lyrics and instrumentals. Not just a song describing the experience of the Vietnam War, but expressing the longing to connect with a lost generation, the second half of the Boomers.

At a different post - still under Pinkerton - I'd even worked with another security guard, a sergeant, who had been a Vietnam veteran. He would tell stories about his time serving, but would always trail off when he got to the part where he was taken a prisoner of war. He would just fall silent after that and stare into space until I'd yell and shake him to snap him out of it. Outside of that, he was a gentle, soft-spoken man with an obsessive compulsive streak. He had a pepperoni pizza for lunch every day, brought the same suitcase with the same red pan and black pen, set the pens in the exact same order and position on his desk every day, and went right to pieces of somebody moved his pens. I came to realize that he was just hanging on by a thread. 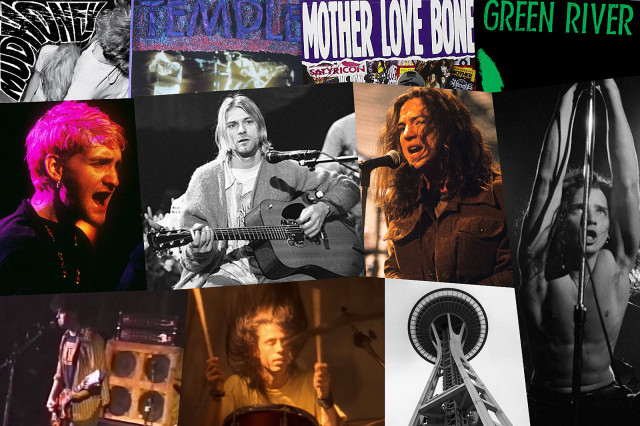 To this day, we haven't found anybody who can pinpoint what it is that caused grunge music to take over the early 90s so abruptly. Suddenly the "Seattle sound" was the only thing that mattered, and the previously cool heavy metal genre just sounded like aged, out-of-touch junk in the early 90s. That decade, I guess, was as good as any to stand for the defining moment when Generation X toddled out onto the world stage, which happened to be having intermission.

So it was all about the transitions. Old guard passing the torch to new guard. Heavy metal to grunge. The last decade of the 20th century. Watergate passing to Reaganomics. The home computer revolution and dawn of the Internet. Everything was changing at once, and I could hardly find a cherished childhood memory that wasn't getting bulldozed for another housing development.

The defining moment which I have as a memory of Alice in Chains "Rooster," however, was a mundane and quiet event. It was after midnight, I was in the lobby shooting the breeze with the night clerk, and a guest dropped by. The guest didn't speak English very well, but was asking us something about oranges. We were trying to figure out what he wanted: Orange juice, or fresh oranges, or perhaps he wanted directions to the city of Orange or Orangefair Mall or Orangethorpe Avenue?

Nope, he was struggling to express something about where oranges come from. After a minute, the light bulb went off in my head and and ducked into the closed restaurant area, snagging an orange off a fruit basket. I brought it to the lobby, and held it up next to a potted tree in the lobby so it looked like it was growing there. The man laughed and pointed at me, nodding his head. Yes, that was it! He wanted to see the orange groves!

You could see his point: This was Orange County, California, which has half the streets and building names using the word "orange" in the title. So where were all the oranges??? Both the clerk and I had to shake our heads sadly. The 91 freeway, AKA Riverside freeway, had once been lined with orange groves solid from Anaheim to San Bernardino. I had driven past them many times as a kid. But one by one, they had all been replaced by condos, used car lots, and suburbia. What had once been farmland was now concrete jungle. Orange groves, hell, you were lucky to find a single tree anywhere in Orange County.

And in the stunned silence, while the disappointed guest thanked us and left, Alice in Chains came on the radio: "Ain't found a way to kill me yet! Eyes buuuuurn with stinging sweat! Seems every path leads me to nowhere!"

In that moment, I realized three things:

Where are the orange groves? They're all gone, old man, they paved paradise and put up a parking lot. What happened to my 80s pop? That's ancient history, old man, we follow Seattle now. Where are the lessons we learned from the Vietnam War? All forgotten, old man, they shut down schools and turned them into football stadiums. Where is my robust economy? Forget it, old man, we shut down industry and now we're trying to run an entire nation based on a FIRE economy. The Boomers ate all the oranges and left none for the rest of us, but we still have plenty of war to go around.

They have, indeed, come to snuff the rooster, and the rooster stayed snuffed.