I Predict a Riot: 5 Songs of Protest 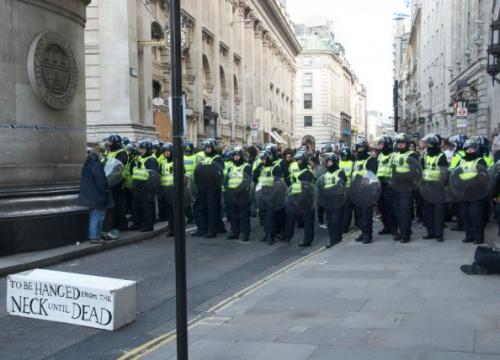 This was a big week for Londoners as the worst riots in over 30 years spread across the capital, under the guise of democracy. Violence sparked in the summer heat. Unrest, looting and arson became the hallmark of a rabble of under-employed thugs, who thought it amusing to fire-bomb old ladies, vandalise people’s homes, and rob small businesses in their own community. Eh? Our green and pleasant land seems to have turned into a war zone.

I am all for iconoclasm, but somehow I don’t get the democracy in Molotov! Still, this got me thinking about rebellion and how bands and musicians have expressed their ire over the decades. I also wondered if playing Andy Williams ‘Born Free’ at super- loud volume would have dispersed these twits, whose shameful behaviour has been universally reviled. Never mind the water cannon and rubber bullets – a blast of cheesy elevator music may have succeeded where the police did not!

If I was going to channel my inner rebel, I think I would pick a better sound than broken glass. So here are my top songs of protest for the playlist:

‘Anarchy in the UK!’ by The Sex Pistols. Hilariously, this no longer sounds as shocking as it did during the heyday of Punk. Formed in 1975, the Pistols were emblematic of the growing social discord in the UK. Their lyrics attacked Britain’s social conformity and their concerts and public appearances often ended in mayhem. John Lydon (a.k.a. Johnny Rotten) who formed the band now advertises butter on TV. Well, even the creators of moral pandemonium need to make a living!

‘I predict a Riot’ by The Kaiser Chiefs. Taking their inspiration from Punk and New Wave this Leeds- based band scored a hit with the second song to be released from their debut album. The NME ranks it as one of the ‘best indie anthems ever’...I have to agree.

‘Paint it Black’ by The Rolling Stones. I confess that my appreciation of the Stones has grown over time. This song was released the year I was born, so it was slightly before my time, but it sticks in my mind because it was used on the sound track of ‘Full Metal Jacket’ – I only have to hear the opening riffs to see helicopter gunships and smell napalm!

‘Weapon of Choice’ by Black Rebel Motorcycle Club. Describing their sound as garage rock, this versatile band draws on influences that range from hard rock and psychedelia through to folk. Taken from their fourth Album, Baby 81 this song rocks me to my core and speaks to the futility of violence. As the tune says: ‘There is no weapon of choice to free us all’.

And finally, for those of you who think I may be too soft on the rioters...? Their song has gotta be ‘’Make them Suffer’ by Cannibal Corpse. Lock them all in a soundproof room and make them listen to this for 24 hours. I guarantee peace!