How Do You Solve A Problem Like Lou Reed? 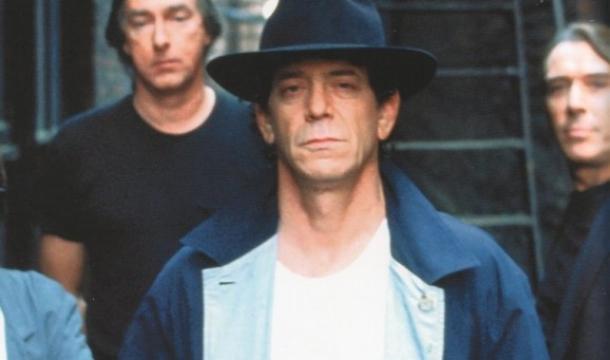 At the age of 71, Lou Reed continues to be a unicorn. And that is because this is precisely the person he wants to be. Recently this old Guardian reprint of a Lou Reed interview with Lester Bangs has been making the rounds, which reminded us that we haven't taken notice of one of rock's most enigmatic figures in a long time.

And here the name "Lester Bangs" came up already! The late, celebrated rock journalist has his fate intertwined with Lou Reed's, like the Corsican Brothers. It was Lester Bangs who first said of the Velvet Underground album White Light/White Heat, that it was his litmus test for sorting a True Punk Rock Fan from a mere hipster, via examining if the album was in their collection and well-played. It was Lester who reviewed every Velvet album when it came out, and Lester who repeatedly attempted to get the closest to Lou Reed's soul in subsequent interviews, including the write-up in Let Us Now Praise Famous Death Dwarves. It was Lester who continued to follow Reed's career after the Velvet breathed its last. Here's Lester raving about the Lou Reed single "Sally Can't Dance."

Despite having their own pet evangelist, despite having such a raving cult following, the Velvet Underground never charted so much as a banana and even after, you could count the Lou Reed singles that have charted on one hand. Probably the most well known Reed single is "Walk on the Wild Side":

It's such a signature song for both Lou Reed, and by extension the Velvet Underground, that their coffee table book is titled The Velvet Underground: An Illustrated History of a Walk on the Wild Side, despite this song having come out post-Velvet. And then there's the song that serves as Lou Reed's personal signature song, the one he gets asked to play at live appearances these days, "Sweet Jane", all 8 minutes of the album version:

And then there's his #1 charter in the UK, "Perfect Day," which made the background music for the overdose scene from Trainspotting so perfectly poignant:

Oh, and let's not forget (while we're on perfect film soundtrack usage), Reed's cover of "this Magic Moment" from Lost Highway:

And then... Just pause for a moment and catch the sneaky, contrary enigmas that have popped up:

(1) The Velvet Underground has been christened the original, American, "proto-punk" band, mentioned to this day in conjunction with punk rock in America, sometimes even ahead of the Ramones and MC5. Did "Sweet Jane" sound punk to you? Did "Perfect Day"?

(2) Most artists, if they only have a few hit singles, tend to have them clumped together within a few years of each other and then a long haul to obscurity. Reed was born in obscurity and thrives on it, yet he randomly scores a big hit this decade or that decade, and it's always this unexpected blindside because he keeps evolving. How does he do that?

The man himself is just made of enigmas. Notice that he's associated with the heroin scene thanks to the VU song of the same name, amongst many others, plus being associated with the kinky sex / bondage scene thanks to the name of the band itself and songs like "Venus in Furs." Yet really, he doesn't come off as all that hedonistic himself. He doesn't get himself busted in a drug and/or sex scandal the way other celebrities do on a regular basis.

And for somebody so associated with hedonism, does he pair off with a coven of squealing groupies half his age? Somebody with a bad girl reputation herself, perhaps? No, he pairs up with Laurie Anderson, the sweetest little ice-cream ray-of-sunshine you'd ever meet... who, herself, is also an enigmatic experimental music artist. Here's the Anderson hit "It's Not the Bullet that Kills You (It's the Hole)," just in case your day needed some sparkly magic:

And yes, they've shared a stage together, such as this press conference about one of their projects:

See how she mellows him out? Get him next to her, and he turns into a big fluffy teddy bear. Even then, he has a delivery more reminiscent of Jack Nicholson on the edge of blowing up than your typical rock 'n' roller.

And with other collaborations, he picks only his peers. His longstanding match-ups with David Bowie is a perfect example; Bowie, too, is an enigmatic unicorn who ardently resists easy categorization. Mind you, he can also pick a gig; Reed has performed before Pope John Paul II, no less. He's active in theater productions here, guest appearances on an album there... He stays busy.

Lou Reed has a long-standing reputation of being one difficult cat to corner in an interview. Approach him and be just a little bit off your game that day and he'll toy with you for a few rounds, then burn you to the ground and dismiss you. Try to pigeonhole him into a genre and he'll reinvent himself in his next album just to spite you.

As the recording artist Uffie said after a tussle with Reed over song rights (over a Velvet Underground sample used in one of her songs), Reed is "f***ing difficult." Yes, and sometimes it takes a guy that stubborn, that puzzling, that difficult, to be a music legend for six decades. Really, Lou Reed knows what's up and where it's at; the rest of us can go straight to hell.