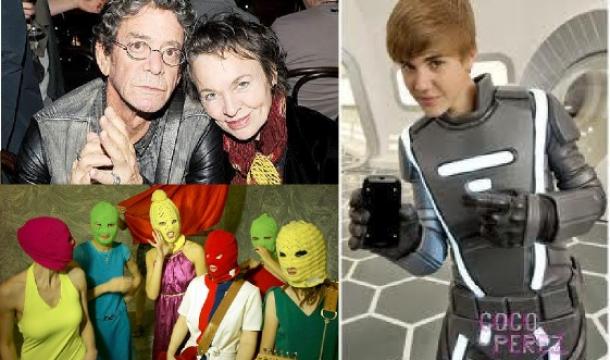 We're trying a new thing here. Every week (probably Friday) we'll do a quick wrap-up of the week's events in the world of music and give readers a one-stop "TL;DR" top-stories recap for those interesting events they missed. After all, it's what blogs were originally invented for.

Quite a shock to Reed fans, he had to get a liver transplant. The shock is divided between those who thought Reed was actually a pretty clean-living kind of guy (early VU songs notwithstanding), and those who are amazed he made it this far based on his reputation. And while we're on the subject, do not Lou Reed and Laurie Anderson make the sweetest doggone couple? Here, we'll toss you wife Anderson's first released single:

Jack White, of White Stripes fame, heard that an historic Masonic temple in Detroit was under threat of foreclosure, so he paid the $142K tax bill out of his own pocket. Before we get to the fun Freemasonry conspiracy theories, White's motive was because he had played shows there and his mom used to work there. Wait, that doesn't help dispel the conspiracy theories at all, does it?

Pussy Riot is becoming more famous for their being political scapegoats than they ever were for their music. Maria Alekhina earlier started a hunger strike to protest an attempt by Russian guards to turn other inmates against her, but she has now ended it after they knocked that off. By the way, for those of you who have been following this story for two years and have yet to hear one Pussy Riot song, here's "Kropotkin Vodka":

Did you know director David Lynch makes music, too?

Apparently he's been doing this on and off in between films, but nobody's really paid much attention to it, sort of like his weather reports. If we told you right now that he also does stage magic, body painting, and chainsaw-carving on the side, you'd probably believe us.

They're sending Justin Bieber to space!

However, they will do this with a proper space suit, helmet, oxygen, a ship, etc. He will also return to Earth. Sorry to disappoint some of you. The Bieb's signing up with Virgin Galactic for the event. We're starting to feel left out of this whole space-tourism thing.