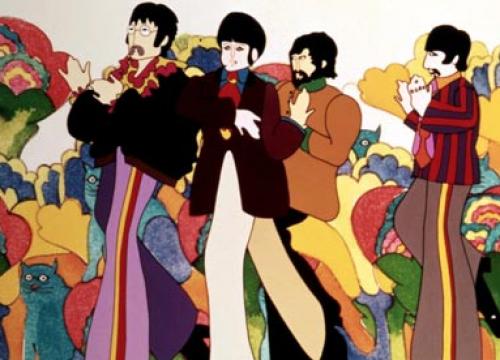 In October of this year, The Beatles' first hit single "Love Me Do" got a 50th anniversary re-release. The story of that's here, but we're not here to gush about the music legends' continuing influence. No, we're here to recommend adding the animated psychedelic masterpiece Yellow Submarine to your holiday viewing traditions, right alongside your old VHS copies (we know you have them) of How the Grinch Stole Christmas! and Rankin/Bass' works.

Now, this film has nothing to do with Christmas, this is true. But it has a number of aspects that make it perfect viewing between Christmas and New Years':

The film's fantastic look, unmatched even by graphic design and CGI of modern times, is the responsibility of one artist: Heinz Edelmann, who passed away just three years ago at age 75. As his NYT obituary explains, Edelmann never quite mentally fit himself into the psychedelic art movement of the late '60s, and yet he was more typical of the style than most.

Roger Ebert, pulling himself out of spoilsport-mode for a moment, gave Yellow Submarine a glowing review. He zeroes in on the important element of the script; the laconic, sardonic, witty script is just the perfect setting for both the artwork and the soundtrack. Without the constant whimsy and puns, it just wouldn't be the same story. That this script was written by committee makes it that more amazing, because usually having a whole pack of writers is a death sentence for a script.

One more reason this is a great film is that it has so far withstood the Hollywood Idiot Grinder that eventually destroys all other works. An awful troll has proposed remaking the film in CGI. Fortunately, the side of the angels won this time and the idea was shot down dead. Look, we're all geeks now, computers are wonderful for sure, but just because we can make something digital does not mean that it looks or sounds better digital. What next, re-release remixed Beatles albums with autotuning to make them sound like our modern tin robots?

Anyway, it's a tribute to this film alone that it resisted the attack of the trolls.

What sets this film apart is that it was made as a labor of love, not to make a quick buck. The Beatles were at the peak of their creativity and put their best effort into the songs, the artwork is inspiring and imaginative, the script was written to be fun, and you can even sense the director and producer were having fun at it. This is the womb from which great art is born. Only a Blue Meanie wouldn't love it.