When Your Heart Beats Faster Than The Drummer - Songs About Coffee 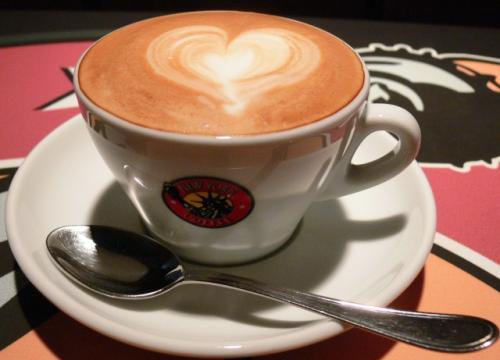 The black nectar of the gods is the patron drug of the web, the elixir of scientific progress, the fuel of computer geeks' midnight coding runs, the liquid inspiration sipped by late-night college students everywhere, the basis for an entire cafe industry, and the beverage that made the Pope in Europe change his mind about banning Muslim beverages. So, yeah, it's the kind of a big deal.

Drop by an Internet forum sometime and ask them how they take their coffee. It's hilarious to see everybody put on the macho as they try to outdo each other with how strong they take their road tar - and then you get the gourmet purists who snobbishly hold forth on the merits of espresso machines, grinding your own beans, roasting your own beans, using a French press, and so on. Oh, coffee is something more than a beverage in the Western world. So of course, popular music has given it its due.

First up is The Descendents. This is a college-rock punk band originating from Southern California who seem to need caffeine just to play their incredible speed-punk style - lead singer Milo Aukerman is gasping for breath halfway through every other song. First there's "Coffee Mug" from their 1996 album Everything Sucks. Then there's the... uh, philosophy they call "All!", first trotted out in their 1987 album All, in which coffee is elevated to a ceremonial beverage associated with achieving "All!". Even the song "All-O-Gistics" advises "thou shalt not partake of the dreaded decaf" as one of their commandments. Yeah, they're dedicated.

Then there's Jim Infantino (who went on to found his band Jim's Big Ego), whose song "Stress" (maybe fans thing it's called "Addicted to Stress") was a Dr. Demento favorite and featured on the 1994 album Dr. Demento's Basement Tapes No. 3 as well as Dr. Dememto's 30th Anniversary Collection: Dementia 2000!. It has whole verses devoted to the holy bean:

Yes, that sounds up to par!

And for the ultimate historic reference... No less than classical composer Johann Sebastian Bach penned "Schweigt stille, plaudert nicht", better known as "The Coffee Cantata", a short-subject comic opera about coffee addiction in 18th century Leipzig. One character asserts that if he can't have three cups of joe per day, he will shrivel up "like a piece of roast goat".

And before anybody tries to out-macho the author, be assured that he takes his espresso "cowboy style" (throw a horseshoe into the pot; when it floats, the coffee's done), refers to his bloodstream as his "caffeine system", and cannot die until the government finds a safe place to bury his kidneys.