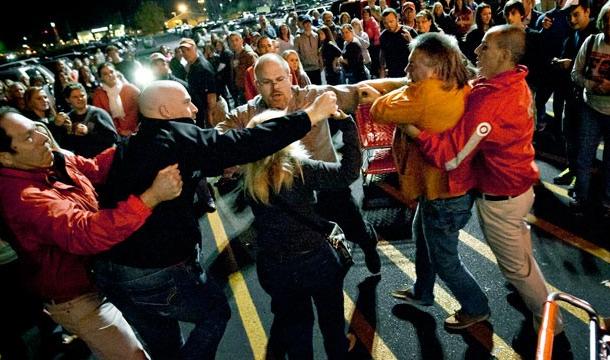 Renowned for attracting the kind of crowds who would think nothing of trampling on their own grandmother for just a few dollars discount, Black Friday has become a warzone for anyone looking for that post-Thanksgiving, pre-Christmas bargain. From The Clash's anti-consumerist anthem to La Roux's statement of defiance, here are five songs which capture the spirit of the retail industry's most chaotic and occasionally lethal time of the year.

It's hard to imagine the eternally grumpy 'Modfather' Paul Weller patiently waiting in line for 10% off an iPad but he still managed to perfectly encapsulate the disorientation, frustration and sheer hostility of the sales rush ("but it's not like the adverts all make out/and there's no one to greet you as a friend") on this reflective and melancholic Kinks-esque pastiche which appeared as a B-side to 1982 swansong "Beat Surrender."

The Clash-- "Lost In The Supermarket"

Three years earlier, another British rock institution, The Clash, had also bemoaned the increasingly consumerist nature of society with the eighth track from their seminal third album, London Calling. Written by Joe Strummer but performed by Mick Jones, "Lost In The Supermarket" also describes the band's struggle with suburban alienation and teenage disillusionment, but it's their shopping experience grumblings which makes this the ultimate anti-Wal-Mart anthem. -

It's unlikely that British chill-out merchants Zero 7 had the chaos of Black Friday in mind when penning this typically lush number from 2001 debut Simple Things. But with lines like "everyone's taking everything they can," "wait in line till your time" and "wasting my time in the waiting line," there are few songs which summarise the pure tedium of queuing for hours on end any better.

De La Soul - "Shopping Bags (She Got From You)"

The first single from De La Soul's 2004 seventh album, The Grind Date, might have been snubbed by BET on the grounds that the legendary hip-hop trio were no longer relevant to their audience. But "Shopping Bags (She Got From You)" will certainly still be relevant to many who check their credit card receipts in the weeks after November 29 thanks to its diatribe against those gold diggers who spend thousands at the mall without giving anything back in return.

Recent Black Fridays have seen a woman pepper spray her fellow customers in a bid to pick up an X-Box, another woman threaten to shoot other shoppers while in a queue at Toys 'R' Us and a Wal-Mart employee lose his life after getting caught up in a 5am stampede. The 'don't mess with me' message of La Roux's 80s electro-pop throwback, "Bulletproof," is therefore the ideal preparation for anyone seeking a bit of motivation before braving the Black Friday crowds. -