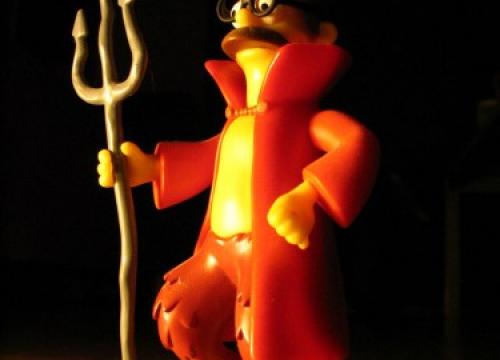 One of the great mysteries of music is why the heavy metal genre seems to have become so intertwined with themes of Occult Satanism. Why not Buddhism, Hinduism, Sufism, or any number of other belief systems? Remember, Satanism is just another kind of Western Christianity - you still believe in the Bible, you're just rooting for the other guy. OK, so the whole sound goes along with the pentagrams and goat's head - so if you want something that looks ancient and evil, why not Zoroastrianism? Heck, they worship fire - what could be more metal than that?

Anyway, some heavy metal bands play the Satanism thing for laughs, some do it for the image, and some merely pose. But within the modern metal genres - most notably black and death metals - there's the ones who go beyond merely using a pentagram for a stage decoration, but come as close as possible to making their whole career and lives one big Satanist tract. Here's six groups that at least appear to take Old Scratch seriously:

When the Stockholm, Sweden death metal group named their 1990 debut studio album, they picked Left Hand Path, to let you know they were serious coming right out of the gate. A name to know in Satanism is Anton LaVey, author of The Satanic Bible. Guitarist Alex Hellid pulled the term out of this book, explaining that he'd been reading The Satanic Bible a lot in the beginning days of the group. As a belief system, the Left-Hand Path is associated with Occult mysticism, Tantric sexuality, and Baphomet, which is a figure of Pagan deity frequently depicted as winged man with a goat's head. They must throw some boss parties!

The Florida-based death metal band calls their much-praised 1989 debut album Altars of Madness. Within are to be found such decadent tracks as "Chapel of Ghouls," "Immortal Rites," "Blasphemy," and "Bleed for the Devil." Group lead vocalist David Vincent confided in an interview that much of the inspiration for the lyrics came from the literature of H.P. Lovecraft referencing the Necronomicon. Now, while that's a fictional book in Lovecraft's stories, the closest thing we have to a real version is the Simon Necronomicon, a grimoire which draws much of its inspiration from ancient Sumerian mythology. In a nod to that, the group's song themes have gravitated towards more Babylonian flavors ever since. You didn't know this stuff would get so literary, did you?

If the Zurich, Switzerland metal masters didn't summon an actual demon with the cover art of their 1984 debut album Morbid Tales, it wasn't from lack of trying! The album, which saw re-releases in 1999 and 2008, bore cover art that has stood since as the band's semi-official logo. Lefty bassist Martin Eric Ain describes it as a combination of a heptagram as originally drawn for the Tarot by British Occult guru Aleister Crowley, a pentagram made out of daggers, and a skull. Ain tops this off with an inscription of the name "Pazuzu," an Assyrian and Babylonian demon named both in H.P. Lovecraft's literature and the novel The Exorcist. We're getting scared just typing that.

Oh, what do you do to show your love for the Dark One? Wear a lot of black and throw the goat's head every once in a while? Meanwhile over in Norway in the early 1990s, black metal fans have taken it to the next step and burned over 50 churches! And in the aftermath of this crime spree, who should pop up in the 2005 Canadian documentary film Metal: A Headbanger's Journey than guitarist Infernus and vocalist Gaahl of Gorgoroth, speaking in support of the acts of arson: "Church burnings and all these things are, of course, things that I support 100 percent and it should have been done much more and will be done much more in the future." Wow, that's what we call sticking to your guns.

This one's kind of a stretch. Varg Vikernes, the sole member of the black metal one-man-project, is just as much a Pagan (or even a Tolkien-ist, if Hobbit fans go that serious) as anything else. But when it comes to unchecked evil, you can't beat actually taking part in those Norwegian church burnings we mentioned last paragraph, putting the photo of the burned Fantoft stave church on the cover of his next album, and then murdering his old bandmate, Oystein Aarseth of Mayhem, for which he was convicted and served 16 years. Oh, and don't forget the militant racism, White Power affiliation, and just plain raving insanity. Vikernes has actually called himself every -est and -ist in the book, and also been disowned by everybody. But his music invokes Satanic-flavored black metal, so we'll plonk him here. Even though Satan himself would probably disown him.

There, now, after the other guys in this list, isn't this one a relief? You used to think of Black Sabbath as being the heaviest Satanists you know, and now compared to the above they sound like Polyanna on ecstacy. The most famous of British heavy metal bands mainly invokes some Satanic themes in their earlier work. Most notably, their debut album, Black Sabbath, released on Friday the 13th, February of 1970, had the title track inspired by Ozzy's having given a book about witchcraft (they don't say which one), to bassist Geezer Butler, who liked to paint his apartment black and hang inverted crucifixes in it. Butler then awoke the next morning with a nightmare very much like the scene described in the song, only to arise and find the book had vanished from his shelf. OK, you had a tiny visitation from a poltergeist, you get a free pass on this list - just this once!