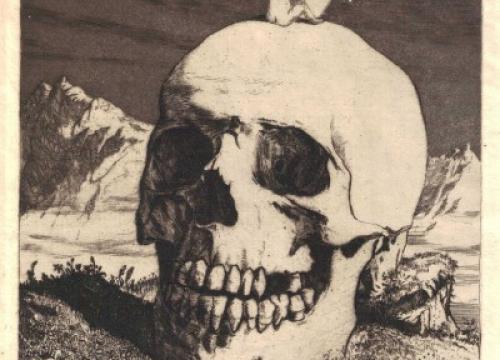 Whenever you see an alchemist or wizard's bookshelf depicted in a work of fiction, there's always a skull somewhere. It's an old cliche, but what does it mean? This is known in Latin as a 'memento mori,' a Latin phrase meaning (loosely) "Remember your mortality." Intellectuals keep it around to keep themselves humble; a constant reminder that no matter how high their ideas will get, in the end we are all food for worms.

And these songs do the same, often romanticizing the tragedy of dying young in the process. Whether they involve a fiery car crash, getting pumped full of hot lead, or simply take a long walk off a short cliff, all of these songs have mortality in common. By the end of this song, somebody (scare chord... dramatic head turn) will have died!

Cause of death: Train accident

This was a number-one US Billboard hit for Mark Dinning in 1960, but he proved to be a one-hit wonder. That's kind of a pun, because the female character of this story also was a one-hit wonder, being hit by a train.

Cause of death: Jumping suicide

This song tells a story as intriguing as any filmed by Alfred Hitchcock. We are left with so many unanswered questions: How come Mama didn't put two and two together about what the preacher told her, the news about Billie, and the narrator's lack of appetite? Why did Billie Joe kill himself? One assumes that Billie and the narrator were lovers in some sense, but even that isn't made clear. What were the narrator and Billie throwing off the bridge together? Whatever you do, don't look to the Internet for the answer to these questions; you'll find hare-brained theories that do everything they can to ruin the song and troll the fans. Mysteries are beautiful.

Cause of death: Auto accident

This is the song that Pearl Jam recently covered in 1999, making it more famous but rating #2 on the Billboard Hot 100, the same as the original 1964 version. We don't know much more about the story than "boy and girl drive car," "boy and girl crash car," "girl dead."

Cause of death: Auto accident

We won't fill this whole post with auto accidents (there's tons of them, especially from the 1960s), but we have to include the definitive example. One of the most romantic ways for a teen to die in the late-1950s to early-1960s was in a drag race, and this was the most popular of that subgenre. Known for being based on real geography (mapping actual streets in Los Angeles, California), and for becoming Jan & Dean's signature song.

Cause of death: Vigilante gunfire

This 1959 classic is one of the last of its kind, the romantic Western ballad. It tells its story very well, with airtight lyrics and well-staged pacing. The protagonist kills a man for making advances on his sweetheart, then flees town for fear of the noose. But he comes back for a visit to see his sweetheart, and on the way is intercepted by a posse. The posse guns our hero down, but he manages to crawl to her anyway only to die in her arms. So it's also an unusual song in that the narrator is the dead one, leading one to the conclusion that we are hearing it told by a ghost. Haunting and beautiful!

The Homecoming Queen's Got A Gun - Julie Brown

Cause of death: Homicidal/suicidal rampage

Let's end this morbid list with a lighter song; this is a comedy parody of teen-tragedy songs released in 1984. "Stop Debbie, you're making a mess! Powder burns all over your dress!" The narrator tells the story of her classmate Debbie, who gets crowned homecoming queen only to whip out a firearm during the parade and waste half the school. Most notable for being a Dr. Demento hit.