"I've Got Blisters On My Fingers!" 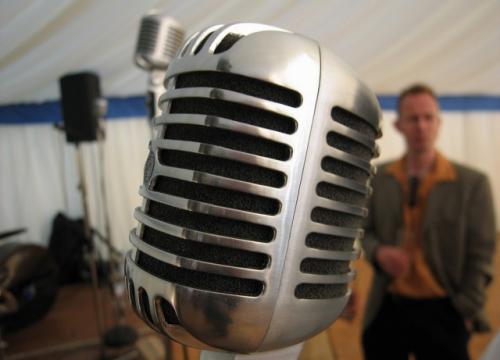 Rock stars in recording sessions say the darnedest things! Here's a list of in-studio chatter that made the final cut onto the album, in various famous examples:

The Beatles were famous for it:

"I've got blisters on my fingers!" - At the end of The Beatles' "Helter Skelter," Contrary to what you'd expect, it was not a complaint about working the guitar, but Ringo in fact throwing a temper tantrum about having to do 18 takes on the drums.

"I'd like to say thank you on behalf of the group and ourselves and I hope we've passed the audition." - spoken by John, not at the end of the studio session for "Get Back," but from the rooftop concert; Phil Spector edited it back onto the end of the "Get Back" track. And yes, that's also John at the beginning drolling, "Sweet Loretta Fart, she thought she was a cleaner, but she was a frying pan."

"'I Dig a Pygmy', by Charles Hawtrey and the Deaf Aids... Phase One, in which Doris gets her oats!" - again from Let It Be, John again cutting up. The 'deaf aids' is what they called their amplifiers, and Charles Hawtrey was a British actor, a real person, who had about 70 film appearances in British cinema between 1922 and 1972.

Frank Zappa was another notorious studio motormouth, as were The Mothers of Invention (but note that we're leaving out hours of impromptu skits from live performances):

"The Muffin Man" - Originally the final track of Bongo Fury, Zappa blows the line "he poots forth a quarter ounce green rossette...", cracking up with laughter before saying "Let's try that again!" and continuing.

The exclamation "Mother Mary and Joseph!" was so frequently heard from Mothers of Invention members that it became a catchphrase amongst Zappa fans and even got incorporated into the lyrics of songs like "Po'jama People."

And who can forget "Hi Boys and Girls, I'm Jimmy Carl Black, and I'm the Indian of the group!" from various songs on We're Only in It for the Money.

Radiohead's "2+2=5" starts with Johnny Greenwood plugging in his guitar and announcing "We're on!" followed by leadman Thom Yorke deadpanning, "That's a nice way to start, Johnny..."

Led Zeppelin's "Black Country Woman" starts with the sound of an airplane overhead captured by the recording equipment, while Robert Plant and an engineer discuss whether to keep rolling the tape or do another take due to the interference.

"Barbara Ann," by the Beach Boys, is a regular boy's locker room with everybody starting and stopping off cue and giggling.

"The other ones are complete bullshit!" This is how drummer Stewart Copeland chooses to introduce us to The Police's "On Any Other Day."

Bruce Springsteen on the Seeger sessions' recording of "Pay Me My Money Down" is constantly mumbling directions to the band, cuing the trumpet, calling for B-flat, etc. At one point he says "Alright, somebody take it!" because the song paused for a solo and the accordion was late with it.