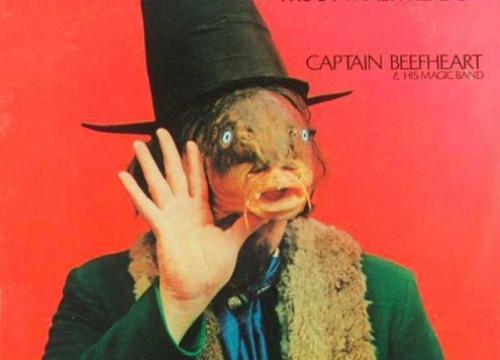 In recent years, you can't stumble into an Internet forum about indie music without bumping into Trout Mask Replica by Captain Beefheart. It's the ultimate hipster-cred album. Several forum denizens may have the album cover - Beefy himself in a pilgrim hat and fish mask waving from a red-to-fuchsia gradient background - as their avatar.

So is it that good? Oh, no no no. It is quite possibly the most cacophonous, dissonant, unlistenable album ever made. It is scary, grating, raving crazy, clashing and nonsensical and untuned and jangling. It sounds like it was run through a meat grinder. But every single note, beat, and syllable of every track of this album was intended to sound exactly as it does. Because, you see, this was science, not art. It is an experimental piece, amidst an experimental career, hosted by a musical scientist who was either mad, brilliant, or both, making research into music that we may not fully understand for another hundred years. But you probably shouldn't try dancing to it.

Yet, it was ranked #58 in Rolling Stone magazine's 2003 list of the 500 greatest albums of all time. Rock critic Lester Bangs called Beefheart "one of the four or five unqualified geniuses to rise from the hothouses of American music in the Sixties." John Cale of The Velvet Underground cited them as an influence. So did The Clash and the Sex Pistols and Gang of Four and Siouxsie and the Banshees. Oh, and don't forget Talking Heads, Blondie, Devo, and The B-52s. Comic artist Matt Groening (creator of The Simpsons and Life in Hell) is a raving passionate fan.

Frank Zappa produced it and even guest-performed on a track, which should tell you something right there. Captain Beefheart (born Don Van Vliet) frequently shared a stage with Zappa, and they had an on-and-off collaboration.

According to Beefheart himself: All of the songs were written in a single 8-hour session. His main compositional tool was a piano, which he had never used before. Songs were assembled haphazardly, piecemeal out of bits and phrases they liked. Then they were rehearsed with the insistence that they be played exactly the same way every time, and recorded in a professional studio. In that studio, the whole group jammed out the instrumentals in six hours flat.

Which is not to say that this process was easy on anybody. The group lived for 8 months in Beefheart's house in complete isolation, practicing 14 hours per day, with Beefheart berating and browbeating and even physically roughing up his motley crew, all while they had to live on welfare and donations from their families, which reduced them to living on a cup of beans a day for their sustenance. Drummer John French aptly described the atmosphere as "cult-like" and compared the house to Charles Manson's operation. You still love this album?

Well, you should listen to it. Here's how: the first time (do not use headphones), have it on a speaker somewhere softly, easy to ignore. Listen to it straight through three times, on three different days, just playing in the background. Now advance to individual tracks, replay the ones that intrigue you. Now put it away and don't think about it for a couple of days. This will be impossible, because individual lyrics and progressions will come back to haunt you. Impossibly, these decidedly uncatchy songs will get stuck in your head. Now come back and seek out those songs, again, that stuck with you. Now, at last, start listening to the album like you would normally.

Yes, it's a lot of trouble to go to, but if you want to be a member of a cult, you have to brainwash yourself a little. As the music sounds like it changes each time you listen to it, you will eventually discover that the album has changed the way you think about music forever. Good luck tolerating mainstream pablum after that!