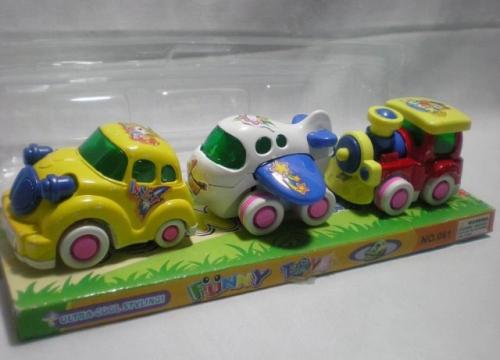 And now, for something silly. We'll begin our discussion of the ways in which vehicles and travel have been used in music with my favorite clip from the movie I stole the title of this blog entry from, Trains, Planes, and Automobiles, starring Steve Martin and the late John Candy:

My apologies for the adverts, I'm at the mercy of YouTube on this one. Still, a classic bit of hilarity. No matter where you live, most likely you get from point A to point B by one of the aforementioned modes of travel. Crossing town? Use the car. Crossing the country? Maybe a train would be best. Crossing continents? Plane, definitely (unless you ride the Orient Express). Americans have a love affair with the automobile, Europeans like the Underground and train travel, while business professionals everywhere feel the need for speed and use the jet airliner. Not many salesmen/women hopping aboard a trans-oceanic steamer for their business trip anymore, sadly. Besides, boats and sailing were covered in another blog.

Leaving on a Jet Plane- Peter, Paul, and Mary. Folk rock from the 60s never sounded so good or so bittersweet. Here the trio sing a tale of love and separation. "I'm leaving', on a jet plane. I don't know when I'll be back again" they sing, but it's the "Oh babe, I hate to go" that clinches it. If you've ever walked someone down a boarding gate and taken that last long look, or perhaps the other way around- you look over your shoulder, then you know that sometimes partings are rough. There is the hopeful line about "your wedding ring" that she'll be wearing upon her return, but the sting of loss is still there. On the downside the video and audio quality is a little sketchy here. Still, you have to appreciate the vocal harmonies and Mary's beauty.

Jet Airliner- Steve Miller Band. Moving our way through the decades, how could we pass up this classic rock tune from Steve Miller? Here the theme is not missing home and people, but getting up and getting out "on the road." The singer is heading out on a 707, despite the fact that "Somebody's trying to make me stay." Hey babe, "you know I've got to be moving on." Still, he tells the inanimate big bird: "Big ol' jet airliner, don't carry me too far away, `cause it's here that I've got to stay." Sigh. Make up your mind, Steve! Perhaps this ode to vagabond ways was simply reflective of the restlessness of the 1970s? All I remember are crappy clothes and disco. Not a real good decade.

Jet to Jet- Alcatrazz. Screamer extraordinaire Graham Bonnet wails away on this song from the debut Alcatrazz album. As near as I can tell, the song details a tour itinerary gone bad, with a group of washed up white musicians landing on the Ivory Coast of Africa and the ensuing racial/post-colonial tensions. I half wonder if Mr. Bonnet got his inspiration for the lyrics from the circumstances surrounding the recording of Paul McCartney and Wings' Band on the Run album, which was recorded Lagos, Nigeria. The Wings session contained plenty of drama and also contributed the song “Jet.” Related? Mmmmmmm . . .

Coming Home- Iron Maiden. When the singer of the band is a commercial airline pilot and the last few tours have been done in a custom-designed plane with said singer at the controls, you just know that there's going to be a song about "planes" on here from Iron Maiden. As Bruce explains in his pre-song monologue, this song is about touring, crossing time zones, and the feeling they get when they fly home, finally, to the U.K. He sings, in some ways, to his plane- "When I stand before you shining in the early morning sun, when I feel the engines roar, and I think of what we've done . . . ". Bruce, I suspect, is a humanist and talks about looking at the world from 35,000 feet and how there's no sense of borders, no creed, no religions to "divide our earthbound tribes." It's a hopeful message: that we can someday put aside all that purportedly sets us at each other's throats and just realize how interconnected we all are. Here, the band is singing in front of 60,000 plus Chilean fans, which shows their worldwide appeal.

Last Train to Clarksville- The Monkees. Perhaps Penguin Pete's wonderful essay on the Monkee's movie a while back inspired me? Probably, it got me thinking about their "hits" and this one instantly came to mind. An infectious piece of pop, this song examines a transcontinental hook-up, via the steel rails. Slow and steady, I guess. In the video, the lads are all monkey'ing about (as is appropriate) but also finds them in all manner of conveyance- including planes and autos. Eh, a minor quibble and this song is just good fun!

Long Train Runnin'- The Doobie Brothers. My older brothers liked the doobies and the Doobie Brothers. They introduced me to the latter, I've never had much interest in the former. I love the ring-y, clear guitar intro on this song. Ostensibly a song about the Illinois Central Railroad line, this song's catchiest feature is the line "Without love, where would you be right now?" It's a super-funky, song with a great moving bass line and fine guitar work. Yeah, I know, this next statement may offend people, but the Doobie Brothers were wayyyyyyyy better before the overly commercial “Brother,” Michael McDonald, joined them and Tom Johnston exited. Yeah, I said it.

A Passage To Bangkok- Rush. They don't sell train tours like they used, right? In this song, the Canadian trio hop aboard the Thailand Express with the express purpose of getting really high. The travelogue is somewhat quaint- some young Westerners cruise around the world, getting their hands on the best "stuff," and have a good, mellow time. Real world, nowadays: it would likely be the shortest, deadest "trip" these bongheads took, with some unsavory and violent folks out there in the drug world. The song finds them "wreathed in smoke in Lebanon," sampling the "fragrance of Afghanistan," and a stop "in Bogota to Check the Columbian fields." Yikes- take some body armor, you crazy Cannucks! Not to worry, the brochure says "Perfumed by a Nepal night, the Express gets you there." Whew, that's good to know. Now, pass the bong . . .

The Train- King's X. It's hard to pin this one down, as the lyrics are somewhat minimal and don't explicitly say what "the train" is a metaphor for. This song was on their 1996 album Ear Candy and there was some stuff going on in the background of the recording of this album. Originally, the band had Christian leanings in their music and were vaguely identified as Christian rockers. Around the time of this album, doubt and skepticism began to creep in. The song titles and content hint at turmoil over spirituality ("A Box," "Lies in the Sand," and "Sometime"). In 1998, singer/bassist Doug Pinnick came out and was immediately blasted by Christian media for his sexual preference. So, my thinking is that he foresaw some of the disruption that was about to occur when he sings on this song "You leave us all behind, you start to feel the pain." Pinnick now identifies himself as agnostic and is not too forgiving of the Christians that loved him when they thought he was straight, but turned on him when he announced he was gay.

Red Barchetta- Rush. I know, another Rush song, but this one is a classic, so there. A song about a dystopian future, where individual travel (and life in general) are restricted, shouldn't be this fun. In it, the hero heads out to his uncle's "country place . . . outside the wire," careful to elude "the eyes." Hidden away in the barn is a beautifully preserved Italian sportscar (aren't all Italian items racy and fast?), which he uses to speed around the countryside. As this song plays, hopefully while you're driving to and from work, you get that sense of freedom and speed being sung about. Freedom, that is, until the "alloy aircars" chase him down. This is no game, as it is described as "deadly." Brilliantly, our hero comes up with the idea of leaving them behind at an old one-lane bridge, whereupon he rejoins his uncle at the fireside. Spirited, defiant in the face of oppression, and a really humming tune, this is a classic song about cars.

Drive- The Cars. Moody, somber, and restrained, this is not your typical song by The Cars. It's a natural that a song from the band would show up in this blog, and with the title "Drive," well, it had to be. This song is melancholy and recalls a time of my youth that always seemed to be spent pining over girls. The singer asks "who's going to drive you home, tonight?" but at the heart of the song is the possibility of mental problems ("who's going to come around, when you break?") or drug abuse. The video hints at mental problems. A tear-jerker and all the more sad knowing that Benjamin Orr, the bassist and singer on this song, passed away in 2000 from pancreatic cancer.

I'm In Love With My Car- Queen. Drummer Roger Taylor has always had a love affair with cars, racing, and things that go fast. He wrote and sang this song; a gruff counterpoint to Freddie's soaring and Brian's fragile vocal styles. Taylor feminizes his car, whilst also ditching his girl- "rather buy me a new carburetor!" Some of his reasoning may be attributed to the fact that "car's don't turn back, they're just four-wheel friends now!” There's plenty of sexual imagery, though- "with the piston's a-pumpin'!" Naughty lad. This is a fun song and helped keep things light with Queen, a band that could be very serious and complicated in their music.

Paradise by the Dashboard Light- Meatloaf. Talk about sexual imagery! Teenage boys love cars- mostly for the possibility of nocturnal activity with said car not moving and only the dim lights of the dashboard to guide their early, exploratory encounters with the "alien" territory of the female body. The “girl” in the four-wheel loveshack is able to wring the promise of marriage and eternal love from the “boy” before they go all the way. Things don't always end up as you'd expect them to and for a night of passion, the boy is committed to a life of misery. The build-up and tension, the interplay with the baseball announcers, and the eventual outcome (prayin' for the end of time, to hurry up arrive, `cos if I have to spend another minute with you, I don't think I can really survive") an amazing bit of songwriting.

Whatever the motivation- work, restlessness, love of nature, wanderlust, lust, love, etc.- we board planes, stuff ourselves into trains, climb behind the wheel of our shiny automobiles and just go. Music has done a fine job of reflecting that, commenting on it, and the using these modes of travel as metaphors. Vehicles move us and sometimes we are moved- by the journey, by those we leave behind, by what we see on our trip, and by those who greet us upon our arrival. Perhaps in the future singers will wax about piling into their alloy aircars and see the world, or seeing someone, or seeing that someone by the dim, flickering light of the dashboard.