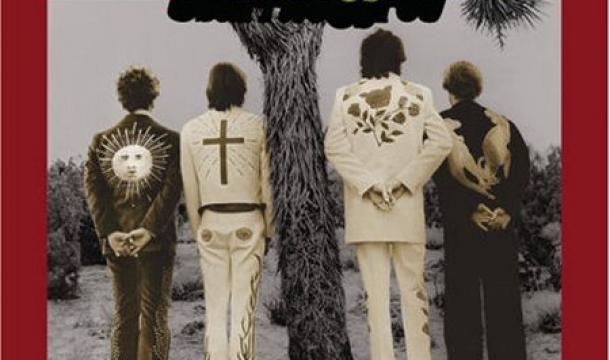 With the name "Flying Burrito Brothers," it sounds like they should be on Cartoon Network's [adult swim], wielding a sour-cream sledge, a salsa shotgun, and a bean blaster in their crime-fighting battle against the Evil Onionhead and the Guacamole Gaucho.

No, there really was such a band. Here they are, in the fleshy, with their song "Sin City":

You must be wondering if we're dragging you off on one of our wild tangents into the dark ghettos of music where we end up tormenting you with screechy outsider art from UBUWeb. Oh, no. We're going to show you how country music in the United States (now the bedrock of Neocon Reaganite Randroid America) has its roots in the weird, liberal, counter-cultural hippie movement, and got adopted by people with Mitt Romney bumper stickers on their Ford F150s only after waiting a respectable time for country rock to shed its buckskin leather smell.

And besides, have you noticed that none of the rock blogs on the web talk about country music? Nuts to that! Let's shatter that wall.

Here's a brief bio about the Flying Burrito Brothers on ByrdWatcher, and right there that should be a tip that the Byrds are somehow involved. Specifically, guitar+vocals lead Gram Parsons was a Byrd before he was a Burrito, at the fourth line-up of the Byrds. Gram Parsons was a character so larger-than-life that it's a shame we won't have space to say much more about him than here's a video of the full album of the Byrds' Sweetheart of the Rodeo under Gram's tutelage:

...and link you to the Straight Dope file on Gram Parsons' bizarre end. You never get to the end of the strange stories about Gram Parsons.

As Frank Moriarty put it in chapter 7 of his master work Seventies Rock: The Decade of Creative Chaos, the Byrds "brought an exciting rock sensibility to the no-frills framework of folk music." And also, Byrd Chris Hillman and Burrito Gram Parsons were in tight as good buddies.

Now if the Byrds don't have blue-state cred enough for you, who's one of the most left-leaning rock stars you can think of? Perhaps Neil Young? Yes, Mr. Golden Harvest himself, has a hook in here, because he played with Cosby Stills Nash & Young, and David Crosby was also a Byrd. Also, after the split with Young, Stills formed his own Stephen Stills Band, four of the members of which (including him) teamed up with pedal steel guitarist Al Perkins and bassist Chris Hillman - from Flying Burrito Brothers - to form Stephen Stills' Manassas. Here's all of that in some rare TV footage:

You can still hear the influence. Country rock comes from a union of folk and Western rock forms. And what we call "country and western" today really comes more from country rock than anything else, even though it's slowed down to ballad tempo now and has all the weepy lyrics about losing the farms in the heartland.

Stills is also connected to Al Kooper, a name you're far more familiar with from the Bob Dylan tribe. But here again, we have to skip over a lot of fun detail and post a full album play of the highly-sought after collector's album Super Session, with Al Kooper, Stephen Stills, and Mike Bloomfield. Never noticed that connection, did you?

Check the second half of that album, starting at about the 29 minute mark. The shift from Bloomfield's heavy blues to Stills' country rock makes this sound like two different albums spliced together, and yet Kooper manages to provide just enough adaptability to bridge the gap. It's an amazing album with even more amazing stories behind it.

According to page 133 of Al Kooper's autobiography Backstage Passes and Backstabbing Bastards, when Mike Bloomfield flaked out of the recording sessions with Kooper, he was desperately sweating a replacement and had to wing a negotiated deal between his label (Columbia) and Stills' label (Atlantic) to come finish out the album - in exchange, Columbia had to lend out Graham Nash (also a member of the Hollies) to the first lineup of Crosby Stills and Nash.

While we're on Young and Stills (and in case anybody doubts the counter-culture roots of today's conservative country), don't forget that Young and Stills were also the most integral parts of Buffalo Springfield. You young 'uns might still not know who we're talking about, so here's that song you hear in movies about the '60s:

Go in the other direction from Neil Young, and follow guitarist+vocalist Bernie Leadon from the last gasp of the Flying Burrito Brothers to joining with Glenn Fry, Randy Meisner, and Don Henley to form the Eagles - and remember that Linda Ronstadt was part of that genesis story. Leadon is right here on the Eagles' first self-titled album, with "Take It Easy":

Now you have a couple more famous, Billboard-charting songs, so you should recognize them. But you can also definitely hear modern country music in "Take It Easy." And yet, it still contains just a dash of Burrito and Byrd and Buffalo. We're a long way from [adult swim] now.

OK, now to wind things up: How did country music start out born from the bosom of the counter-culture, and end up sewn into the jean-stitched hip pocket of our modern American cowboy? Simply put: The Baby Boomers grew up. They left the left and united with the right, long about the 1980s or so - coincidentally, right when they hit middle age and started thinking more about their retirement than their protests. Country music had no choice but to move with them or lose their base, and after a while, the new generation took over, pulling country's center from California to Texas.

Don't let it happen to you.