In Which We Yank Some Songs About Hair Out By The Roots... 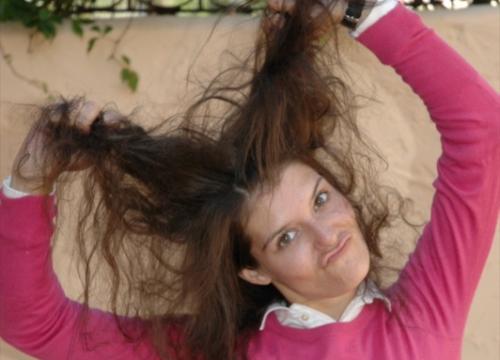 What is it about hair, anyway? Whenever a generation rebels as a unit, the first thing they all do is something radical with their hair. And then it becomes a big deal, separating the "ins" from the "outs".

Of course, the punk and Goth movements pretty much topped out everything there is left to do with hair, so it's not as shocking as it once was. You could go to clown school and sculpt your locks into a purple-and-blue working satellite that transmits its own Twitter stream, and people will just look at you deadpan and go, "Do you dye your hair?" (No, it's genetic; my mother was a parrot and my father was the Easter bunny.)

But just 50 years ago, merely having long hair was both all it took to belong to the counter-culture, and a very risky thing to do! Many films get it wrong when they show kids with long hippie hair in the '60s, because the kids act too much at ease, secure in their safety. Easy Rider got it right when the group stops in that diner where the local sheriff and rednecks heckle them and later attack them in their sleep; they were fearing for their lives as soon as they sat down in that greasy-spoon eatery, and they were right!

Scott McKenzie's "San Francisco (Be Sure to Wear Flowers in Your Hair)" set the tone for the late-'60s counter-culture and flower-power movement. It was written by The Mamas & The Papas to promote the 1967 Monterey Pop Festival. This is the song they all play in the films now whenever we're in the '60s - from Forrest Gump to The Rock.

George Thorogood's "Get A Haircut" is closer to the national attitude at the time. "Get a haircut and get a real job!" was as good as a credo for much of America. Crosby Stills Nash & Young make an even better point in 1970 with "Almost Cut My Hair" from their Deja Vu album. Just look at the lyrics: "It increases my paranoia, Like looking in my mirror and seeing a police car." That's what it was like in the '60s: having long hair was as good as walking around with a target on your back. Another common redneck jeer was to equate long hair in men with homosexuality, which the Barbarians noted in their 1960 novelty single "Are You a Boy or Are You a Girl?" And there, we have the bookends for the decade.

Of course, there's the Broadway musical Hair, along with the title song of the same name, which brought the situation to a head (pardon the pun). There was violence, in the form of bombs, bomb threats, and arson, where Hair was performed. They were motivated more towards the content addressing race, drugs, and sexual freedom, and not so much by the hair, but the point was that the musical was saying "You set the bar at hair? Guess what, long hair will be the least offensive thing in this show!"

The Beatles made their entrance with their "mop tops", actually kind of a mid-length compromise cut, but behind them came the wave of British musicians. The battle was much more grim in the United States, where even the Monkees caused a stir when broadcast on US networks. Sonny Bono, sans Cher, made the protest hit "Laugh At Me", defying the madding crowd: "Laugh at me, and I'll pray for you."

Modern bands have a very "get over it, it's just hair" message, with India.Arie's "I Am Not My Hair", The Waifs' "More Than A Haircut", and The Clap's "Your Hair Is More Interesting Than You'll Ever Be." But, eh, considering what a pitched battle it was, perhaps we'd better not let our guard - or our hair - down just yet.