Unknown Songs From Ubuweb That Will Bend Your Mind - part 1 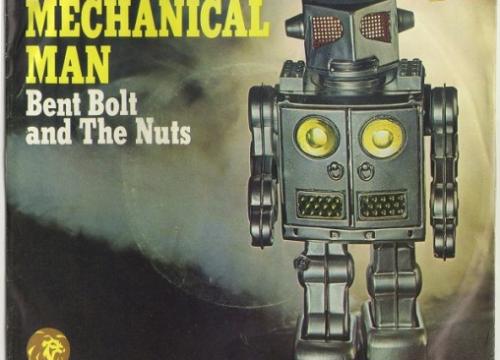 Hey, here's an idea: Let's have an adventure and discover some different music for a change.

After all, we can't keep regurgitating the same Top-40 popular bands over and over, right? We've written enough about Radiohead and Black Sabbath.

We've raved before about the Ubuweb experience, but this sparkling gem of offbeat culture really deserves more love. This time, we've decided to focus on the 365 Days Project at station WMFU / Ubuweb, which focuses on posting a new audio every day from the archives of Outsider Art. It ran its course twice, once in 2003 and once again in 2007. Maybe we can encourage them to come up with a third year.

What is Outsider Art, you ask? It's simply art produced completely separate from any known and accepted culture of art. This isn't just Indie stuff - "Indie" just means that you produced it independently without the backing of a studio or sponsor, but still intended it for commercial appeal and consumption. Outsider Art throws all that out the window - it's done because the creator wants it done, and formal training, theory, methods, and society in general can go fly a kite.

Some of what we're about to share with you is very, very bad. And some of it is very, very good. Some of it will appeal to only a tiny niche. All of it is guaranteed to be mind-blowingly original, raw, surprising, and something you've never heard before. We're not going to bother here with the amateur stuff of the collection. We're not here to mock the unskilled for their honest effort. We're here to discover what may be the undiscovered genius from another planet, the performers who are both undoubtedly proficient and exceptionally off the beaten track. Put on your pith helmet and come along on our safari, as we select some of the more notable audio tracks from Ubuweb's 365 Days Project...

We'll open with a very nice, peppy little ditty. What's so odd about this song? He's playing on a Hammond organ, the little home electric organs that were the amateur's version of the synthesizer from the 1930s until around the 1980s, when they went out of style. You'd see piano and organ stores at the mall with some sales guy out there pumping out "Gloria" or "It Had To Be You" for the lethargic crowd. But Chris Anderson took one home and decided to become the undisputed master of Hammond organs forever.

Suggested listening: Get YUM! Brands to buy the rights.

If the name sounds familiar, that's because this is the Murry Wilson, father of the Wilson boys Brian, Dennis, and Carl in The Beach Boys. He was fired by the band as their manager, so, cast adrift, he floundered around with his own indie projects and got a band together called "The Sunrays". As this track shows, at one point he decided that composing commercial jingles lied in his future. So it's a marching band number for Kentucky Fried Chicken. Never used, as far as anyone can tell today.

Suggested listening: Just put it on your playlist and don't tell anybody who it is. Let 'em guess!

There isn't much to tell about this number, whom we'd never know about without the Outsider scholar who brought us Songs in the Key of Z. Garage band + California + acid trip + worship of The Doors = Arcesia, who released an actual couple of albums and really, really, really, REALLY! wanted to be The Doors so bad they could taste it.

Suggested listening: The commercial for your computer dating site.

This one almost doesn't qualify as an Outsider, since it was a professionally produced recording, with the MGM Music logo on it no less. It's also been a staple of Dr Demento. It's even all over YouTube and blogs. Shame on us for posting such a mainstream song in this list! But if it's your first time discovering it, you're welcome. And by the way, that is neither Cheech Marin nor late AC/DC singer Bon Scott on vocals, because both of those guys could do the throaty growl that this vocalist uses.

Suggested listening: Play it for the next square who asks what being on acid is like.

There's no mistaking the famous game show host, from Family Feud and Match Game. How or why or whose idea it was to have him do a confused psychedelic mish-mosh like this, is a mystery forever. We've covered actors who dabbled in singing careers before - including a special section just for the Trekkies - but this one never made it onto the charts so we have to dump it here. Gosh, wonder why? Wasn't this horrifying enough without the final line "Because I am dead"? Did it really have to go that far?