Things To Hate About Christian Music 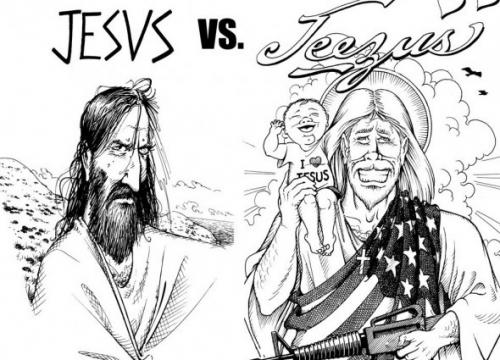 Good morning America, how are ya? You're looking kind of... spotty, like you're violently divided into red and blue patches, as if you just had the worst election nightmare of your lives. In this last election, Christian conservative Republicans played the vampires while the rest of you played Buffy with a wooden stake in one hand and garlic in the other. Recreational drugs, gay marriage, women's rights, and voted Obama back in over a Mormon - all in one showdown election! Did we miss anything? Did some Arizona town out there pass a law allowing nude opium orgies in the streets and we just missed it?

Anyway, it seems that quite a lot of you have the hates for Christians. And I'm sure there's some Christians reading right now who are feeling pretty offended from all this. Let me assure you, before you flame us to pieces at what we're about to do, that this offends me, too, your humble author of this piece, as I was raised Baptist Christian myself. Nevertheless, we're big enough to take a few slights in stride, right? Perhaps those of us who find it in their hearts to seek a deeper understanding of the matter might even agree with the list, no matter our faith, because let's face it, every genre has its low points; gospel is no exception.

But for those of you who are atheists, non-Christian, agnostic, science-believing, Pastafarians, or Satanists, grab some popcorn and kick back while we see who likes it when it's their turn up on the cross!

We know plenty of faith-holding church people who hold Boone in equal disdain. And one can hardly blame them! Along with a series of prickly moves in politics and his 2009 slander against president Obama, we have this... Did you just have to, Pat? Even the church pilloried him for his 1997 In A Metal Mood phase, because he managed to simultaneously offend everybody at once. But even this feat pales in comparison to having given the world:

"You Light Up My Life" was a nationwide hit in 1977, and is widely renowned as one of the worst things to happen in music right alongside the worst of the '70s, right up there with "Afternoon Delight" and "Feelings". As this blogger puts it: "history has turned its back on the song, putting it on every Worst #1 Hit Ever list and declaring it an unlistenable piece of ancient history." The thing is, it sounds like a love song, but it was actually supposed to be about Jesus. And the problem with females singing love songs to Jesus is they start to sound a little... carnal... you know what we mean? Add to this that the song spawned an unholy film of the same title, also premiering in 1977, which was widely hated as well.

Let's move on from the Boones before we start breaking things in a blind rage.

Why, Christians, why why why? This doesn't work. Dressing Jesus up in leather-and-studs (thanks a LOT, Pat Boone!) does not make him more appealing to the kids, it just makes you all look pathetic. You're basically saying "Gee, I wish we were as cool as those guys out there!" Christ - listen up - DOES NOT NEED TO IMITATE ANYBODY. If Christ is to have any appeal, please let it be his own. Christ should be honest about who he is, not wearing a mask.

And what bountiful hate there is for Christian metal! Stryper, with To Hell with the Devil - we're confused, are you for or against here? "Unblack metal" - ugh! Bloodgood, Ultimatum, Frost Like Ashes, Mortification, the list goes on and on. As author P.J. O'Rourke (right-wing Neocon though he is) put it: "I found God and lost my talent."

But here's one piercing tragedy at the root of the thinking that spawns "Christian metal":

Christian music has no sense of humor

This song - ask Chris Rice yourself if you don't believe us - was written "to mock the commercial-Christian tendency to make a Christian version of everything." You know, like "Christian metal". But Christian music fans were blind, utterly blind to the satire and embraced the song at face value. Rice dumped the song from his act, Christians dumped him, end of story. That's what happens when you try to be funny in church.

And now, for something worse, hated from both within and without the fold: Hillsong is the classic example of the creepy, commercialized, stadium-mega-church where you don't know if you're dealing with a corporation or a religion anymore. On Wikipedia, they're called McChurches. We're going to use Hillsong as an example because they're based out of Australia and hence far enough away not to bother killing the author of this article. Here is one of the songs typically to the McChurch service, "Days of Elijah" by Robin Mark:

And the lyrics version is here because you should read along. You should replay it a couple times and really study it. Does it speak to you? Does it witness to you? Certainly, it self-righteously preaches at you. Certainly, every line of the lyrics are taken from scripture. But what does it really say?

It says nothing. It is empty. It is soulless. It's main thrust is "You're here with us listening to this, and so you're better than everybody else!" It is to Christianity what wax museums are to people. It is a song written to make money from God-believers, exactly like 1000 McChurch songs before it and 1000 McChurch songs to come after it.

Well, we could go on all day, but let's test the waters first and see how this post is received. What do you think, readers? Have we given the non-Christians evidence to solidify their stance, have we given the Christians something to think about, or have we called out some wanna-be Christians on their empty, faithless non-music?