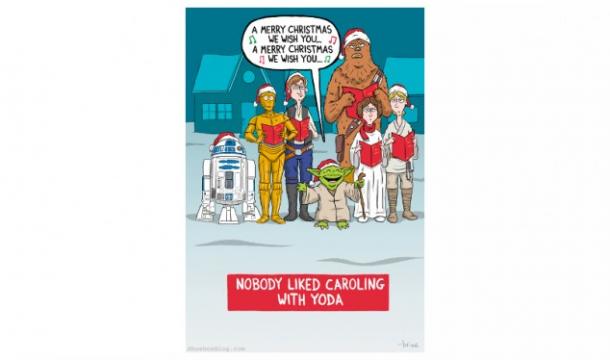 You know what always gets us in the holiday spirit? Star Wars! Yeah, it was probably all those Star Wars toys we got every Christmas that does it. So we're going to take a musical tour of Star Wars music - without once mentioning John Williams! Yeah, alright, so we mentioned him once. The point is that we're looking for Star Wars music excluding the soundtracks from the six (so far, Disney!) theatrical films.

Nobody beats ol' Weird Al. Only he could think of putting Don McLean's "American Pie" together with the first Star Wars prequel and have them fit so perfectly, performed so flawlessly, staged in a video so hilarious. While we're at it, Al did it before with "Yoda":

Now, we have to go back to 1977, when Star Wars first came out. And God help us, it got disco-fied by the obscure band known as Meco. And here was the whole thing danced out by... cowboys and cowgirls... on the Dutch TV show TopPop - not to be confused with the British Top of the Pops. Meco cashed in like the greedy little gold-diggers they were with a whole album of Star Wars themed music called Star Wars and Other Galactic Funk. By the way, "space disco" is an actual genre. Don't dis it, homes.

Hey, Blink-182 at least did a decent job, with this straight-up tribute! Kind of more palatable than their usual fair, even. Pardon our brevity, we've light-years to go.

We're raved about Kevin Smith's excellent soundtrack in Clerks before, but this song demands its due here as well. It really captures the essence of the ol' walking carpet. And speaking of walking carpet, here's another tribute to the wookie's hairiness:

[Christmas in the Stars] What Do You Get a Wookie For Christmas (when he already owns a comb)?

See, there was this nice little album called Christmas in the Stars which was all Star Wars themed Christmas songs. And this is a cute little song where a bunch of droids are sitting around composing a Christmas list and are stuck on Chewbaca. Note that this song blithely passes over the notion that they can cross Chewbaca off because wookies celebrate Life Day, because that was only mentioned in The Holiday Special That Shall Not Be Named (but we're naming it anyway at the end of this post).

A C-3PO rap we tracked down

If we're including this Star Tours commercial bit, just imagine what we were forced to leave out!

Gotye parody: "The Star Wars That I Used To Know"

Don't groan yet! Remember what we said about the end of this post? Save some groaning for that. You wouldn't want to strain your groaning muscles now, would you?

Yeah, we can't believe what they're doing with home digital video editing these days, either. Not quite catchy enough to overcome how unlistenable it is.

We're not about to risk being torpedoed by Lucas' lawyers, so you don't get our bootleg of the infamous Star Wars Holiday Special. Instead, watch the infinitely more enjoyable Nostalgia Critic review of the same. We have to include it here just because of the songs performed by Diahann Carroll, Jefferson Starship(!), Bea Arthur, and Carrie Fisher. They're by far the most tolerable parts of the special.

Now aren't you glad we got this out of our star system?