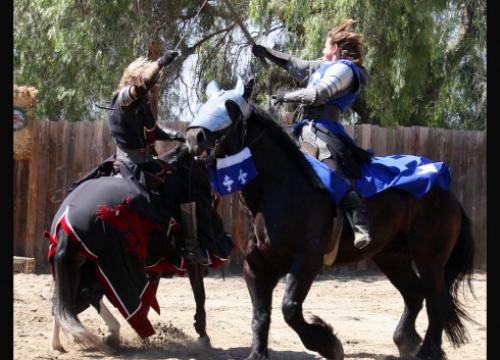 In 1968, Simon & Garfunkel released "Scarborough Fair" on their album Parsley, Sage, Rosemary and Thyme, and introduced the world to perhaps one of the most enigmatic folk song experiences ever to hit the radio. It didn't help matters that Simon and Garfunkel had taken a historic folk ballad, which traces its history at least as far back as the 17th century (and the subject's history back to the 13th century), taught to them by English folk singer Martin Carthy, and remixed it with an unrelated melody and a lot of creative interpretation, and then released it with no notice given on the album that it was anything but their own original idea.

Where to start? Scarborough Fair, itself, was an annual event of trading, entertainment, and feasting for traders, merchants, and various hangers-on who all gathered along the North Sea coast of North Yorkshire, England. This went on from mid-August to the end of September, from about the years 1253 to 1788 AD. So it was an annual event that kept going for 535 years, and it attracted crowds that came from all over Europe and Asia. Not only could goods be traded, but food and refreshments were served, and entertainment was present in the form of jugglers, minstrels, bards, jousting tournaments, and various buskers.

If you're thinking that this sounds just like a modern "Renaissance Faire", complete with the late-summer / early fall timing, you're absolutely correct; that's just the event that modern fairs are based on!

OK, now what's going on in these lyrics? In the first place, don't rack your brain over the refrain "parsley, sage, rosemary and thyme" - it's a common folk-ballad way of filling a line with a random bit of fluff, intended to keep the meter. It also might be a recipe for a love charm, or just tasty poultry seasoning.

The song's traditional structure is that of a teenage lover sending a message via a page who's going to the fair. But the message is in riddles, asking the other to do impossible tasks:

...in order to win their heart ("then she'll be a true love of mine"). Simon & Garfunkel simplify it to having just the male sending a message to the female, but traditional versions of the song have a duet between male and female, with both lovers commanding the other to do impossible tasks (presumably sending a page running back and forth with the messages). The tasks were expanded to a much longer song.

Alright, but why? Well, this was actually a little game they were playing, and it isn't too hard to figure it out, because even modern teens play "hard to get" with the target of their affection, don't they? These riddles were a form of intellectual teasing - a sign that in fact both sides were in fact quite smitten with each other.

Now, guess what? This whole tomfoolery was based on an even older song called "The Elfin Knight", a traditional Scottish folk ballad dating to the 17th century, whose full lyrics would be almost impossible for anyone without a degree in language studies to translate. But variants have an elf (or sometimes an imp) and a human woman playing the same lover's game of swapping impossible demands or unsolvable riddles in order to either win or escape the other. All of this relates to "Lady Isabel and the Elf Knight", an even older class of traditional ballads that continue in the same theme.

In fact, this whole swapping-riddles thing goes back possibly to the dawn of man, and you'll recognize elements of it in fiction of every stripe from Rumplestilskin (spinning straw into gold and guessing a stranger's name in three tries) to The Hobbit (Bilbo and Gollum play riddling games when they first confront each other).